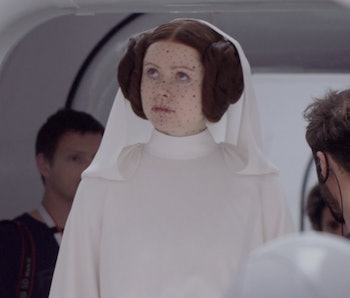 After receiving the Death Star plans from her Rebel operatives, Princess Leia Organa lead a galaxy to a new era of hope, but before that, she had to get a digital face job. New behind-the-scene glimpses have emerged of just what Leia looked like in Rogue One before digital effects.

On Friday, the digital download of Rogue One was released, and in it, secrets about young Leia were revealed. Actress Ingvild Deila played Leia in Rogue One, and her true face was partially obscured by digital effects to make her look like the young Carrie Fisher, circa 1977. Speaking to the Hollywood Reporter on March 17, she said it was actually “the smallest role I ever had in terms of acting.” But now, thanks to the digital release of Rogue One, we know what she looked like as Leia, with her own face.

The final special feature on the digital release of Rogue One: A Star Wars Story is titled “The Princess and the Governor,” which details how the Industrial Light and Magic team, led by John Knoll, recreated both a young Carrie Fisher as Leia and Peter Cushing as Tarkin.

Some of the stories have been told before, but the images of these contemporary actors as the classic characters are striking. Though the process of becoming Leia removed the actress’s real face, Deila says it’s “a great honor” to have become the character.

In the mini-documentary, Delia adds that “it took a lot of preparation to get ready for this character, because everyone remembers Leia very well…they spent a lot of time on my hair, obviously.” The actress reveals a “big chunk” of hair was added to make the famous Leia buns.

Animation supervisor on Rogue One, Hal Hickel, also says that getting the big, hopeful smile “just right” was “such a journey.”

Rogue One is out today for digital download from multiple platforms, including Google Play, iTunes, Vudu, and others. It will release on Blu-ray and DVD on April 4.