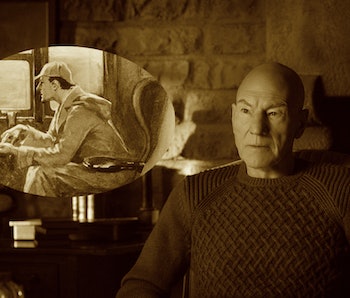 When it comes to fan fiction, it's hard to argue with the influence of both Sherlock Holmes and Star Trek. From Holmes, the world got its first powerful fan organizations. From Trek, you got the concept of "Slash" fiction, which began with Kirk/Spock. So if you like fanfic, thank the ghosts of Sir Arthur Conan Doyle and Gene Roddenberry.

On some level, Star Trek: Picard is a blend of both kinds of old-school fanfic. Two books — one by showrunner Michael Chabon — clearly inspired the basic premise of the current Trek series, making it a kind of Sherlock fanfic. In space. Spoilers for Picard episodes 1-6 ahead.

The canon of Sherlock Holmes consists of 56 short stories and four novels. In one of Sir Arthur Conan Doyle's final short stories with character, "His Last Bow," we find Holmes retired in the English countryside as a bee-keeper. This one glimpse into Holmes's future influenced numerous authors for decades. One of them is Michael Chabon.

In 2004, Chabon published a novella called The Final Solution: A Story of Detection, in which the retired, beekeeping Sherlock Holmes returns to action to solve a perplexing mystery. Like Picard in his vineyard, this version of Holmes is pushing 90 and isn't quite as spry as he once was.

This connection isn't accidental. In an interview with Roling Stone, Chabon said: "We had the clue from the series finale of TNG about the vineyard, and there was a lot that was appealing in that. I don’t know how the other writers felt about it, but to me somehow there were echoes of Sherlock Holmes in that, one of my other favorite characters. I wrote fan fiction on that."

There are plenty more pastiches and pieces of fanfic centered around Sherlock Holmes coming out of retirement from beekeeping. In fact, a different book by Mitch Cullin, A Slight Trick of the Mind, old man Sherlock comes out of retriment for one last case, with a slight rub; he's kind of losing his mind. This book served as the basis for the 2015 film Mr. Holmes, which starred Ian McKellan as the elderly version of the detective. As any card-carrying nerd knows, Ian McKellan is longtime BFFs with Patrick Stewart — a friendship which was calcified by both of them working together in the X-Men franchise.

Now, this isn't to say that McKellan's turn in Mr. Holmes inspired Stewart to do something similar with Jean-Luc. But, it's interesting how close this concept is orbiting to the genesis of Picard. Although Stewart has cited his work on Logan as a reason he agreed to do Picard, he's not a showrunner. Chabon is a lifelong fan of both Star Trek and Sherlock Holmes.

Chabon isn't the first guy who wrote a Sherlock Holmes novel and then also got involved with Star Trek. The director of both The Wrath of Khan and The Undiscovered Country, Nicholas Meyer, made his career with the 1974 novel The Seven-Per-Cent Solution, in which Holmes is cured of his cocaine addiction by Sigmund Freud.

Funnily enough, Chabon says Meyer's Holmes novel was a huge influence on his own work. In an interview with yours truly back in 2019, Chabon said outright:

"[Meyer] was a huge, huge influence on me. I honestly don’t think I would be a writer without him... I said to myself: wait a minute; I can write my own Sherlock Holmes story — you can do that? Before that, the first thing that I wrote [as a child] was a Sherlock Holmes story. I loved doing it. But it’s not hyperbole, without Nick Myer and Seven-Per-Cent Solution, you know, it wouldn’t have happened the way it did."

With Picard facing possible terminal illness and trying to unravel one last mystery, the threads of various pieces of fanfic seem to be drawn together, more tightly than a Tholian web. In the same way "Remembrance" gestures at "All Good Things..."; Chabon and Meyer both make specific references to older Doyle canon Holmes stories in their respective Sherlock books. While Meyer was able to slip in some Sherlock Holmes references into his Star Treks (Spock quotes Holmes in The Undiscovered Country, and might be related to Sherlock) Chabon has yet to have Jean-Luc actually quote the great detective.

With four episodes left of Picard, the game is still very much afoot.