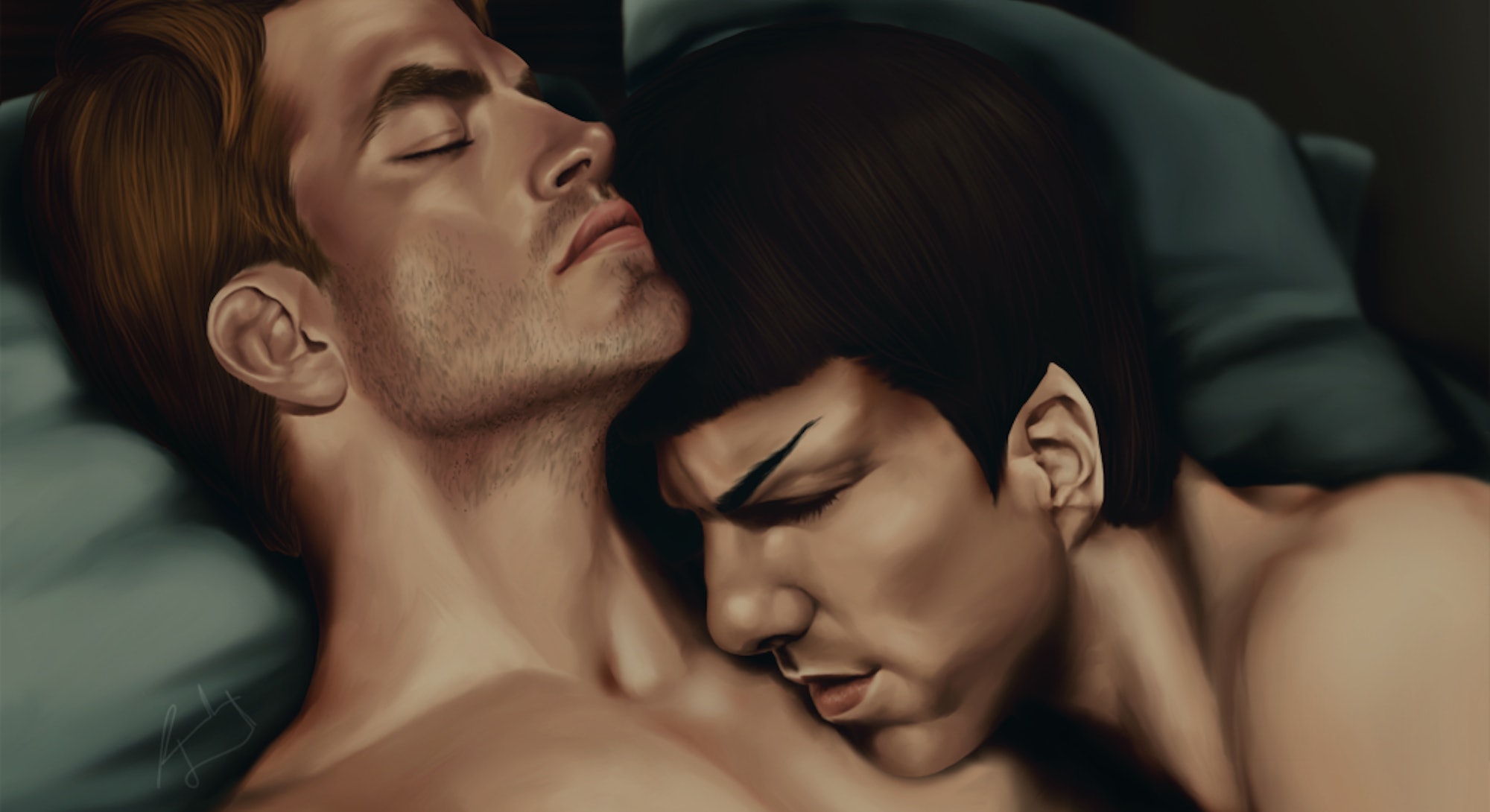 As the first male characters to become the subject of erotica written by devoted fans, Star Trek’s Mr. Spock and Captain Kirk are the godfathers of slash fiction. But the question remains: Would they really do it?

After a thorough investigation, we think it’s pretty damn likely that they’d at least experiment.

Some context: Spock belongs to the alien species of Vulcans, who are best known for having pointed-ears and applying logic to every aspect of their lives. A less heralded quirk of their biology is the fact that they have a lot of sex. Written by Theodore Sturgeon, the original Star Trek series episode “Amok Time” established that Vulcans mate every seven years during a biological event called “pon farr.” It’s a time of “madness,” in which their horniness will result in death unless it’s satiated. With that in mind, one pioneer of Kirk/Spock erotica thinks there are all sorts of good reasons for Vulcans to do it outside of their mating cycle.

“There’s the biological imperative of pon farr, but there’s nothing to say there can’t be intimacy outside of the actual mating cycle,” author Della Van Hise tells Inverse. “We certainly saw intimacy between Spock and Leila in “This Side of Paradise.”

Van Hise was one of the first Kirk/Spock erotica writers, and then in 1985, authored a legit Star Trek novel called Killing Time. Ostensibly, the plot of the book is all about an alternate timeline which results in Kirk as Spock’s subordinate, not the other way around. There were two editions of Killing Time published by Pocket Books, because the first version “was recalled by the publisher, re-edited, and re-issued… all without so much as even explaining to me precisely what the hell was going on,” Van Hise says.

Della Van Hise didn’t have to get permission to author some of the most explicit Kirk/Spock fan fiction in the ‘80s. And yet, she insists that she did not include any racy material in the first draft of her “real” Star Trek book. Numerous fans have documented the changes from the first edition to the second edition over the years, and most of it has to do with Kirk noticing the “warmth” of Spock’s hand during a mind meld, and not any long-rumored Vulcan ejaculate.

Still, Della Van Hise believes Spock would totally do it with Kirk. After explaining that she thinks of Spock’s Vulcan logic as his “programming,” she said she believed there could be ways for him to subvert it. “Spock is one smart cookie,” Van Hise says. “And I think he would come to see not only beyond, but through the programming. What he might do after that? Who’s to say?”

In contrast, one of the original writers for Star Trek — Script Editor Dorothy Fontana — believes there is nothing going on between Kirk and Spock other than friendship.

“Some people feel that there’s a romantic connection underlying the relationship between Kirk and Spock. Not true,” she told Inverse. “The producers, writers, directors, and actors played it, or wrote it, or directed it, as a true friendship that was reached through the years and the adventures shared by these characters.” Because Fontana practically invented these characters, it’s hard to debate with her assessment of what they might not do in “reality.”

But Kirk/Spock persists nonetheless, in part due to subtext fans found in the original series, and then later, in the rebooted movies.

“I think it is important to note that Kirk/Spock was largely created by women, pretty much solely by women,” Wendy Mays, the host of the podcast Pet Cinematary and something of an expert on Kirk/Spock slash, tells Inverse, “Slash developed out of the fact that the deepest relationship Kirk and Spock had on the show was with each other. Women on the original series were usually throw-away characters, without much development. Since the series was so short lived, naturally, fans wanted more.”

As Mays points out, fans had some inspiration directly from the original show. In original series episode “Shore Leave,” when Kirk is getting a back rub from Yeomen Barrows, he mistakenly thinks the rub is from Spock. He even says, “dig in there Mr. Spock,” before he realizes his mistake. Perhaps not coincidentally, the episode was written by Theodore Sturgeon, the same guy who wrote “Amok Time” and invented the entire idea of Vulcan mating cycles to begin with. And in “Amok Time,” the only thing that breaks Spock out of his need to mate with the female Vulcan named T’Pring, is the fact that he thinks Kirk is dead. As Spock says in the episode, “When I thought I had killed the captain, I found I had lost all interest in T’Pring. The madness was gone.” Uh-huh.

The contemporary reboot Star Trek movies gave Spock the female, human love interest of Uhura, but that doesn’t mean these films shied away from playing up a little bit of Kirk/Spock action. In 2013’s Star Trek Into Darkness, Spock is visibly upset when Carol Marcus is assigned as a science officer aboard the Enterprise, mostly because Kirk is obviously flirting with her.

The final legacy of the legitimization of Kirk and Spock’s possible sexual relationship arguably exists in this movie, but also the one that preceded it. The first J.J. Abrams Star Trek film has a setup that bears more than a little bit of a resemblance to the basic premise of Della Van Hise’s infamous book in 1985. Could the sexy subtext be there, too? “Anyone who read the book and later saw the first reboot Star Trek movie in 2009 might just recognize the plot of the book on the great big screen,” Van Hise said. “Captain Spock. Ensign Kirk. Sound familiar? It did to me.”