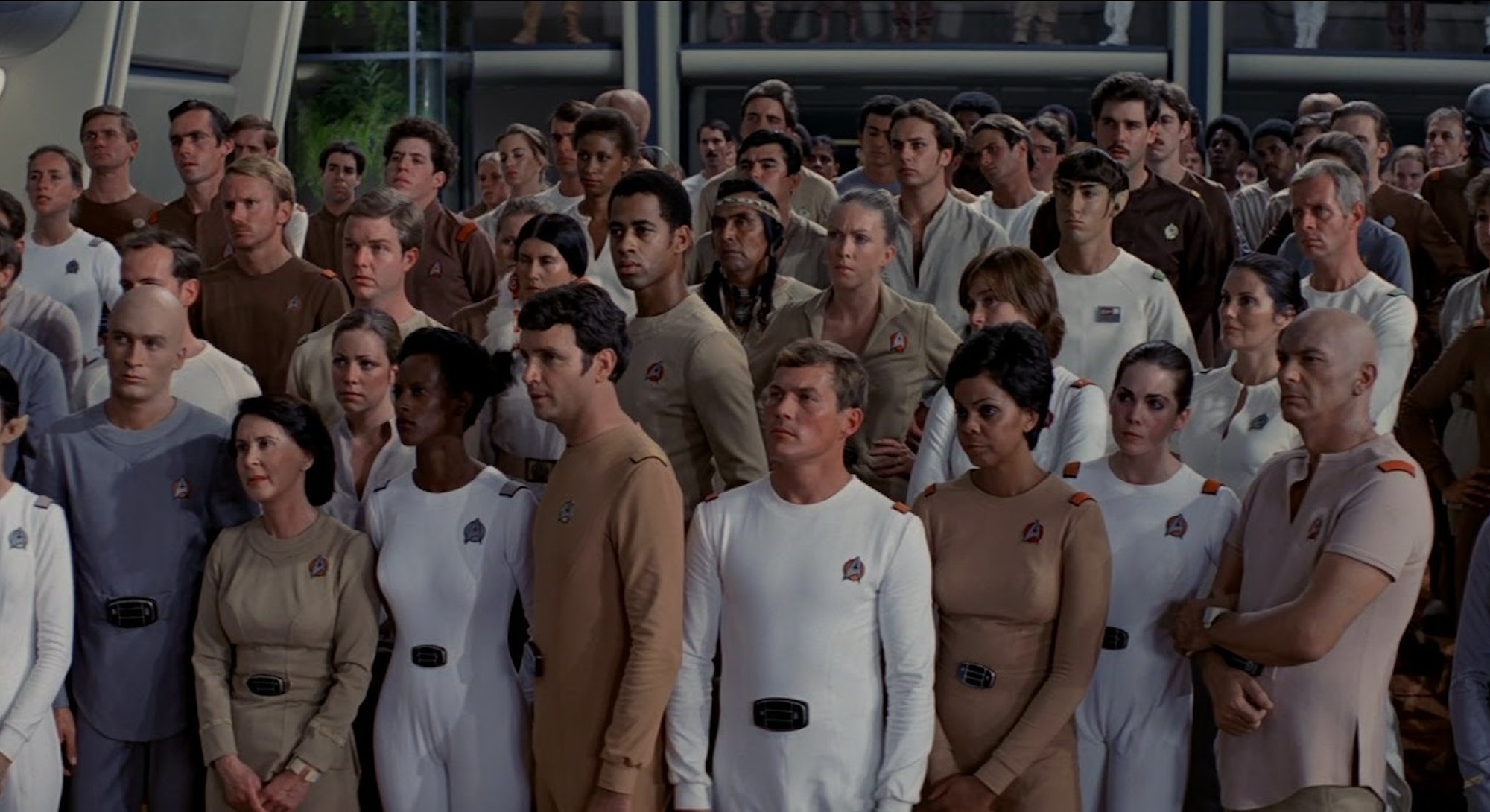 Today, Star Trek celebrates 50 years of boldly going where no multimedia enterprise has gone before. As tributes pour in, much of the credit for the franchise’s long-running success goes to Trek founder Gene Roddenberry and his hopeful vision for the future. And yes, the Great Bird of the Galaxy is responsible for the creation of Star Trek, but in retrospect, it seems more like Roddenberry discovered this wonderful, expansive fictional world, not invented it. To ascribe all that is good about Star Trek to the vision of Gene Roddenberry is like saying the planet Saturn is beautiful because Galileo spotted it one night through his telescope.

The reason Star Trek has endured for 50 years is actually because it wasn’t any one person’s vision at all. Instead, it has been an ongoing collaboration and fusion of many visions, refined by literally hundreds of artists. In his memoir The View from the Bridge, Nicholas Meyer, the director of the seminal film The Wrath of Khan, writes, “… each Star Trek episode (whether television or film) is distinguished by the writing and directing personalities of those who create them.”

“I think [Star Trek] began life as an adventure story,” Melinda Snodgrass told Inverse. “But it became a vision of a possible united Earth where color, creed, and gender didn’t matter.” And she would know. Snodgrass was the story editor for Star Trek: The Next Generation in 1988, a version of Star Trek that emphasized more conversation and less adventure. During her time there, Snodgrass also penned one of the most memorable Trek episodes of all time: “The Measure of a Man.”

In her script, the android Data must defend his right to live in a court of law. More than 20 years after the original series aired in the 1960s, this episode still remains one of Star Trek’s finest, because it asks provocative questions like, “Will we grant advanced artificial intelligence the same rights we’ve given to other kinds of life?” Far from being utopian or open-minded, the majority of Starfleet considers Data a machine and want him dismantled, putting Captain Picard in the minority of humans who want to uphold Data’s inalienable rights.

“I went to law school and spent three years working as an attorney,” Snodgrass explained. “The kernel for [the story] was the infamous Supreme Court decision Dred Scott v. Sanford, which said a runaway slave was property and not a person.”

As Snodgrass shows, if you think the writing staff on each Star Trek series was exclusively populated by wide-eyed, idealist, sci-fi geeks, then you’re not seeing the whole picture. The recently released double-volume oral history, The 50 Year Mission by Edward Gross and Mark A. Altman, highlights many of the franchise’s unsung heroes, including Michael Taylor who wrote the beloved Deep Space Nine episode “The Visitor.”

The episode focuses on Jake Sisko, who sees himself grow into an old man as his father is whisked away into a time vortex. Taylor says he struggled to make rent even while writing for the show; he worked a part-time job doing a “word processing gig at a big Swiss bank” in New York when the episode he wrote aired in 1995. There are no ivory towers or glamorous backgrounds for the various writers of Trek. Largely, over five decades, these writers have been from the working-class.

The tone of Deep Space Nine was grittier than The Next Generation’s in the same way that The Next Generation was calmer and more ruminative than the original series. Deep Space Nine’s stories were more stationary — probably because the whole thing took place on a space station — rather than a traveling space ship. In the history of Trek’s diverse narratives, the more things change, the more they actually do change.

When it all started in 1966, the adventure-driven original Star Trek recruited some of the era’s biggest science fiction authors, including Harlan Ellison, George Clayton Johnson, Robert Bloch, and Theodore Sturgeon. But most Trek scholars would agree that the efforts of Dorothy Fontana (credited as D. C. Fontana) were even more integral to the 1960s Star Trek series.

“I feel [Star Trek] started with Gene Roddenberry’s vision of the future, but many people added elements as the characters and stories grew,” Fontana said, “But our stories always had a core understandable problem and the question — how do we make this work?”

While the original Star Trek didn’t have a traditional writers’ room, Fontana, along with the “other Gene” — producer Gene L. Coon — served as de facto showrunners. In many ways, it was Fontana and Coon, not Gene Roddenberry, who made us fall in love with Uhura, Bones, and Spock. “Coon is definitely an unsung hero,” Star Trek historian Ed Gross told Inverse. “So much of what you love about the original series comes from him.” It’s also notable that though Gene Roddenberry continued to get credit for creating Star Trek, he did technically leave the original show as a producer before its third season. Yes, he shepherded his creation, but only up to a point.

By the time the show went off the air in 1969, Roddenberry was not really involved. Out of the 79 episodes in the original series, Roddenberry is given writing credit on 16 of them and of those, he the sole writer on only two.

While the ‘60s Trek continues to be the bedrock for so many Star Trek fans, certain key episodes of the 1987-1994’s The Next Generation defined Trek for a more contemporary fanbase. A big part of the success of TNG and its subsequent spinoffs — Deep Space Nine, Voyager, and Enterprise — is connected to writers who didn’t necessarily grow up with or revere the prior installments of the series. One of Trek’s most prominent writers at that time, Brannon Braga, had never even seen it.

With Braga — along with producer/writers Rick Berman, Ira-Steven Behr, Ronald D. Moore, Jeri Taylor, and the prolific Michael Piller at the helm, Star Trek was on the television in some form or another continuously for 18 years straight from 1987 to 2005. True, Gene Roddenberry was involved with basic creative inception of The Next Generation, but in the span of almost two decades — and after his death in 1991 — it was other folks running the show(s). As far as the feature films were concerned, Gene Roddenberry had the most creative involvement in the first film, 1979’s Star Trek: The Motion Picture, and even there, his story credit is a point of contention. From 1980 onward, Paramount largely ignored his memos on the movies.

Because all various Star Trek series and films were not the singular vision of one man, writers had plenty of opportunities to experiment with different tones and ideas throughout their series’ runs. Though each show had a different tone (The Next Generation, philosophical; Deep Space Nine, political; Voyager, inventive) even within those contexts writers could find wiggle-room.

One extremely popular episode of The Next Generation called “The Inner Light” was written by an outsider: screenwriter Morgan Gendel. Now a co-executive producer on CW’s The 100, he’ll forever been known for his work on Star Trek, which began with “The Inner Light” and continued with his Die Hard homage episode “Starship Mine.” Gendel told Inverse that he wanted to give Picard the “swagger” that Captain Kirk had in the original series. While his first script, “The Inner Light,” is considered one of Trek’s most tender and loving stories, “Starship Mine,” brought some badass qualities back to Star Trek.

Speaking of classic swashbuckling adventure, for many, Star Trek has survived thanks to the mainstream popularity of the 1982 film Star Trek II: The Wrath of Khan. Not only did director Nicholas Meyer rewrite the screenplay (with no credit) in 12 days to meet a deadline, but he ended up crafting the most enduring Trek tale ever. He established the tradition of outside voices contributing to and forever altering the massive lore of the Trek universe.

“I think including literary elements like Moby Dick in my Star Trek made the fans feel smart,” Nicholas Meyer told Inverse. “Without fans, there’s no nothing. Still, art is not a democracy. It’s not done by committee. When I came onto to Star Trek I couldn’t second-guess 60-million people I’d never met. So I made the assumption that if I like what it that I was doing, that other people might like it as well.”

Obviously, not only was Meyer successful, but countless other Star Trek writers succeeded by doing their own thing, too. “We wanted to do stories that had strength, emotional content, and stories that would live,” Dorothy Fontana said. “I think we succeeded. “

The new showrunner of Star Trek: Discovery, Bryan Fuller, has a background in writing Star Trek: Voyager episodes. With his more contemporary successes on Hannibal and Pushing Daisies, fresh blood and new ideas are invigorating Star Trek again. To be sure, Roddenberry was the founder of this feast, but that doesn’t mean he did all the cooking.