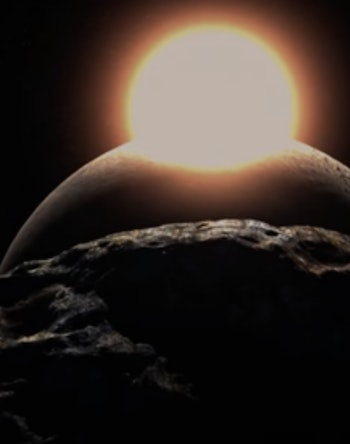 Star Trek Beyond is getting solid reviews and had a pretty decent opening weekend at the box office. Meanwhile, the San Diego Comic-Con preview of the new CBS show Star Trek: Discovery is generating wildly excited buzz for the venerable sci-fi franchise. Clearly, Star Trek is back. But can it become more popular now than ever before?

One of the most enticing narrative components of all Star Treks is the notion of getting “beamed up.” This is Trek’s version of stepping through the looking glass or opening the wardrobe that leads to another world. Very popular television – from Breaking Bad to Game of Thrones – accomplishes the same thing in our heads: a kind of pull to a slight alternate dimension. And when everyone you know is getting pulled to that same dimension (getting beamed up to that same place) we call such a thing “a hit.” Here’s why there’s every reason to believe the forthcoming 2017 TV series, Star Trek: Discovery, will be even more wildly popular than other contemporary peak television like Game of Thrones.

Television has changed drastically over the last two decades. Whereas “episodic” television – mostly (like the original Star Trek) was once the absolute rule of commercial success, the rise of cable dramas (initially, The Sopranos) changed all that. Now, it’s common (and expected) to have big character arcs, consistent continuity, and a writers room pretending to function like the mind of a long-winded novelist. In short, audiences want to be “beamed-up” for longer.

How then, could a new Star Trek survive in this new landscape? Further, how could it (as I’m boldly arguing) not only survive, but thrive and dominate? As television, you could argue that Star Trek is a relic from a version of this medium that no longer exists: each week the Starship Enterprise (or another ship) would roll up on a planet, have an adventure, and generally wrap everything up in 50 minutes. Sure, Star Trek: Deep Space Nine, completely broke the mold with huge story arcs and a multi-season intergalactic war, but even huge fans of the show would admit this does not really represent – at least structurally – how the majority of Star Trek functions.

But maybe that’s all gone. Speaking at Comic Con, Bryan Fuller – the new showrunner of Star Trek: Discovery – said the new show “won’t be episodic.” This isn’t exactly surprising, because everyone suspected the Pushing Daisies and Hannibal maestro to bring his prestige, peak television skills to Star Trek. How could he not? No one would dream of making a big TV show that doesn’t adhere to the medium’s contemporary demand for “episodes” that are really just “chapters.”

If there is a backlash against the current form of the way television is thought about, that backlash hasn’t happened yet, which means a new televised Star Trek was always destined to get the Game of Thrones treatment. And though the proposed structural medium of this new Star Trek is slightly antithetical to its roots, Star Trek: Discovery has two things going for it right out of the gate that no other “new” TV show has ever possessed.

First, the definition of a “cult” following is forever intertwined with the notion of a “Trekkie.” Newsflash: everything once considered “cult” is now the most mainstream of mainstream entertainment. (If I time-traveled to the bookstore I worked at in 1999 and told everyone these fantasy books by George R.R. Martin were going to become the biggest TV show ever, no one would believe me.)

This kind of golden-age television is now pervaded by audiences who are more than audiences, they’re fandoms. Star Trek has the advantage of having a consistent fandom, which has managed to only grow over the last 50 years. Takeaway: the show isn’t out, and the audience is already bigger than you can imagine. Various controversies about the streaming nature of the new show won’t matter: fans of Star Trek have always found a way to watch it, even when it’s been banned in certain cities and countries.

In this way, Star Trek is its own unique animal of media: it’s survived against cancellation, and passed between generations totally dissimilar to any other similar media event. Sure, my late father loved the Beatles and I love the Beatles. But it’s not like there was a “Beatles: The Next Generation.” My father’s generation actually legit grew up with the classic Star Trek and I grew up with the 90’s Star Trek; The Next Generation, Deep Space Nine, Voyager, and Enterprise.

If we add up all the hours of just the Star Trek TV shows, we get about 760 hours. In terms of this hilariously high number of hours of a consistent quality of art, the only TV show universe that comes close to Star Trek is maybe Law & Order. So: Star Trek: Discovery’s audience advantage is it already has a loyal one, and it has another potential new one – a next generation if you will – who is already primed by the zeitgeist to love it.

The second, and most important reason why Star Trek: Discovery will dominate the next wave of big TV is tied directly to something else Fuller said at Comic-Con: “We do have to celebrate a progression of our species because right now we need a little help.”

The new Trek series will be able to adapt to the new structural demands of television because the celebratory, hopeful, optimistic sense of adventure is what defines Star Trek and makes it such a hard pop-culture animal to kill. The political notions of identity area big part of Star Trek’s roots, which correlates with cultural interests of right now in a way perhaps never felt before.

The world is ready for Star Trek to return to TV not just in a geeky way, but a political way, too. Star Trek isn’t a show about people screwing each other over in a mad dash for power and domination. It isn’t about the slow decent into madness of basically good people. Its not a cop show. It’s not about the mob. It’s not about corrupt politicians. Instead, Star Trek has the really insane super-power of being able to potentially be about all of the above and, and still something more and somehow, set in outer space. Star Trek has always been subversive not because it was dark or twisted, but because it very specifically, wasn’t.

And right now, in the television landscape – as it reflects cultural anxieties – that optimistic notion is not only feels urgently necessary, but also bizarrely, brand new.