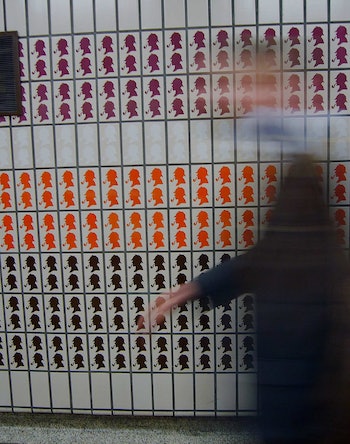 In 1934, journalist Christopher Morley established the Baker Street Irregulars. It was a Sherlock Holmes fan club named for the Dickensian homeless network of stories. It was modest operation overall, but it forever changed the way people engaged with fiction. Almost all of the ceremonies of modern fandom – from conventions and cosplay to fan fiction and even sexual fantasy – originated in post-Prohibition New York, where Sherlock inspired a colony of deductionists.

To understand the significance of the Irregulars, you have to tackle the unprecedented significance of Sherlock Holmes as cultural figure. After the observant junkie “died” in Sir Conan Doyle’s 1893 short story “The Adventure of the Final Problem,” a significant portion of London’s population wore black armbands to mourn the passing of the fictional detective. Holmes stories boosted sales for the Strand Magazine, but the character was not merely a commercial success. Holmes was something closer to a celebrity or a lifestyle. To grieve his loss was a bit eccentric, but because of the crazy popularity of the character, not surprising, either.

“We love the stories of Victorians mourning Holmes’s death,” says Amy Thomas, a member of an organization inspired by the Irregulars, The Baker Street Babes. “Those stories remind us that we’re not so different from fans of the past and connect us to the Sherlockians who came before.”

Formed in 2010 by Kristina Manente as a podcast, The Baker Street Babes are a female Sherlock Holmes fan group. They don’t have a president or a leader, just a lot of deerstalkers. But they, broadly speaking, engage with the Holmesian text in the way Christopher Morely encouraged when he founded the Baker Street Irregulars and held the group’s first event on Holmes’s supposed birthday, seven years after Conan Doyle published the last of the short stories. Morley’s was both an American organization — The Sherlock Holmes Society held sway in Britain — and the real fan organization. It was seen as the center of Conan Doyle-dom in a way Conan Doyle’s grave was not. It took literature and made a social scene from it. Naturally, women were excluded.

“It would perhaps be overly frivolous to suggest that Christopher Morley founded the Baker Street Irregulars in 1934 as an excuse to chat about his favorite Bohemian superhero whilst drinking adult beverages with his mates,” writes noted author and Sherlockian Lynsday Faye in her essay “Inside the Baker Street Irregulars”. “But there you have the gist of it. Its inaugural meeting was a cocktail party held at the Hotel Duane shortly after the repeal of that wickedest of sinister laws, Prohibition.”

So, was the original uber-fan society essentially a bunch of snobby, drunk male literati? Pretty much, but they were also a creative group, unwilling to let Holmes’s creator have him. They staked a claim not only by establishing numbers, but also by engaging in some magical thinking. In his book On Conan Doyle, Michael Dirda asserts that since the formation of the BSI, enthusiasts of the Sherlock Holmes stories have come to together “to play a peculiar, if addictive game, founded on the premise that Sherlock Holmes really lived and Dr. John H. Watson recorded his investigations.”

Leslie Klinger, perhaps the world’s foremost Holmes expert, calls this predilection among fans a “gentle fiction” in his forward to the New Annotated Sherlock Holmes.

One way these early Sherlockians absconded with their hero was by smuggling him into alternative timelines. The number of Sherlock Holmes pastiches has always grown exponentially. And while there is a similar quantity of Harry Potter fan-fiction and Star Trek slash fiction, the non-canonical Holmes arrived first, a subgenre almost 100 years ahead of its Tumblr-driven time. These stories periodical revived the hero. In the mid 1970s for instance, Nicholas Meyer’s pastiche The Seven- Per-Cent Solution brought fans back to 221B.

In the book, Meyer playfully asserts that Holmes’s infamous cocaine addiction could only be treated by Sigmund Freud, providing an intelligent and highly entertaining link between Sherlock Holmes fandom and the psychology of the character himself. Meyer, who is famously the director and writer of Star Trek II: The Wrath of Khan and Star Trek VI: The Undiscovered Country, went so far as to claim publicly that Mr. Spock was a descendent of Sherlock Holmes on his mother’s side. But would Meyer take credit as a fan and a creator for the resurgence of interest in an aging collection of short stories?

“Yes,” he says, laughing. “In my admittedly biased opinion, subscribed to by diverse others, The Seven-Per-Cent Solution was principally responsible for the Holmes Renaissance.”

Meyer obviously didn’t start the Baker Street Irregulars (thought he is a member as of 2004), but he did Conan Doyle’s character a major service by adopting their same strategy.

Since 2010, the fandoms for the Robert Downey Jr. Sherlock Holmes films, the BBC’s Sherlock and CBS’s Elementary have only continued to grow. There are more new Sherlock Holmes books being published every year. In short, the original geeky fandom has reasserted itself as still being one of the biggest fandoms, period.

“Holmes does seem to be more popular and ubiquitous than ever before,” Nicholas Meyer told Inverse, “There are certainly more and varied iterations in circulation than we have fingers and toes.”

The answer may well be Morley. The Irregulars not only kept Sherlock alive, they encouraged fans to make the detective (and Dr. John Watson) their own. Morely couldn’t have anticipated NBA great Kareem Abdul-Jabar authoring a book about Sherlock’s “clever” brother Mycroft, but he did help create the culture that led in that direction. Morley did so with the express understanding that it would be generational.

“The person we most envy this warm summer Sunday,” he wrote not long before his death, “is a young woman of our acquaintance, age 14, who is reading The Hound of the Baskervilles for the first time.”

The popularity of Sherlock Holmes touches more genres than just mystery stories or detective fiction. Through the exploits of Holmes and Watson, seemingly infinite topics are explored. And they have to be. At the core of the Sherlock stories is a deep engagement with the real world. Sherlock’s deductions are invariably based on observations of normative behavior, of quirks, and of social and physical phenomena. Sherlock exists in a state of genius-augment hyper-reality. It is therefore natural that he never ceases to feel relevant. He is a state of awareness, and can sometimes feel almost like a verb. Sherlockians love the grace of applied reason. This is why Nicholas Meyer calls the 56 original short stories and the four novels a “secular bible.”

This is why Sherlock was a natural place for modern fandom to start. If fandom prior to the Irregulars was about appreciation, Morley made it about emulation and participation. People can’t be like Professor Challenger from The Lost World, discovering dinosaurs in South America, or Captain Sharkey from Tales of the High Seas, playing pirate. But they can be like Sherlock. And they’ve been striving to be for over 100 years.

“Whatever attracts you, or interests you about the character, you can find someone who shares that,” Amy Thomas explains. “And that’s a beautiful thing.”