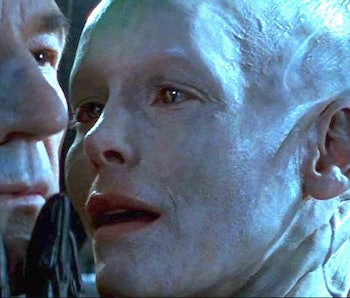 With Episode 6 of Star Trek: Picard, "The Impossible Box," previously separated characters finally cross paths. After a lot of waiting around, Jean-Luc's motley crew launch a daring rescue on the Borg Cube, which means they're on a collision course for a lot of references to old-school canon.

"The Impossible Box" leans heavily on Jean-Luc's traumatic past with the Borg, but the final twist of the episode relies on a very deep, random connection to an episode of Voyager almost everyone has forgotten about. Along the way, Picard manages to reference Deep Space Nine, secret time travel energy, and even the franchise-spanning history with the Romulans. Here's all the Easter eggs and references you might have missed.

Spoilers ahead for Picard, Episode 6, "The Impossible Box."

At the top of the episode, Picard freaks out on Dr. Jurati when she suggests that the former Borg can change. Picard spits, " Change! The Borg? They cooly assimilate entire planets, entire systems, in a matter of hours. They don’t change! They metastasize!”

The scene references Picard's vengeance speech in First Contact, where he said: "They invade our space and we fall back. They assimilate entire worlds and we fall back. Not again. The line must be drawn here! This far, no further!"

Several decades later, Picard isn't out for revenge, but he's still not crazy about the Borg.

When Jean-Luc heads to his holographic study, he asks the computer to search the following terms: "treaty" "reclamation project" and "the Borg." This prompts a deluge of Easter eggs. There's an image of the Enterprise-E in First Contact and an image of Hugh from the TNG episode "I, Borg." The sequence ends with Picard seeing an image of himself as Locutus of Borg in "The Best of Both Worlds."

Throughout the episode, Picard has several flashbacks to his time with the Borg collective. This marks one of the only occasions a Trek TV series incorporates footage from the films. We see footage of Borg drones from First Contact and hear Alice Krige as the Borg Queen. The archival footage of Locutus used in "The Impossible Box" is not from "The Best of Both Worlds," but First Contact again. So, what we're seeing is flashbacks of flashbacks.

When Raffi calls in favor to get diplomatic access for Picard, she's told that "the Romulans are in a 250-year-old bad mood." This number represents the entire time the Federation has even known about the Romulans.

TheTOS episode "Balance of Terror" established that the first Romulan War happened about a hundred years prior. Later, Trek canon would pinpoint this at 2156, roughly around the time the prequel series Enterprise ends. So, in the year 2399, it's been about 243 years since the Federation and the Romulans have been mad at each other.

Hugh tells Picard that "a new name is a new step to a new identity," and mentions he learned that on "the Enterprise." This again references the episode "I, Borg" in which the Enterprise rescued Hugh.

It also kind of references the TNG two-part episode "Descent," where some of the other rogue Borg have names, too. Notably, "Descent Part 2" is the last time we saw Hugh before Picard. At that time, Picard left Hugh in charge of a rogue Borg.

Hugh alludes to the Borg Queen saying, "Only now our Queen is a Romulan." This could be a metaphor. Hugh could be saying the Romulans, in general, control them, so the idea of the Romulans is their "Queen."

On the other hand, it may imply a female Romulan was running the Borg, or what's left of "the Romulan Free State." In theory, if the Romulans had a "queen," there's a slim chance it might be Tasha Yar's half-Romulan/half-human daughter Sela, last seen in TNG episode, "Unification."

Rios tells Raffi, "You owe me two strips of latinum," because she lost a bet. This is a reference to the currency used by people in Deep Space Nine, who operated outside of the boundaries of the Federation.

When Narek tries to kill Soji, he uses a deadly red mist that escapes from a specific box. Though it's not identical, this seems to reference a similar Romulan poison used to kill a bunch of Romulan senators in the opening scene of Nemesis.

Though it's barely audible, when Picard and Hugh go into Soji's room, a voice on the loudspeaker says various areas have been isolated due to "increased chronometric activity." The Borg used these particles to travel through time in First Contact. Is time-travel happening in secret? Or is this just leftover Borg tech acting up?

"The Impossible Box" ends with a crazy twist. Picard and Soji long-distance teleport off the Borg Cube using something called a "spatial projector." Hugh mentions that the Borg got this tech from the "Sikarians."

This references an early Voyager episode called "Prime Factors," where the crew tried to obtain the spatial projection tech to get back to the Alpha Quadrant, but it didn't work out. That episode happened in the year 2371, and the Sikarians had not been assimilated by the Borg at that time. Hugh mentions the tech was "after your time," to Picard. So, at some point after 2371, the Borg assimilated this tech from the Sikarians after their meeting with Voyager.

The spatial projector is also in the "Queen's chamber." This could also explain how there can be multiple versions of the Borg Queen. In First Contact, Picard "killed" the queen, only for her to reappear in several episodes of Voyager, notably, "Dark Frontier," "Unimatrix Zero," and "Endgame." Did she uses the spatial projector to save herself from getting destroyed in "Endgame?"

In Picard, the projector has a range of "40,000 light-years." This matches the Voyager episode "Prime Factors" exactly.

Where are Picard and Soji going? Jean-Luc tells Rios their destination is "Nepenthe." Not only is this the title of the next episode, it also feels like an Easter egg for The Undiscovered Country. In that movie, a place called Rura Penthe is a penal colony, located on a snowy asteroid in Klingon space. Picard pronounces the "penthe" part of "Nepenthe" exactly the same way everyone says "Rura Penthe." This could be a coincidence, but maybe not. Is Picard headed to Klingon space? Do Riker and Troi live on a planet with Worf? We'll have some kind of answer in Episode 7.

Also, for you mythology fans out there, a nepenthe is a drug first referenced in Homer's Odyssey, reputed to help one forget pain, sorrow, and grief.