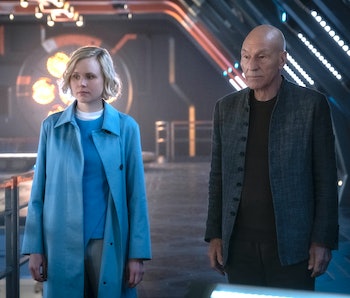 The nice thing about Star Trek: Picard is that the new ensemble is so much fun that we barely have time to miss Worf, Crusher, Riker and the rest of the old gang. In Episode 4, "Absolute Candor," the crew of the Le Sirena pick up a new member and end the episode rescuing a character beloved by Trekkies everywhere. In other words, this latest installment brought the goods.

But amid all the rollicking adventure, is someone hiding a secret? Here's why one character probably isn't what they seem. Speculation and light spoilers for episodes 1-4 of Picard ahead.

There's something off about Alison Pill's character, the friendly and slightly hilarious Dr. Agnes Jurati. Is she telling Picard the truth? Could she secretly be an android, too?

Fans online are already saying she's a spy planted in Picard's crew by the Tal Shiar/Zhat Vash. But that theory may not go far enough. Not only could Jurati be a spy, but she could be an android and not realize it.

Let's look at the evidence in favor of this theory.

1. Jurati was conveniently available right when Picard needed her

In the first episode, Jurati says "I really wish you'd come on my day off." This implies that out of everyone working at the Daystrom she alone held the secret about Bruce Maddox's rogue experiments involving twin androids. In fact, everything about the quest for Bruce Maddox comes directly from Jurati, making Picard believe that Maddox built Dahj and Soji after being inspired by Data's paintings.

But if Picard is the only person who had access to that painting, then how could Maddox have known to make Dahj and Soji based upon it? While it's possible Data took a picture of the painting and sent it to Maddox back in 2369, when the two were pen pals, it still seems a little off. Right now, the thrust of Picard's quest relies on information Jurati has given him.

2. She is aware of things she shouldn't be

In episode 2, Jurati bemoans the death of Dahj saying "The damn Romulans just blew her away." Watch this scene again. Picard's reaction to this comment might be telling. When Jurati says this, Picard just kind of takes a deep breath and nods. But here's the thing: Picard never told Jurati who killed Dahj. So, how the hell does she know it was the Romulans? Does Picard realize she shouldn't know this?

3. We don't see the rest of the talk with Commodore Oh

In episode 3, Jurati is unexpectedly visited by the formidable Commodore Oh. The stern Vulcan security chief says, "I'd like to talk to you about your two recent visits with Admiral Picard." Then Jurati gives a visible GULP.

We don't know how the rest of this conversation went. First of all, if Jurati is a spy, and working with Oh, their conversation could have begun with a kind of faux-familiarity. We saw Oh do this with "Lt. Rizzo," in the second episode — act like everything was normal and then start getting into the nitty-gritty.

That said, Jurati does seem shocked to see Oh, which could support the secret robot theory. Here's another crazy prediction: What if Oh is now dead? What if Jurati realized that Oh was working with the Tal Shiar/Zhat Vash, and then, killed her and ran to warn Picard?

4. She shows up at Picard's house at the exact right moment

Showing up at Picard's vineyard just in time to zap the last Zhat Vash agent in episode 3 seems awfully coincidental. How did Jurati know Picard was even home? Perhaps, like Dahj, she has some kind of rowdy security clearance gained through android powers. Or Commodore Oh could have told her.

Of the two options, it's more fun to think Jurati is a robot— possibly working for the good guys — rather than an evil spy trying to take Picard down. Right?

5. Jurati's timeline at the Daystrom Institute is odd

If we assume Jurati is about the same age as Alison Pill is IRL, she's about 34 in 2399, and 20 in 2385. Now, this is Star Trek, and sometimes people play characters older or younger than they really are. (Patrick Stewart is 79, but in the show, Picard is actually 94!) But, for the sake of argument, let's say Jurati is 34 right now and she was 20, and working at the Daystrom Institute with Maddox in 2385 when the Synths were banned. This is fine. She's a little young to be that far along in her cybernetics career at that point, but this is Star Trek and real young geniuses exist IRL, too.

However, Jurati tells Picard that Maddox "recruited me out of Starfleet," which seems to imply she was either in Starfleet or a cadet around the time she came to work at the Daystrom Institute. Again, for the sake of argument, let's say she was a wiz-kid like Chekhov and was like 17 years old when all of that happened. That means she only worked for about three years at Daystrom with Maddox before the Synths were banned. If we go with this timeline she never would have met Data, because she would have been 14 when he died in 2379.

If we age the character, this becomes less of a murky issue. If Jurati is 40 in 2399, then she was 20 when Data died, and 26 when the Synths were banned. Still Jurati speaks with a familiarity of Data that it seems like she couldn't have.

We're also led to believe she worked with B-4, which means she was really, really young (either like 20 or 16) when the Daystrom Institute got B-4 in 2379. This also assumes that Picard handed B-4 over to Daystrom right after the events of Nemesis.

Bottom line: If Jurati was an android, it wouldn't matter how old she "really" was, and all of her memories of working at the Daystrom institute could be fake.

In Episode 3, Raffi complains about Picard not even running the most basic security check on Jurati. She likes Earl Grey tea, which is maybe to suck up to Picard, but maybe just something she actually likes. Either way, if you put her bio under too much scrutiny, it's not outlandish future episode will reveal a second Jurati, because we know these kinds of Synths are "created in pairs."

Presumably, the primary plot of Picard comes from the show's creators, one of whom is Michael Chabon, a huge Sherlock Holmes fan. He wrote Holmes fanfic when he was a kid, and as an adult published the Sherlock-comes-out-of-retirement-one-last-time novel The Final Solution. Jurati mentions that her dad liked "paper books." This too, could be a subtle clue her memories aren't what they seem.

Star Trek has a lot of classic mystery stuff in its DNA. Historically, Jean-Luc is a detective as much as he's a great leader. If Picard is aware that Jurati isn't telling the truth, he's probably keeping that to himself, and waiting for her to lead him to the next clue.