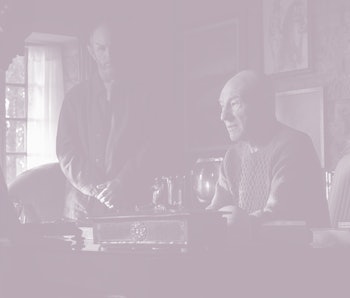 Nobody expects the Tal Shiar! The three weapons of the Romulan Secret police are fear, surprise, and ruthless efficiency. Picard has made these cunning Romulan spies even more mysterious and fanatical. If you thought the references to smug cyberneticist Bruce Maddox in the first episode were some deep Next Generation cuts, you probably weren't expecting the return of Romulans spies so secret they didn't even have a name until Season 6 of TNG. In the second episode of Picard — "Maps and Legends" – the Tal Shiar return with a new origin story and a scarier name: the Zhat Vash.

So how does it all fit into the Star Trek timeline? Here's what the Romulans don't want you to know about the Tal Shiar and the species' history of spycraft. Spoilers ahead.

Even in "Balance of Terror," the phrase "Romulan spies" is spoken aloud, mostly because a random guy thinks Spock could be a Romulan informant because of the whole pointed ears thing. Essentially, this very early episode introduces a terrible enemy that looks exactly like Vulcans.

By the time of their second appearance in TOS, "The Enterprise Incident," spying was completely baked into the show's conception of the species. The episode follows Starfleet's counter-espionage efforts, complete with Kirk going undercover in Romulan disguise as to steal some sweet cloaking tech.

Romulans look nearly identical to Vulcans, because Romulans used to be Vulcans. That is, until they split from their logical brethren to found their own world roughly around the 4th century CE. Though the Tal Shiar are never mentioned in TOS or the first five seasons of TNG, nearly every Romulan-centric episode centers around spying, subterfuge, and trickery.

It wasn't until TNG season 6, episode 14, "The Face of the Enemy" where the phrase "Tal Shiar" was spoken and we found out what they really were: super-secretive Romulan spies. In that episode, Deanna Troi woke up on a Romulan ship, disguised as a Tal Shiar enforcer named "Major Rakal." Here, we learned even "regular" Romulans don't trust the Tal Shiar, whose powers were virtually unchecked, allowing them to order around even warbird commanders with impunity. (This doesn't mean other Romulans had to like it, though.)

Deep Space Nine revealed that many other species had their own versions of the Tal Shiar. The Cardassians have the Obsidian Order, and even Starfleet has the shadowy Section 31. The Tal Shiar collaborated with these top-secret groups throughout the Dominion War in DS9. They were a huge part of "In the Pale Moonlight," and "Inter Arma Enim Silent Leges." Though Voyager was set far from the influence of the Tal Shiar, in the episode "Message In a Bottle," the organization tried to steal an experimental Federation ship called the USS Prometheus.

The Tal Shiar also pops up in a non-canon comic book called Star Trek: Countdown, written in 2009 by Alex Kurtzman and Roberto Orci. This four-part miniseries was presented as part of a backstory for the Star Trek 2009 reboot, and 24th century Romulans freaking out over that supernova Jean-Luc talked about in the Picard premiere. Though no longer considered canon, the comic did feature the Tal Shiar using harvested Borg technology to enhance Nero's ship, which explains why it was freaking badass when it traveled through time and killed Kirk's dad.

Again, this comic book Tal Shiar stuff isn't canon, but Picard has created a way for this detail to still work. In "Maps and Legends," we learn that a version of the Tal Shiar (the Zhat Vash) is operating on Earth and they hate artificial intelligence. The episode also shows a bunch of Romulans harvesting Borg technology, and it seems like they've been doing it for a while.

In Picard, there's a lot to suggest that Jean-Luc's new Romulan housekeepers and winery co-workers — Laris and Zhaban — are former Tal Shiar. A very recent comic called Star Trek: Picard: Countdown straight-up confirms this. (It's co-written by Picard co-creator Kirsten Beyer.) In this comic book, we learn all about Jean-Luc's early efforts to evacuate the Romulan Empire. In the first issue, he meets a younger Laris and Zhaban, who explain they were forced to leave the Tal Shiar because they fell in love. Jean-Luc sticks up for them in this comic series, which is why, after the destruction of the Romulan Star Empire, they decide to stick with him.

This why Laris is such a good detective in "Maps and Legends," and why she knows about the rumors of the Zhat Vash. She and Zhaban were basically badass Romulan secret agents before settling down to make wine with Picard. This means, that in some ways, he's never had better or more competent protection.

As far as the new mysteries of the Zhat Vash, which Laris describes as a "much older cabal," all this stuff is brand new to Star Trek canon. The reasons why the Zhat Vash — and by extension, the Tal Shiar — hate A.I. so much are yet to be revealed.