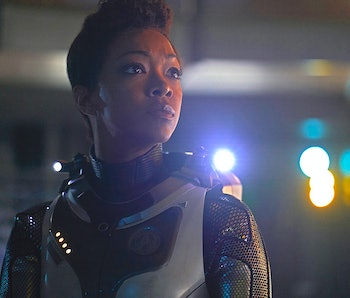 Star Trek: Discovery is about beginnings. In the first season, we saw the Federation take the first steps towards peace with longstanding enemies. The second season, saw Captain Pike embark on a journey he'll never escape from. Season 3 will kick off another totally new story. Each season of Discovery has begun in new and unexpected territory for fans. Here's how Discovery Season 3 compares to the first two, and why it might be a welcoming entry point for franchise newcomers.

Season 1 of Discovery was a wild experiment — In 2017, before Discovery aired, it was nearly impossible to get a sense of what the show would be like. CBS kept its cards close to their Starfleet uniforms. We had no idea that Michelle Yeoh's Captain Georgiou would die in the second episode, or that the titular USS Discovery wouldn't appear until the third episode.

In Discovery Season 1, two characters had secret identities — Ash Tyler and Captain Lorca — and the other characters barely liked each other. Burnham was distrusted by nearly everyone who wasn't her roommate Tilly. Their mission wasn't so much "boldly going," but more like barely holding things together.

Just to be clear: I think Discovery Season 1 is excellent. It's actually edgier and stranger than anything Star Trek has done since. Even though it was only three years ago, I'm already a little nostalgic for the months leading up to it because the speculation was so much fun. Fans knew Discovery took place about 10 years before TOS, had something to do with the Klingons, and focused on Spock's secret step-sister, a human named Michael Burnham.

But that was pretty much it. We didn't really know what the show was going to be about or who the "real" captain was. If you focus on just those two facts: Not knowing what the season is about, and wondering who the Captain is, Season 3 is in the exact same boat: The USS Discovery doesn't have an official captain right now. Other than the far-future setting of the late 32nd century, we don't really know what the ship and crew will be doing. The best guess is: trying to figure out what happened to the Federation. But, we don't actually know.

Season 2 of Discovery was a jolt of nostalgia — The Season 1 finale introduced the USS Enterprise, and Season 2 revealed the people inside of it. Captain Christopher Pike (Kirk's predecessor) became a central character alongside Michael Burnham.

Tonally, Discovery Season 2 is nearly the exact opposite of Season 1. While the debut season focused on secrets and war, Season 2 was more about rescuing people and saving the future. There were big questions ahead of Season 2: How was the show going to handle a younger Spock? Would the new Spock (played by Ethan Peck) be accepted by fans? What about Pike? Fans knew that Pike couldn't die, but they also knew he couldn't remain, Captain of the Discovery, because, at some point, he would need to go back to the Enterprise.

By bringing on Pike and Spock, the series actively strove to reconcile itself with the existing Trek canon. In 2019, the star of the series, Sonequa Martin-Green, told Syfy Wire that attacking the canon issues gave her "a sense of comfort" and that it established the characters within the larger context of Star Trek.

"I knew it would be encouraging for people to see that constant reminder of where we stand in the canon. Especially because of the way these characters were weaved in," she explained. "It wasn't just fan service."

Season 3 is basically a new series — For the first time, in the entire run of Discovery, some of the extra-fictional canonical issues about the series will be absent. Not only will Discovery reveal what happens next for the characters, it will also explain its own context. Some have said that the first season of Discovery has two pilot episodes: the actual first episode, "The Vulcan Hello," and then, the third episode, "Context Is For Kings," when Burnham actually arrives on the USS Discovery. By that logic, the Season 3 premiere may be like a fourth pilot episode. In all the previous "pilot" episodes the narrative goal was to establish who the characters are. But now, that's not necessary.

Even though Discovery Season 1 and Season 2 were widely different in tone, they had one thing in common: the status quo of the Star Trek universe didn't need to be explained. Because both these seasons were prequels, they were, in a sense, period pieces set in the history of Star Trek. Establishing the rules of that fictional future wasn't really needed, meaning, the debut episodes were all about new characters.

This is why Season 3 will be so radically different. We know the characters. We know the ship. We don't know anything else. 930 years into the future is a huge jump. The context of Star Trek will have to be entirely redefined. It's an exciting prospect, because it's something Star Trek has never tried. For the first time since The Next Generation took the franchise a century into its own future, Discovery is now speculating on that same future, nine centuries later. What it looks like, is still, anybody's guess.