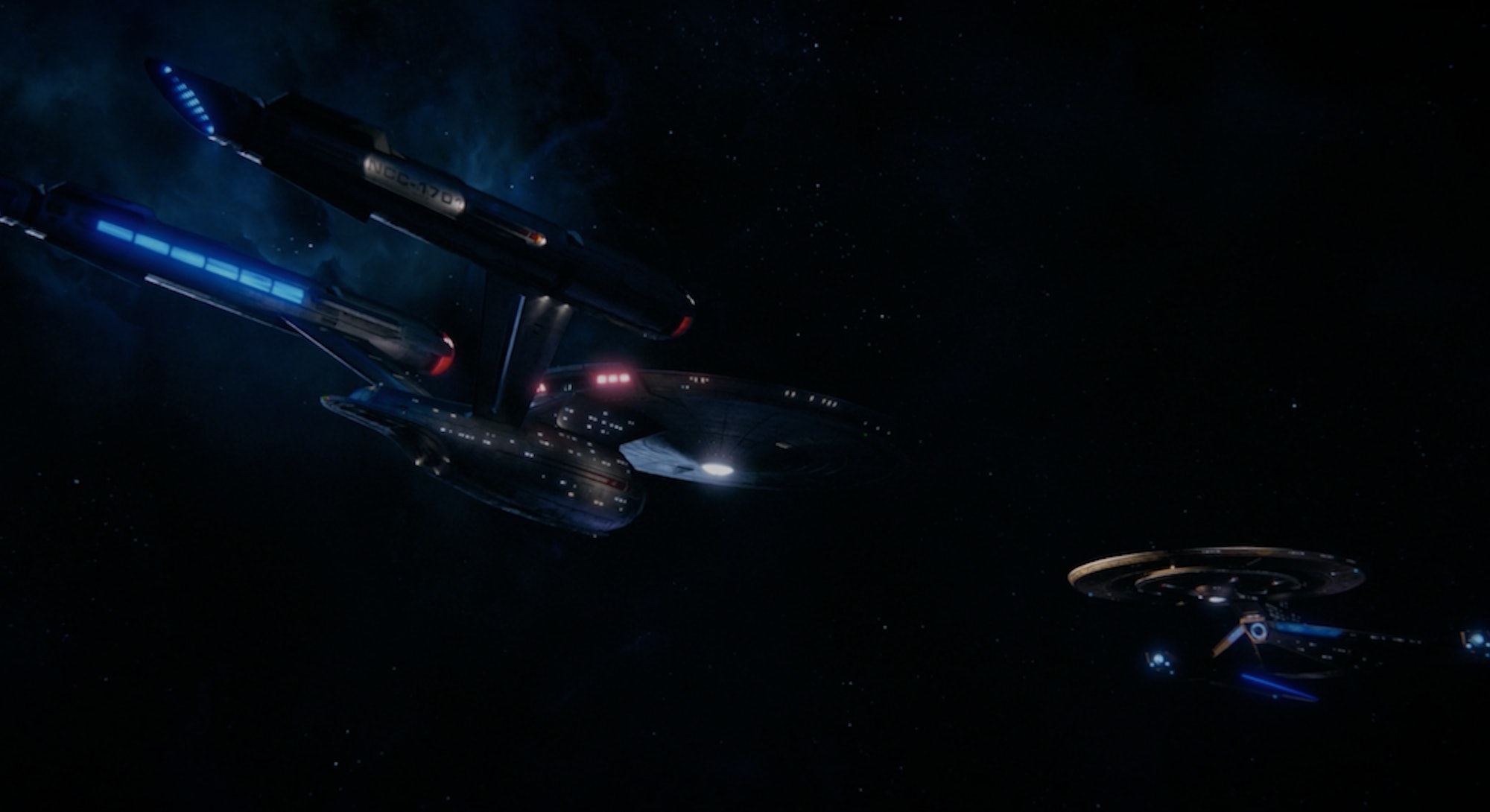 The starship USS Enterprise NCC-1701 is back. Star Trek: Discovery has just aired its first season finale on Sunday, and the final moments will shock Trekkies across the universe as the classic Enterprise warps in for a rendezvous with the USS Discovery. But because the Enterprise has been redesigned again, does that mean Discovery violates canon? Will fans freak out? The showrunners of Star Trek: Discovery — Aaron Harberts and Gretchen J. Berg —say everyone can relax. Not only did they think about this a lot, they also knew they had to bring back the original Enterprise.

Since early photos of the new Discovery uniforms and spaceship aesthetics emerged in the summer of 2017, fans have been divided. Some fans argue, that because Discovery takes place roughly ten years before the classic show, in the year 2256, everything should look like the 1960s concept of the future. One fan on Reddit dislikes the uniforms and ship designs in Discovery so much, calling them “An OCD nightmare…GAH!” But, these angered fans are clearly still watching Discovery and now that the Enterprise has appeared, the latest Trek is actively extending an olive branch to fans concerned about old-school canon.

“It’s been the elephant in the room,” Discovery co-showrunner Gretchen J. Berg tells Inverse. “We are in this timeline. I think all the viewers were wondering and we were asking ourselves, and it had to be addressed.” Aaron Harberts agrees, pointing out that the inevitability of Discovery running into the established events of Trek’s future-history. “There were so many questions as to how we were going to reconcile Discovery with canon,” he explains. “And we wanted to rip that band-aid off and have our crew encounter the Enterprise. We wanted to put the fans minds’ at ease that Discovery truly does have a place in this timeline.”

Fan discussions about the nitty-gritty aspects of the starships of Star Trek goes all the way back to the Seventies. When Inverse spoke to former Star Trek: The Next Generation executive producer Ronald D. Moore shortly before the launch of Discovery, he said this kind of thing has been going on for a long time. “I remember when the Star Fleet technical manual came out in the Seventies, and the blueprints of the Enterprise were in it. And people picked them apart,” Moore said. “They were like ‘Deck Five on the Enterprise did not have this in it. There’s a bowling alley and there should not have been a bowling alley.’”

The new USS Enterprise on Discovery is in theory, the old USS Enterprise from the old Seventies technical manuals Moore remembers. And though its new design doesn’t alter the old ship as much as perhaps the J.J. Abrams films did, it still has some new flourishes. The designs sits somewhere between the classic feature film version of the Enterprise, the Sixties ship, and the blue-ish aesthetic of Discovery has established. But Harberts isn’t too worried if fans do or don’t like the new Enterprise.

“One thing I have learned is that I haven’t seen Star Trek fans be able to agree on anything. Some Star Trek fans are going to love the new design and some are going to hate it,” Harberts said. “But what people need to realize is that we’ve got visual artists, production designers, and our visual effects people, that are fans on staff. I just hope peoples’ ire or emotions don’t get in the way of enjoying the show. You have to embrace where you’re at now.”

No matter how radically different the new Enterprise, or anything else on Discovery might seem, Harberts and Berg have history on their side. “There are crazy turns in Star Trek design history,” Trek historian Larry Nemecek told Inverse in September 2017. “Some people say the original series is just the children’s version of that era.”

With Discovery, Star Trek is certainly not a children’s version of anything that came before it, even if its timeline is butting-up against the events of a science fiction TV show that is over fifty years old. And though the original series Star Trek theme music plays over the end credits for the Discovery season finale, Berg and Harberts are adamant that this show isn’t a nostalgia trip. “What I want our audiences to remember is that our show is Star Trek…Discovery.” Harberts says with emphasis on the titular ship. “And the lens through which we tell our stories is always going to be Michael Burnham and the Discovery crew.”

Berg is excited about the Enterprise and what it means for season 2 of Star Trek: Discovery. And she hopes fans see the return of the Enterprise as part a blend of the old an new. “Such love and care is always paid to canon,” she explains. “And that can make us nervous, but it’s also a great privilege to be part of this.”

Hopefully, fans will agree, and judge the new starship Enterprise by the way it boldly goes, just as much as the way it looks.

Star Trek: Discovery’s first season is streaming in its entirety on CBS-All Access. The series has been renewed for season 2, but no release date has been announced yet.