“I’m all about good energy” 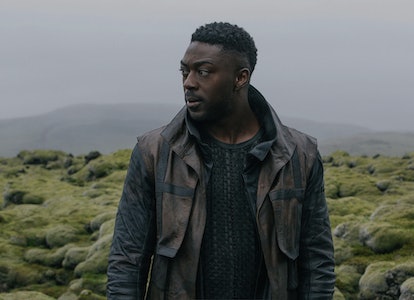 Who would win in a fight between Han Solo and Captain Kirk? Star Trek: Discovery may have solved this long-running sci-fi fan debate with a third option: Cleveland "Book" Booker could probably take them both.

In Season 3 of Discovery, actor David Ajala plays Book with the kind of confidence that seems to blend the sensibilities of both Trek and Wars. He's a little bit Lando Calrissian craftiness, but then again, he's got a streak of Jean-Luc Picard's altruism in him, too. But Ajala tells Inverse the character is also brand new.

"He has unorthodox methods of achieving positive, humanities results," Ajala says of the Han Solo comparison. "But how Cleavland Booker is slightly different is his whole mission being altruistic and serving a purpose bigger than himself."

Genre viewers of all different fandoms were already used to seeing David Ajala before he arrived in Star Trek: Discovery. From his short — but memorable — role in The Dark Knight to Manchester Black on the CW's Supergirl to his turn as an alien villain in Doctor Who, Ajala has become a sci-fi/fantasy man-about-town. But in Discovery Season 3, it's possible all that talent and fandom energy is being channeled into a new kind of interstellar hero.

Starting with the Season 3 premiere, Ajala's space-smuggler, Book, has infused new life and energy into Discovery. He's the first person to meet Michael Burnham after she falls out of a wormhole, and this gives the two characters something of a Doctor Who romance. But Burnham isn't going anywhere, and even though Book is a rogue space smuggler, it seems like he's around for the long-haul, too.

“Cleveland Booker could collaborate more with the Federation and Starfleet.”

"After Episode 6, mentally, Cleveland Booker is in a different place than when we last saw him in Episode 3," Ajala says. "I think it’s more of a viable option that Cleveland Booker could collaborate more with the Federation and Starfleet."

Historically, Star Trek hasn't had a lot of long-running space smugglers who end-up sticking around. Star Trek: Picard's Chris Rios (Santiago Cabrera) may have paved the way for Book, but Rios was, at his core, a former Starfleet officer. In contrast, when we meet Book, he initially regards Starfleet and the Federation as something of a joke. This puts him closer to Han Solo than any Trek character before. Not to mention he has a super-slick spaceship and a furry co-pilot in the form of the giant cat named "Grudge."

But, will Book be around forever? Is he really the Han Solo of Trek? Here's what David Ajala, the man himself, had to say about all that.

How does it feel to be the Lando Calrissian, or the Han Solo, of Star Trek?

That is wild! [Laughs.] I mean, to be included in or amongst those names is super-cool, because those characters have been part of popular culture and loved for many years, you know. I’m very humbled. It’s so much fun and it really warms my heart to know people are really embracing and enjoying this character.

Did you get a chance to contribute to the relationship between Book and Michael Burnham in the scripts?

Truth be told, I can’t take too much credit for that. Michelle Paradise and Alex Kurtzman — the co-showrunners for Star Trek: Discovery Season 3 — when we first spoke about the character, they pitched a few ideas, but there was a lot of room for improvisation and collaboration and discovery — excuse the pun. And as much as that was nerve-wracking, it was also very flattering, because it meant there was a world of possibilities and opportunities to develop the relationship with Michael Burnham. Sonequa Martin-Green, being the wonderful lady she is and a talented actress, just developed the synergy that we have and I think it’s because of our commitment to the work and telling these stories. I’m very grateful to be collaborating with her.

You have a long history with “genre” projects: Doctor Who, Jupiter Ascending. You were in a Fast and a Furious movie —

— [Laughs]. Yeah. Thanks for remembering that.

“Dark Knight is the one thing that people remember me from.”

Did any of this prepare you for joining Star Trek?

Lately, I’ve become more and more aware that I’ve been a part of some pretty successful franchises that have been celebrated around the world. But I’ve always been driven by the character and that’s what leads me into the project.

As far as it goes for being prepared for what it was like to be on Star Trek, I’d say the nearest thing is a cross between working on The Dark Knight and then, Supergirl. I mean, we filmed Christopher Nolan’s The Dark Knight many years ago, and I was briefly in it, but it was a very memorable scene.

Of all the scenes I’ve done as an actor, that’s the one thing, top of the list that I get recognized for everywhere. This isn’t to say that everyone recognizes me when they see me, but if we’re talking about getting recognized, The Dark Knight is the one thing that people remember me from.

With Supergirl, I had no idea how huge the fanbase was. I really wanted to work on it because it was a really cool character. After experiencing the Supergirl fanbase, I think that definitely helped me join Star Trek.

Every Star Trek has its character with swagger, and I think your character kind of brings that —

— But going back to the Han Solo comparisons, how is Book different from the rogue characters we’ve seen?

He’s similar in the sense that he has unorthodox methods of achieving positive, humanities results. He also has a good moral compass. That makes him similar to those characters you mentioned.

But how Cleavland Booker is slightly different is his whole mission being altruistic and serving a purpose bigger than himself. This is because of a very personal thing that happened in his life — which will be revealed later in the series — where he was ostracized from his family. He lost his sense of purpose, which was a really scary place for him to be.

After Burnham put Book in that Starfleet uniform in Episode 3, do you think that Book could ever join Starfleet?

Yeah, potentially! After Episode 6, mentally, Cleveland Booker is in a different place than when we last saw him in Episode 3. I think it’s more of a viable option that Cleveland Booker could collaborate more with the Federation and Starfleet. In what capacity? That is yet to be discovered and figured out.

“There’s a lot of sunshine from the Star Trek family.”

Star Trek has a way of changing an actor’s career. Are you ready for that?

I guess I have to embrace it. Look, I’m all about good energy. If that’s how the fans respond, with that energy and that vibe, then I’m here for it. And even if they don’t, and they feel negative or whatever, they are justified in their opinion. But, I’ll tell you what, there’s a lot of sunshine from the Star Trek family.