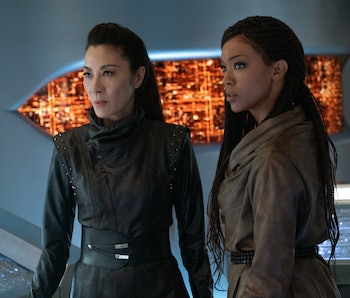 When Jean-Luc Picard set the self-destruct sequence for the USS Enterprise NCC-1701-E in First Contact, Beverly Crusher said "think they'll build another one?" Picard responded optimistically: "Plenty of letters left in the alphabet."

This quip referenced the long-running rule about Federation starships in Trek lore: When one ship got blown-up, it was totally acceptable to build a new one with the exact same registry number, as long as you added a new letter onto that number. Patient zero of the getting-a-new-letter rule was the USS Enterprise NCC-1701-A, in Star Trek IV: The Voyage Home. The Enterprise preceding 1701-A was just "NCC-1701." Or as Scotty said on TNG: "No bloody, A, B, C, or D!"

But now, the USS Discovery NCC-1031 has suddenly been given a new letter, and (as far as we know) it hasn't been destroyed. Here's how this cosmetic change to the titular ship on Discovery shakes-up a decades-long tradition in Star Trek canon.

Spoilers ahead for Star Trek: Discovery Season 3 through Episode 6, "Scavengers."

In the very first scene of the episode "Scavengers," a Captain's Log-style voiceover from Saru tells us that in the roughly three-weeks in-between "Die Trying," and now, Discovery has undergone a rigorous upgrade and refit. Physically, this means the ship looks a little different (new paint job!) and also has detached warp nacelles. (Which we haven't seen in flight yet.)

But, for longtime Trekkies, the most jarring thing about the DISCO-upgrade is the fact that the ship's registry number — previously NCC-1031 — now reads "NCC-1031-A." Yep. The USS Discovery got a new letter, even though this ship is not a new ship, but instead an upgraded version of the old ship.

To put this in perspective, this would be like if the classic USS Enterprise NCC-1701 had become NCC-1701-A after its facelift in The Motion Picture. Prior to now, an upgrade did not necessitate a new registry letter in Starfleet. Only the total destruction of the previous version of the ship meant you could get a new letter. Generally speaking, this often meant the new version of a ship would also be a totally different "class" of starship, too. For example, the USS Enterprise-D was a Galaxy-Class ship, but the USS Enterprise-E was a Sovereign-Class ship. That said, both the TOS Enterprise and the 1701-A Enterprise were Constitution-class ships, even though the second one had a new letter, and the first one didn't.

So what does this mean more broadly?

So, it seems reasonable and possible that one of the reasons we're seeing a new letter on a ship is that Starfleet is decommissioning ships less than they used to. The fact that they bothered to upgrade Discovery at all is telling. In the old days, they probably would have just taken the Spore Drive out, and stripped-down the old ship for parts. But, in the post-Burn galaxy, Starfleet probably needs to hang onto whatever ships it has. Hence, upgrading Discovery, and treating it as though it was a "new ship."

In "Die Trying," Vance reminded Saru and Burnham that time travel is totally illegal in the 32nd Century, meaning, that their very presence at Starfleet is "by definition, a crime." This small detail alone could account for the new letter. If anyone has historical records of the OG USS Discovery NCC-1031, then having that ship running around in the "present" could be a liability for Starfleet, from a legal perspective. (Though, who could possibly be enforcing time travel laws right now?)

Either way, it seems possible that treating the Discovery as a new ship helps to clean-up Starfleet's records. If anyone asks, they built the USS Discovery-A THIS year, and that other Discovery was destroyed in 2258. Basically, the new designation helps Starfleet keep its story straight about where they got this ship, just in case anyone asks.

There are other sideways precedents

Although we think of the USS Enterprise NCC-1701 as the "first" Enterprise, it was, in fact, predated chronologically by the NX-01 Enterprise from the prequel series of the same name.

In Star Trek Beyond, Scotty actually explains how this process fundamentally altered Starfleet, even though he doesn't get into the weeds about why the Franklin was called the USS Franklin and not the SS Franklin. (TLDR: That "USS" designation was retroactive.)

When reached for comment about the USS Voyager-J in "Die Trying," CBS told Inverse: "The U.S.S. Voyager you see is a 32nd-century Intrepid-class starship (like the original)."

Basically, this neither confirms nor denies the theory outright. On the one hand, the Voyager-J might be the same Voyager, and like we just saw with Discovery, kept getting new letters over the years. Or, it's a newer ship, and looks similar to the old Voyager, because it's a "32nd-century Intrepid-class starship."

Will there be an episode of Discovery, in which people at Starfleet just sit around and directly explain all the rules of starship naming and numbering? Seems like a job for Lower Decks, which honestly, for some fans, would be amazing.