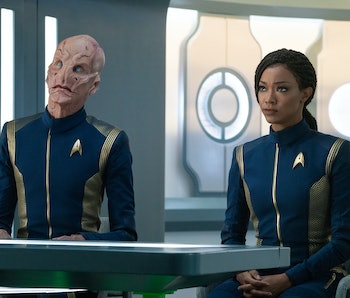 How did that get there? One of the most famous and beloved starships in Star Trek history has suddenly returned.

For a hot minute, at the start of Star Trek: Discovery's latest episode, "Die Trying," the crew glimpses the USS Voyager NCC-74656-J at Starfleet headquarters. Is this the 11th Federation starship to carry the name? Or is this the same starship commanded by Captain Janeway back in the 2370s? If it is the same ship, does that mean Janeway's USS Voyager has undergone seven centuries of upgrades? Here's what the USS Voyager-J might mean for Star Trek's canon.

After hitting up Earth and realizing Starfleet and the Federation no longer lived there, the crew of the USS Discovery obtained an algorithm from Adira Tal, based on the memories of their former Trill host, the Starfleet Admiral Senna Tal. In Episode 4, "Forget Me Not," Adira gave this special code to Burnham and by the start of Episode 5, the ship is sailing into Starfleet Headquarters. Once there, the crew witnesses what 930 years of Starfleet upgrades looks like for new starships. Tilly notes that some of the ships don't even have traditional hulls, and are instead, comprised entirely of "holographic containment walls." Meanwhile, Lt. Owosekun notices there appears to be a new version of the "Constitution" which references the Constitution-Class USS Enterprise which was contemporaneous with the USS Discovery back in their original timeframe in 2257.

But the big news is easily spotting the USS Voyager. Like the first Voyager launched in 2371, this Voyager has the registry NCC-74656, but with a "J" at the end of it. Tilly guesses that this means there have been "10 generations of evolution" to this ship, but Owosekun says it's "11." So, what does this mean? Is this the 11th Federation Starship to have the name "Voyager'" or is this the same ship that Janeway commanded in the 2370s, but with 11 generations of upgrades? Let's dig-in.

The first time a letter was affixed to the registry of a Starfleet ship with the same name as another Starfleet ship was when Kirk and the crew were given the USS Enterprise NCC-1701-A in The Voyage Home. Because the first Enterprise NCC-1701 was destroyed in The Search For Spock, the 1701-A ship was a brand-new ship, even though it was the same upgraded Constitution-class Enterprise from The Motion Picture. This tradition was repeated in Star Trek Beyond, in the alternate Kelvin Universe: After that NCC-1701 Enterprise was destroyed, the Kelvin crew got a new Enterprise, built from scratch that had the 1701-A number.

Starfleet has changed the names and numbers of ships before

Thinking about past Starfleet traditions makes this Voyager-J thing seem like a pretty cut and dried case, but it might not be. And that's because Starfleet has outright changed the registry numbers and names of starships before. Although the USS Excelsior was originally given the number NX-2000 in The Search For Spock, by the time of The Undiscovered Country, that number had been changed to the more traditional NCC-2000. (The off-screen reason was simple: The Excelsior no longer had an experimental transwarp drive, and thus, was no longer an experimental ship, so, they ditched the "x.")

In Deep Space Nine, after the USS Defiant was destroyed in the episode "The Changing Face of Evil," the starship USS Sao Paulo replaced the Defiant in "The Dogs Of War," and was renamed to Defiant. This also meant the "new" Defiant got the old registry number of the previous one, switching from NCC-75633 to NX-74205. Some apocryphal sources suggest that the Enterprise-A was called the Ti-Ho before being renamed and renumbered.

Owo and Tilly's comments point to one conclusion

Outside of what we know about Starfleet's policies in other parts of the canon, based on the dialogue and visual evidence, it really seems like we're meant to think this is the same ship from Star Trek: Voyager, but with a ton of upgrades. For one thing, Owo and Tilly don't say "this must be the 11th ship that has been named Voyager," they say "generations of evolution." We know that in the 32nd-century context of Discovery "generational ships," are certainly something that seems to be more common than not. Grey Tal and Adira were on a generational ship before a huge accident. Plus, the original Voyager was 100 percent intact at the end of the run of that series, and one of Discovery's Executive producers is Kirsten Beyer, the author of several novels about Voyager set after the series ended.

Finally, Owo says "We'll have to hear those stories" which strongly suggests that the stories were connected to the same ship, and not several ships that had the same name.

What does this mean for starship canon going forward?

If the USS Voyager-J is the same Voyager we saw in the 24th Century, then potentially, other Starfleet ships from that era might still be around but just rocking a new letter at the end of the registry number. Meaning, if we get a USS Enterprise NCC-1701-Z in Discovery Season 3, it could – conceivably — be the same ship Picard commanded against the Borg in First Contact. Right now, Trek canon has created a ton of possibilities for ships of the Federation to act as living links to the long, and beloved past of the entire franchise.