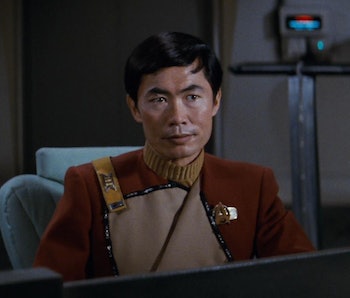 The crew of Discovery hits a serious rough patch early on in Season 3. They're permanently disconnected from everything they've ever known in the 23rd century, and don't have anyone to talk to. PTSD in space is something the Trek franchise tends to glaze over, but Discovery just changed that.

In Season 3, episode 4, "Forget Me Not," Keyla Detmer (Emily Coutts) loses her cool with her shipmates, and the scene touches on something the Star Trek canon has only ever hinted at — the people flying these ships are often treated like crap.

After learning the warp engines are fixed in in Wrath of Khan, Admiral Kirk says "Bless you, Scotty! Go Sulu!" This line is a total microcosm for a perpetual bias in most Trek narratives: The engineer making the ship's engines work has a hard job, but the pilot just kind of presses a button. Sure, Kirk, Picard, Sisko, Janeway, and Archer tended to push their chief engineers to the limit, but we expect the helmsperson to be a steady rock.

Our original Trek flight controller was Sulu (George Takei) who was mostly left to his facial expressions to convey any stress about piloting the USS Enterprise. In The Final Frontier, when Kirk casually orders Sulu to pilot a shuttlecraft into the shuttle bay at top speed, Sulu reminds everyone that "actually, it's my first attempt." This scene is mostly played for laughs, but the larger point remains; Kirk (and the audience) just kind of expect the helmsperson of their respective starships not to mess-up or get stressed out. But what if they did?

Since the start of Discovery Season 3, the show has been teasing out that exact question. After taking a hard fall in Episode 2, "Far From Home,"Lt. Detmer has been noticeably shaken. In Episode 4, she snaps. After Stamets (Anthony Rapp) takes some credit for maintaining the Spore Drive, Detmer says, "I"m the one who flies this monster!"

She's right. But the most interesting thing about this is that Star Trek has never really talked about this before. Yes, some pilots make errors on Trek, but the main characters who we see episode after episode and in all the films never talk about how stressful it is to fly a giant hunk of metal through space. Whether its Sulu or Tom Paris, or Lt. Valeris in The Undiscovered Country, the pilots of Trek's biggest (literally, biggest) spaceships are usually taken for granted.

When Sulu is promoted to Captain in Star Trek VI, even he yells at his helmsman, some poor dude who says "She'll fly apart, sir!" Sulu, taking a cue from Kirk bellows, "Well fly her apart!"

In Discovery, when Detmer admits to Dr. Culber that she's having a rough time with the responsibility she jokes, that pilots are supposed to be "macho," a moment that outright acknowledges the stereotype of the hot-shot pilot that pervades not only the Trek canon but a ton of other sci-fi narratives, too. For some reason, in a lot of sci-fi narratives, our focus tends to stay with the characters in charge, and not always with the people pushing the buttons. Or, if we are worried about pilots — like say, in Star Wars — we rarely check-in on the ones who made mistakes. Though a few Star Wars novels and comics touched on this, it's not like we really linger on Wedge's guilt over pulling out of the Death Star Trench, or Luke's concerns about his skills after crash-landing two ships in The Empire Strikes Back.

Star Trek has always explored psychological realism in greater depth than Star Wars, but until now, both franchises have had the same attitude toward star pilots, placing them in two broad categories — awesome or dead.

Thankfully, is Discovery breaking down this trope with Keyla Detmer. Yes, flying a cool spaceship makes you a badass. It doesn't mean it's not the most stressful job in the galaxy.