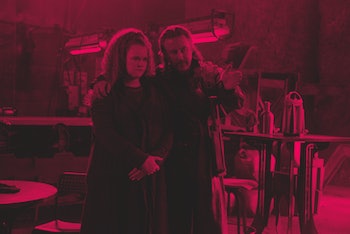 The 32nd-century setting of Star Trek: Discovery Season 3 is entirely brand new for the Trek timeline, right? Well, that's mostly true. But other than some backstory from the prequel series Enterprise, there is one huge rosetta stone for Discovery Season 3 that's actually been around since 2018. The Short Treks episode "Calypso" offers a glimpse of the distant future of the Trek galaxy. Discovery Season 3 has confirmed at least one aspect of that future will definitely come to pass.

Here's how Picard showrunner Michael Chabon's Short Treks episode "Calypso" was referenced on Discovery's "Far From Home," and what it might mean for Trek canon.

In the Season 2 Discovery finale, Michael Burnham led the USS Discovery 930 years into the future. In the Season 3 premiere, we learned that year was actually 3188, and episode 2 situates the crew closer to 3189. Turns out, Burnham has been waiting for the crew for a full year.

We've seen a version of the far-future of Trek in "Calypso," where a man named Craft (Aldis Hodge) wakes up on a version of the Discovery adrift for 1,000 years. It's not clear how close this setting is to the 3180s of Discovery Season 3. Some Trekkie chronologists (like Memory Alpha) place "Calypso" after Season 3.

Meanwhile, director Olatunde Osunsanmi told Inverse, "It's not a one-for-one. What we see in 'Calypso' isn't going to necessarily happen throughout the rest of the season."

A key term used in "Calypso" has already popped up in Discovery Season 3: A pejorative slang-term for the Federation. The villainous Zareh calls Saru a "V’draysh captain." Saru was unfamiliar with the term, and Zareh claimed that everyone should basically understand "pidgin," implying the dialect he and his lackeys spoke in wasn't a new language, but instead, a shortening and transmogrification of an older language.

"V'draysh" is a syncope of the word "Federation," Chabon confirmed this back in 2018.

Well before Picard had been completed and written, Chabon's first Trek script was "Calypso." In it, Craft mentions that the people of Alcor IV (his home planet) have been at war with the "V'draysh" for at least ten years. Craft seemed unaware that the Discovery, and its sentient computer Zora, was a Federation ship, but that's not super-surprising considering how old the Discovery is at this point.

This gets interesting when you consider how fractured and beaten-down the Federation seems to be in the Season 3 premiere of Discovery. When Michael meets Aditya Sahil, the closest Starfleet rep in her sector, he's clearly incapable of waging war against anyone. So, if the V'draysh (Federation) war with Alcor IV is still yet to happen, it seems like it may be waged probably a totally different faction of the Federation.

In "Far From Home," Zareh is totally hip to the idea that the Discovery is a Starfleet ship that has time traveled. He's also encountered Federation starships before because he drops that term "V'draysh captain." On top of all of that, Zareh also says "the Burn was the best thing that happened to me," in reference to the widespread dilithium failure that hamstrung interstellar travel galaxy-wide.

In the Season 3 premiere, Book mentions the Burn happened at least a century prior. How could Zareh have remembered the Burn? Was it the best thing that happened to his family, who were also merciless pirates?

This comment, combined with Zareh's knowledge of time travel and the "V'draysh" line, suggests he's hiding more than a history of piracy. If Zareh has first-hand knowledge of the Burn, that could mean he was or is a time traveler, too. Either way, all of these question marks about the future of the Federation probably indicate that when it comes to timeline twists, Discovery Season 3 is just getting started.