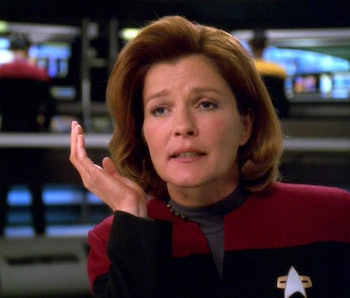 Get ready to look for coffee in the nearest nebula – Captain Kathryn Janeway is back! At NYCC 2020, CBS and Nickelodeon revealed Kate Mulgrew will reprise her role as the iconic Voyager captain in the new animated series for kids, Star Trek: Prodigy.

Like all the new Trek projects, Prodigy will be woven into the complex tapestry of the show's canon. So, relative to Captain Janeway, how does that shake out? Does this series happen before Voyager? After? During? Does the return of Janeway in Prodigy mean that a larger Trek MCU is forming?

Here's what it all could mean for the Trek canon as a whole.

During NYCC 2020, CBS and Nickelodeon shocked Trekkies by revealing that Captain Janeway will play a major role in the kids' series Star Trek: Prodigy. Here's how Kate Mulgrew put it in the official press release.

"I have invested every scintilla of my being in Captain Janeway, and I can’t wait to endow her with nuance that I never did before in Star Trek: Prodigy. How thrilling to be able to introduce to these young minds an idea that has elevated the world for decades. To be at the helm again is going to be deeply gratifying in a new way for me.”

But how will this work? In Star Trek: Nemesis, Janeway was promoted to Admiral Janeway by the year 2379. So, if Captain Janeway when does Prodigy take place? Here are the options.

Prodigy happens during the events of Voyager

If Janeway is still at the rank of Captain, then perhaps, this series somehow happens during the events of Star Trek: Voyager. If that's true, then there will have to be some pretty interesting timeline gymnastics.

This option seems unlikely, if only because series producer Alex Kurtzman has said that Janeway has "experience" navigating the unknown, which implies this Janeway will exist post-Voyager. And yet, if Prodigy was pre-Voyager, it might be much easier for the canon stuff to match-up. If this is a younger version of Janeway, then she could be operating around the same time as the first season of The Next Generation.

Prodigy happens after Voyager, but before Nemesis

The third option is probably most likely. Prodigy is likely set sometime during 2378 and 2379, but it's before Janeway has been promoted to Admiral. There's an entire year gap here for Janeway to have done all sorts of things before taking the Admiral job, and because she loves time travel so much, you never know how much she might have packed into one single year.

The NYCC 2020 panel did not make the timeline entirely clear, but from the sound of it, this show will be a show about Janeway as much as it is about kids.