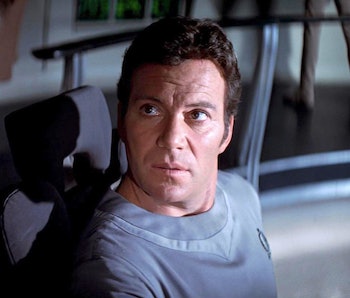 In Star Trek III: The Search For Spock, Uhura gets one of the best lines in the entire franchise. When an incompetent and cocky young officer says "Have you lost your sense of reality," Uhura busts out a phaser and says "This isn't reality, this is fantasy!" It's a great joke, but what if there was something more to Uhura's "fantasy" burn? Are the Star Trek films operating on a different realism level than the Trek TV shows? Or, to put it another way, does the canon of the Trek films exist in a slightly different and more hyperbolic canon than the shows?

One well-placed joke Star Trek: Lower Decks, Season 1, Episode 9, "Crisis Point," will really make you think about the things that can happen in a Trek movie versus a Trek show, and once you start doing that, madness may ensue. So, what happens when we pit the Trek movie canon against the Trek TV canon? Beam aboard...if you dare. Mild spoilers ahead for Lower Decks, Episode 9, "Crisis Point."

Hilariously, the entire premise of "Crisis Point" puts the Lower Deckers into their very own holographic Star Trek movie. This results in an over-the-top revenge-plot, plenty of J.J. Abrams lens flare, and a starship crashlanding to beat all starship crash landings. It also features an excellent joke from Rutherford, who after performing an off-screen live-saving stunt with the transporter, says this: "No, it’s a movie you can beam whatever- you can do all sorts of beaming stuff in a movie!”

He's right. In Star Trek movies, the beaming technology frequently works in ways that it never would in the various TV series. Without getting too in the Trekkie weeds (that's coming in a second) it's safe to say that the reason why Rutherford's joke lands is that Trek movies tend to be a little more fantastic and over-the-top than their TV progenitors. But, because Lower Decks is Trek canon, what does this joke actually mean? If we take Rutherford's point and run with it all the way to the transporter room, do we end up with separate Trek movie and TV canons?

The case for Trek movies and TV sharing the same canon

Well, this case could be made fairly easily by just saying: They are already canon. But that's not exactly fun, is it? Back in the '70s and '80s, Trek creator Gene Roddenberry himself took a slightly looser approach, specifically in regard to how things actually looked. From the redesign of the Klingons to the improved special effects of the films, there's a general sense from the classic films that TOS was a rough draft, and what we saw in the films was the real deal. This retcon is so deep that Khan's necklace in The Wrath of Khan kind of requires you to believe that that specific style of Starfleet buckle was in use during the time of TOS, but we just never actually saw it, and it just happens to match up with the new style of Starfleet buckle from the movie era. Khan also muses that he ruled Earth "200 years ago," when actually it should be 300 years ago. He also says he remembers Chekov, even though Chekov was not in "Space Seed."

These inconsistencies aren't really things anyone questioned, at least, at the time the TOS films came out. You could kind of squint and imagine that the films occupied a different canon. Did you know that The Motion Picture is supposed to take place only a couple of years after TOS? YEP! Even though Kirk and the crew look ten years older and dress in '70s bell-bottoms, the film is supposed to be right after the original series.

Beyond faulty memories from specific characters (Khan), we're mostly talking about how things look, rather than how things are. If we only focus on events, rather than aesthetics, it's pretty easy to make the canons of all the Trek movies work with the TV series. Worf transfers to space station Deep Space Nine in Season 4 because the Enterprise was destroyed in Generations.

The events of First Contact are referenced in the prequel series Enterprise, including a time-traveling Borg sphere from the future. The Khitomer Accords are referenced in various Trek shows like The Next Generation and we see the beginning of those peace conferences inThe Undiscovered Country. Finally, the events of Picard are predicated upon two events that occurred in different Trek films: the Romulan supernova from Star Trek (2009) and Data's death from Star Trek: Nemesis. In other words, although we think of Picard as a sequel TV series to The Next Generation, it relies more on the canon of two films, one of which takes place (partially) in a separate dimension. (I.E. the supernova is from the Prime timeline, but causes the Kelvin timeline to exist.)

We could nitpick about uniforms and Kirk's toupee all day long, but none of that would prove there's a separate canon for the Trek films. After all, those films — Star Trek (2009), Into Darkness, and Beyond — go out of their way to institute a separate timeline and with a canon (mostly) unrelated to the regular one. Conventionally, this would leave the remaining 10 films (and aspects of the backstories of the reboots) firmly in the regular canon. Since so many events are cross-referenced across both mediums, this seems like the easiest way to go. There are some events that seem self-contained to the films, which could suggest that the continuity of the films is parallel to the shows, and not exactly the same.

Part of the reason we're in this mess is that Lower Decks made this joke about how beaming in movies is different than beaming in the TV shows. In Star Trek (2009), Scotty and Spock use something called "transwarp beaming" to send people from planets, onto moving starships that are thousands of lightyears away. If we took Scotty's transwarp beaming tech to its logical conclusion, you wouldn't actually need starships, like ever again. But super-powered tech in the Trek movies isn't just limited to beaming. The terraforming tech of the Genesis Device in The Wrath of Khan seems like it would have been super-useful in the era of TNG, but we never really hear about terraforming on this scale again. The USS Excelsior in The Search For Spock supposedly had a new transwarp drive, but we never got to see that in action, ever.

These kinds of technological leaps (long-distance beaming, transwarp drive, super-terraforming) are basically never mentioned in any TV series outright. There's one mention of Carol Marcus (the creator of the Genesis Device) in Voyager, but it's not like the shows ever used these tech MacGuffins again. This means you could theorize that the events of the Trek films might have occurred in a slightly different way in the TV canon than they did in the movie canon. In fact, Voyager itself gives us an example of how this alternate movie canon might work. In the episode "Flashback," Tuvok and Janeway go deep into Tuvok's memories, during the time he served on the USS Excelsior under Captain Sulu. This means the bulk of the episode happens in a flashback inside of the film Star Trek VI: The Undiscovered Country. Now, in real life, some of the scenes from The Undiscovered Country were reshot to match-up with the filming style of Voyager and to create a seamless transition between the scenes with Tuvok and Sulu.

How to have it both ways

So here's the theory: Rutherford is right. The beaming tech in Star Trek movies, combined with people who are alive who should be dead, combined with a necklace that Khan shouldn't have, all suggest that the Trek films are a little rowdier with canon than TV.

There is a third way. Maybe it's not that the shows and the movies exist in separate canons, but there is another, larger, more "real" canon we'll never be aware of. Here's a sideways example: In the Sherlock Holmes stories, Watson narrates most of the stories, and within those stories, Holmes points out that Watson's versions of some of the stories aren't accurate and that he takes artistic license with actual events. A few stories in the Holmes canon are narrated by Holmes himself, which doesn't' really correct the larger "canon" of Holmes, but only further gestures at the idea that an objective truth (about this fiction) is just beyond the reader's grasp.

Now, you might say that Star Trek doesn't have subjective narrators like Holmes or Watson, but are you sure? A vast majority of Star Trek stories are framed through a "Captain's Log." Lower Decks plays with this conceit too, by having Boimler record a fake Captain's Log in the first episode. Even Star Trek: Discovery Season 2 relies on voiceover from Burnham to keep the story moving along. Taken together, this means that if you think about, Star Trek does have several competing subjective narrators. Broadly speaking, these various point-of-views could account for all kinds of continuity discrepancies, because different people are "telling" the stories.

Granted, in some Trek episodes and movies, this would require several point-of-view changes, but the point still stands. Khan and Kirk never meet face-to-face in The Wrath of Khan, meaning, you could argue that their experiences in their individual scenes are told from their own points-of-view, which could allow for all kinds of canon to not match-up, even within the same movie. Ditto for Tuvok's memory of Valtane dying in Voyager, even though that dude is totally alive in The Undiscovered Country. It's not that the canons of the movies or the shows are separate, it's that Star Trek might have so many narrators, that we're not sure who is telling us the objective "truth."

In Star Trek V: The Final Frontier, Spock objects to the lyrics of "Row, Row, Row Your Boat," because he states plainly, "Life is not a dream." But, once you dig into the crazy canon of Trek, and the myriad narrators who might be telling us their stories, it's easy to see how Spock might be wrong. In some stories, for some characters, life is very much a dream.