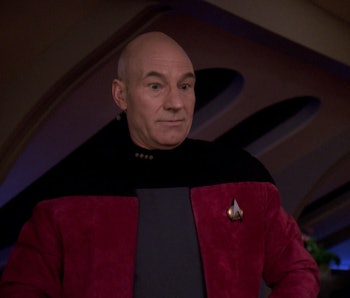 We've known since before Lower Decks debuted that it would have a substantial connection to the entire canon of Star Trek. Ahead of the show's debut showrunner Mike McMahan told Inverse that a few "legacy actors" would appear on Lower Decks. Thanks to a reveal during Star Trek Day, we know exactly who is returning. Let's just say, if you like The Next Generation, Deep Space Nine, or Voyager, you're going to be thrilled. Snap your fingers! Lower Decks spoilers ahead.

Starting with the first TNG episode ever — "Encounter at Farpoint," — and spanning the entirety of that series, one guest spot on DS9, and several episodes of Voyager, "Q" has bothered and messed with Starfleet crews in a variety of ways and in several guises. Famously, "Q" put humanity on trial for all of its crimes in TNG, and continued to observe the species with close interest throughout The Next Generation's seven-year television run.

In this brief clip played during the Lower Decks panel at Star Trek Day on September 8, "Q" is back in his ominous judge's robes, standing on the bridge of the USS Cerritos saying "ta-dah!" We have no idea what role "Q" will play in Lower Decks, but McMahan implies it's a short cameo.

"I think fans will be able to spot him," he joked during the panel. Admittedly, the strange outfit is a pretty dead giveaway.

McMahan also says that the actor Kurtwood Smith will also appear as an alien called "Klar." As McMahan mentions, Kurtwood Smith played the President of the United Federation of Planets in Star Trek VI: The Undiscovered Country. Throughout that film, he struggled to defuse tensions between skeptical members of the Federation and Klingon diplomats appealing to Earth for aid.

For fans of genre movies in general, Smith is probably most famous as the villain in the cult-classic Robocop, which also featured Ronny Cox, who eventually played Captain Jellico on The Next Generation.

Are there more cameos the minds behind Lower Decks aren't revealing just yet? Maybe, maybe not. But, we now know "Q" himself will appear any episode now. There are only five episodes left, so you'll have to watch closely.

Lower Decks airs on Thursdays on CBS All Access.

More like this
Entertainment
8.9.2022 1:00 PM
Has your favorite HBO Max show been canceled? The fate of 9 sci-fi series revealed
By Robin Bea
Entertainment
8.12.2022 4:04 PM
The Mandalorian Season 4 is coming sooner than expected
By Dais Johnston
Entertainment
8.11.2022 12:30 PM
For All Mankind’s game-changing Season 3 twist had been planned since 2018
By Ryan Britt
Related Tags
Share: