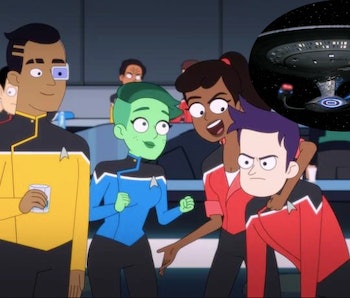 Hardcore Trekkies are probably already aware that the newest series — Star Trek: Lower Decks — takes place in what can be conventionally called "The Next Generation" era. The setting is the year 2380, which is just one year after Star Trek: Nemesis and at least five years before the earliest flashback in Star Trek: Picard. The series also has a decidedly TNG vibe, which makes Lower Deck's overall aesthetic perhaps the most familiar for fans who remember the glory of days of '90s Trek. (Lower Decks is even named after an episode of TNG.)

But the nostalgia doesn't end there. Lower Decks creator, Mike McMahan tells Inverse that existing "legacy" characters will, in fact, return for the new series.

While speaking to Mike McMahan and Lower Decks lead voice actor, Tawny Newsome, Inverse learned that the new series will 100 percent check-in on a few existing characters from the franchise. McMahan didn't say which characters we'll see, but because of the time period setting of the series, it's a good bet we're dealing with cameos or guest stars from The Next Generation, Voyager, or Deep Space Nine.

When asked about the possibility of Ensign Mariner (Newsome) crossing-over to Picard season 2 or even Discovery, McMahan flipped the crossover question back to Lower Decks:

"That’s interesting because we do have legacy actors who show up in the first season of Lower Decks and we have gotten to have a little bit of where are they now sort of vibe through a Lower Decks lens. But I gotta say, if anyone wants Mariner to show up on their live-action Star Treks, you’ve got to have Tawny."

McMahan didn't reveal which episodes these "legacy actors" might "show up" in, nor, of course, did he confirm who we were talking about. It feels like anyone from Picard is off the table, but then again, a pre-Fenris Rangers Seven of Nine is possible. DS9 fans are probably ready for a little bit of love, considering the DS9 references in Picard Season 1 were almost non-existent. And, other than Sisko (who, recall, is a space deity at this point) it seems like several characters — from Worf to Kira to Bashir — could be reasonable candidates. Then again, because Lower Decks is all about deep-cuts and obscure references, who knows, maybe we're dealing with the return of Naomi Wildman or even Yoshi O'Brien, the younger brother of Molly O'Brien that for some reason we never talk about.

Then again, because Lower Decks does feel closely tied to TNG, maybe it's about time we saw Wesley Crusher (Wil Wheaton) again. What's he doing with the Traveler these days anyway?

(Disclaimer: As of this writing, we do not know which legacy actors McMahan is referencing. If any of the above are correct, it truly is a very, very lucky guess.)

Come back to Inverse on August 6 to read our full interview with Mike McMahan and Tawny Newsome about the launch of Lower Decks.