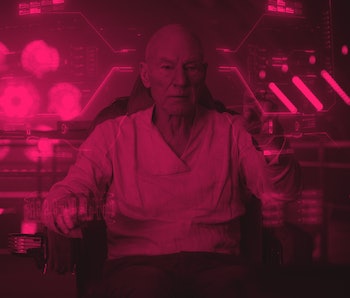 Goldsman did a lengthy interview with Collider editor-in-chief Steve Weintraub. The conversation covered a lot of ground, including Superman movies not made, and Goldsman's famous (or infamous) collaborations with Joel Schumacher. But, for Star Trek fans, Goldsman's biggest role in the past three years has been a producer and writer on Discovery and Picard. Goldsman will also produce Strange New Worlds, though it appears that he still wasn't talking about "the Pike series" when this interview was conducted.

According to Goldsman, the basic outline of the story of Picard Season 2 has been laid out.

"We know what it is, "Goldsman told Collider. "It's cool. We learned a lot from Season 1."

Right now, it seems Season 2 of Picard will be a 10-episode arc, just like the first season. Goldsman indicated that about half the episodes had been written, but production delays will give them even more time with the scripts. Picard Season 2 was supposed to start filming this June, but now it's unclear when it will begin.

Weintraub suggested that having Season 2 plotted in advance could speed up the shooting schedule once distancing restrictions lift. Goldsman said that wasn't the plan, adding that it's not clear how quickly Season 2 will be completed, or when shooting will even be allowed to begin.

“It is fundamentally a gift to spend more time with the scripts," Goldsman elaborated. "This kind of 10-hour narrative has set-ups and payoffs that requires a more thoughtful view of the object once it's been created.”

3. How many seasons will Picard last?

Goldsman told Collider that nothing has been set in stone, despite a broad perception amongst Trek fans that the series will likely have a relatively short run. "We have discussed it a three-season show, a five-season show, a let’s just keeping going forever show, but in my view, Star Trek: Picard will go on as long as Patrick Stewart wants it to."

One thing Goldsman objected to was the idea that the first season of Star Trek: Picard was labeled as "dark" by some critics. (Certainly not us!)

"There were all these reviews that came out that said 'it’s so dark, it’s so dark, it’s so dark.' And I was like, 'eh, they’re reviewing the first act of a movie.' If you stopped It’s a Wonderful Life at the bridge, it’s a really dark movie. Because, fundamentally, in a long-form narrative — if its a redemption story, if it’s a healing story — it has to be bad at the beginning so it gets good in the end. We’re in this weird world now where we create one narrative object, but we dole it out, bit by bit."

1. Will Picard Season 2 include more Next Generation characters ?

Collider asked this question directly, but Goldsman dodged it. Some rumors — generated by LeVar Burton himself — have suggested Geordi LaForge and the entire cast of TNG will appear in Picard Season 2. Goldsman stopped short of confirming any of this, saying" No...I want to. But no."

Still, if we're being honest, this seems like a secret Goldsman and the other Picard people are keeping for the sake of keeping it. It seems inevitable that we're gonna see someone from The Next Generation again. Now, it's only a matter of time.