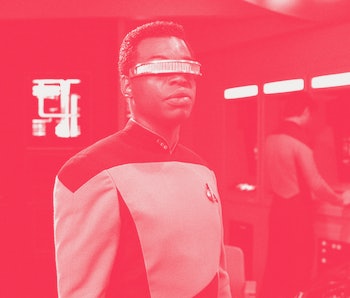 The return of Geordi La Forge in Season 2 of Picard could be even bigger than most Star Trek fans have even considered. When The Next Generation began in 1987, Sir Patrick Stewart wasn't the most famous face on the show. As TNG producer Rick Berman told Michael Chabon before the launch of Picard, LeVar Burton was super famous, thanks to his role as Kunta Kinte in Roots and from hosting Reading Rainbow.

As a child who watched TNG from day one, I can attest this is true; Geordi La Forge was the primary reason I watched, and the most important person on the Enterprise.

Now, more than three decades later, LeVar Burton is likely returning to the Final Frontier in Picard Season 2. Here's why his potential comeback is essential to Jean-Luc's survival. Spoilers ahead for Picard Season 1. Speculation for Season 2 follows.

According to ET Online, Burton expects you'll see the entire cast of The Next Generation in Season 2 of Star Trek: Picard. Here's the relevant quote for Burton himself:

"How do I answer this without getting myself in trouble? I think it is reasonable to think that those people are still a part of Picard’s life. Sure, what the hell, absolutely...You will see us all, probably not all at the same time but... You know, never say never."

Now, Burton stops short of confirming he'll appear in Picard Season 2, but for most of us, this is close enough. Back in 2017, Jonathan Frakes teased the Mirror Universe would happen in Discovery. Frakes later teased Spock's appearance in Season 2. So the actor who played Geordi saying "you will see us all" is probably a pretty solid indicator.

If the Picard writers are smart, they'll make Geordi's involvement more than just a cameo. Here's why.

Picard Season 1 focused on a conspiracy that made Synths revolt on Mars, destroying a fleet of starships meant to aid Romulan refugees. Guess who was in charge of building those ships in the first place? That's right: Geordi La Forge.

In the IDW comic series Countdown (co-written by Picard producer Kirsten Beyer), we discover Jean-Luc enlisted Geordi's help in creating the armada, which included retrofitting of old starships and building a bunch of new ones. After Starfleet pulled the plug on the Romulan Rescue following the Synth revolt, there's a good get that Geordi's life was deeply impacted. Raffi basically lost her job in Starfleet after the Synth revolt, but what about Geordi? Arguably, because he was in charge of the logistics concerning those specific spaceships, it's very possible things got bad for him, too. In the alternate future, we saw in "All Good Things..." Geordi retired from Starfleet and become a novelist. But here in the real timeline, things might not have ended up that cushy.

Exploring what happened to Geordi after the Synth revolt is perfect for Picard Season 2 because Geordi is already connected to the backstory for Season 1. He's super familiar with everything that happened, and in addition to Raffi, was a big part of Picard's team to help save the Romulans.

2. Geordi may be Picard's "physician"

After Picard Season 1, Jean-Luc is no longer human, but a synthetic lifeform. So there's a good chance he'll need some regular "maintenance" for his new body. Sure, that may be why Dr. Jurati is sticking around, but one could argue her experience with android problems is mostly theoretical. Picard knows someone with lot's of hands-on experience with androids — Geordi La Forge.

Throughout The Next Generation, Geordi was the de facto expert on working on Data whenever something went wrong. Along with Dr. Bashir of Deep Space Nine, Geordi helped Data discover his dream program in "Birthright Part 1," helped Data build his first android daughter, Lal in "The Offspring," ran countless diagnostics on Data's brain throughout the show, and even helped "upgrade" Data with an emotion chip in Star Trek Generations. Geordi was also Data's best friend. Sure, Picard may have been Data's surrogate father figure, but it's not like Data invited Picard to play Sherlock Holmes with him on the holodeck. Geordi was his bestie, and it makes sense that Geordi would want to check-in the legacy of Data, which includes Soji, and the new body of Picard.

Plus, the question remains if Picard will "reveal" to the general public that he's now an android. If he does opt to keep that info on the down-low, the one person he'd probably confide in would be Geordi La Forge.

Okay, this has nothing to do with Star Trek, but remember that butterfly in episodes 9 and 10 of Picard? When Data dies in the finale, he mentions "the butterfly that lives forever is not really a butterfly at all..." The flight of this butterfly is kind of a big deal in the finale and seems to symbolize both Data's death and Picard's rebirth. But let's get real: It's also an intentional Reading Rainbow reference. In the classic children's PBS series, hosted by LeVar Burton, the intro song goes like this: "Butterfly in the sky, I can go twice as high. Take a look. It's in a book...a Reading Rainbow."

When you consider that the ending of Picard Season 1 (accidentally?) homaged the beginning of Reading Rainbow, the prospect of Burton's return for Season 2 becomes certain. The only question now is whether or not he'll be in one episode or several. Either way, it seems pretty damn likely that Geordi will be back, and you don't have to take my word for it.

Picard Season 2 is in development and expected in 2021. Here's everything we know.