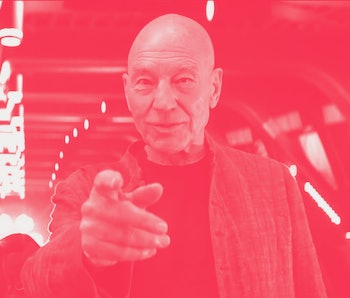 Did the Season 1 finale of Picard introduce a new character into the complicated canon of Star Trek, or did we simply get a glow-up of a familiar face? This has been debated by fans since "Et in Arcadia Ego Part 2" aired two weeks ago. The question is so fraught that a super-reliable Star Trek fan wiki — Memory Alpha — briefly exploded the issue by creating a new character page to account for the unprecedented canon shift.

Season 1 showrunner Michael Chabon hints one of the biggest fan questions won't be fully explored until Season 2. Spoilers ahead for Picard Season 1.

The Picard finale saw the beloved former Enterprise captain become a synthetic lifeform. In the framework of the series, we're calling this Picard's "Golem," but anyway you slice it he's basically an android now. He appears human and certainly isn't immortal. He has the same memories, but if all the parts have been replaced, is he still the same person?

Doctor Who fans might remember Peter Capaldi's 12th Doctor ranting about this in the episode "Deep Breath," where he accosted a scavenging cyborg by saying "There's not a trace of the original you left!" In philosophy, this question is labeled the "ship of Theseus paradox," referring to the story of a mythical Greek ship which had every single plank replaced over the course of its "life." Is it the same ship if all the parts are different? Is Jean-Luc the same person with an artificial body?

Interestingly, there aren't many precedents for this kind of thing in Star Trek canon, which is why the questions about Picard's new "identity" are in flux right now. Clearly he's no longer human, but is he a different character?

When directly asked this question during his popular Instagram fan talkbacks, Chabon strongly hinted that Season 2 will deal with the philosophical issues raised by Jean-Luc's robotic resurrection. When one fan asked him if the show will deal with those "philosophical implications" Chabon responded, "Will it, indeed." When someone asked if Picard will think about "Ship of Theseus ponderings" Chabon said, "I would."

Having a prominent figure like Jean-Luc Picard become fully synthetic is a pretty big deal. This isn't like a Darth Vader/Anakin Skywalker situation, or even Jean-Luc's old artificial heart fromThe Next Generation, this is an entirely new body and artificial brain. Other than the intangible nature of his memories, everything else is different. Hell, even when the Doctor on Doctor Who regenerates into a new person, they tend to keep the same two hearts.

In an attempt to reconcile the situation, the comprehensive Star Trek fan wiki Memory Alpha briefly classified the new body as a new character, "Jean-Luc Picard(Golem)." This is a pretty standard practice in fandoms with multiple versions of characters. For example, Captain Georgiou from the Prime Universe in Star Trek: Discovery is Philipa Georgiou, but Emperor Georgiou from the Mirror Universe would be classified as a different character; Philipa Georgiou (Mirror). Ditto for Spock from the Kelvin Universe (Abrams movies) versus Spock from the Prime universe: Zachary Quinto's version is considered a separate character. Contrasting this is the idea that Ethan Peck in Discovery Season 2 is Prime Spock, even though he's also young Spock. In other words, retcon does not create a new character, but (sometimes) reboots, do.

Also, meeting yourself via time travel doesn't necessarily create an alternate version of yourself, but then again, sometimes it does. In the TNG episode "Time Squared," Picard met a six-hours-in-the-future version himself via time travel. We're not meant to think that was a "different' Jean-Luc Picard. Then again, because one of those Picards was killed, it kind of floated the concept of a mini-parallel universe. (Briefly)

Making matters more confusing is the Star Trek: Voyager episode "Deadlock," where Ensign Harry Kim was 100 percent killed, and "replaced" by a version of Harry Kim from a nearly identical alternate universe. In some ways, Harry Kim joining the "real" crew of the USS Voyager in that episode, is the nearest Trek canon precedent to what we're dealing with now. (Sidenote: Voyager also has an entire episode called "Course: Oblivion" which takes place from the POV of an entire crew of synthetic doppelgangers who all die before they meet anyone "real." This is, perhaps the ultimate "if a doppelganger falls in a forest, did it ever exist?" scenario, ever.)

In the Picard finale, we didn't get a shot of Jean-Luc looking at his dead (human) body, but it's something that Chabon has said is "interesting," which means it could happen in Season 2.

Right now, if you go to the "Jean-Luc Picard(Golem)" page on Memory Alpha, you'll find it's been removed. As TrekMovie pointed out, this happened after a huge discussion in the wiki sparked a very long debate. Even though Chabon and producer Alex Kurtzman have gone on record saying that Picard is "the same person" as before, the debate is far from over. Soji and the other Synths experienced a huge amount of prejudice in Season 1, which implies Picard could experience that in future episodes.

The paradox of Picard's identity is perhaps better set up in Nemesis, where he fights a younger clone of himself (Tom Hardy) who has totally different life experiences. Golem Picard is seemingly the exact opposite, but will the rest of the galaxy see it that way? That question will undoubtedly be a huge focus for Season 2. One doesn't just transform the greatest Starfleet captain ever into a robot, and then never talk about it again, right?