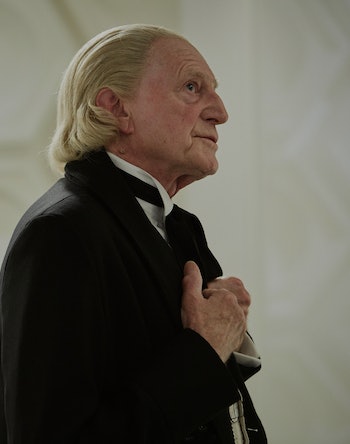 Grumpiness and heroism are often connected, but incompetent heroes are rarer. In 1963, Doctor Who introduced the world to a new kind of TV character. Calling himself just “the Doctor,” William Hartnell played an irascible time traveler who was incompetent to the point of being villainous. “He’s not infallible, and he puts his fellow travelers in great danger at times,” says David Bradley. For the upcoming 2017 Doctor Who Christmas Special — “Twice Upon a Time” — Bradley has returned to play Hartnell’s 1st Doctor. But, as diehards know, though this is Bradley’s first turn as the canonical Doctor, it’s his second time playing the actor William Hartnell.

Depending on which kind of science fiction and fantasy fan your are, David Bradley probably represents a different fictional world. For those who love the blood, sex, and tears of Game of Thrones, Bradley is the treacherous Walder Frey. If you’re a Potterhead, he’s Argus Filch, the tough-as-nails groundskeeper of Hogwarts, responsible for sending Harry Potter to the Forbidden Forest in the very first film. Sensing a pattern? Bradley even played a bad guy on Doctor Who before, too. In the 2012 episode “Dinosaurs on Spaceship” he squared off against Matt Smith’s 11th Doctor as an outer space poacher named Solomon. But now, he’s the good guy. In fact, you might say, he’s the original good guy.

“I suppose what attracts me to the character of the Doctor is that he’s a true adventurer,” Bradley tells Inverse. “He’s got this endless curiosity. He’s a true eccentric who’s just curious about the universe and everything in it. I admire him for that.” Thanks to the nature of time travel stories on Doctor Who, meeting yourself in a past life is actually pretty common. Among fans, multi-Doctor episodes are among the most beloved, in fact, 2013’s 50th Anniversary “Day of the Doctor,” technically features all thirteen canonical Doctors up to that point. After “Twice Upon a Time,” there will be fourteen. Peter Capaldi will transform into Jodie Whittaker’s new take on the Time Lord sometime during the course of the Christmas Special. But before all that happens, Capaldi’s incumbent Doctor will have an adventure with his very first incarnation. Neatly, as Capaldi’s Doctor faces his impending “regeneration” — a process by which he’ll continue to live, but become a new person — Bradley’s Doctor will also be facing the very first regeneration.

“You’ve got these two Doctors who are not exactly suicidal, but they’ve had enough,” Bradley says, speaking to the themes of the new episode. “I think a lot of the dynamic and the energy from it comes from these two worlds colliding. The 1st Doctor looks at the 12th Doctor and sees sonic screwdrivers, electric guitars, and he’s kind of disapproving. It’s a generation gap thing. Of course, the 12th Doctor is looking at the 1st Doctor and thinking ‘who is this crusty old dinosaur with his politically incorrect attitude to everything that’s rooted back in the ‘50s and ‘60s.’”

The idea that you can have a generation gap with yourself is one of the many things that make Doctor Who not only delightful but irrelevantly introspective. And this meta-fictional element gets deeper in “Twice Upon a Time,” simply because David Bradley is doing double duty as not only a playing a character but also convincing older fans that he is, in fact, William Hartnell. Luckily he has some experience. Back in 2013, Bradley played William Hartnell in the docudrama “An Adventure in Space and Time,” which chronicled the early days of Doctor Who in real life. “Then, I was more focusing on the man himself rather than the performance, because it was about how he got the part and about his work on it and how the whole program evolved with his inclusion,” Bradley explains, but is quick to point out that fans shouldn’t expect a replication of his performance in 2013 for “Twice Upon a Time.”

“I just tried to capture his spirit more than anything else and have a bit of fun with it.”

“The script for the Christmas special was all performance as him as the Doctor. The first time I was playing the actor playing the Doctor. But this time I felt I was playing the Doctor himself, which was quite a difference really. This time, I studied a lot of his physical and vocal mannerisms but without being too finickity or too fussy about it. I just tried to capture his spirit more than anything else and have a bit of fun with it.”

Naturally, because of the epic nature of the 1st Doctor teaming-up with the incumbent Doctor, Bradley can’t reveal too many details of the script. Will the 1st Doctor witness the 12th Doctor’s regeneration? Does the 1st Doctor share a scene Jodie Whittaker’s 13th Doctor? Bradley can’t say. But he is sure that the script — the last story written by longtime Who showrunner Steven Moffat — will be fun. “I was pleased to see Steven had made it funny as well as exciting and rather spectacular at times,” Bradley says. “I just knew the script would be good. I just threw myself behind it and said yes, I just want to do this.”

Part of Bradley’s attraction to taking the role comes from his admiration for Hartnell, but he also thinks there’s something special about the Doctor as a character that fulfills all sorts of deep-rooted desires.

“Haven’t we all at some point in our lives thought I wonder what it would be like to go back to Roman times or prehistoric times or Elizabethan England and see Shakespeare and his company performing on the stage? I mean, that’s my particular one,” Bradley says, chuckling warmly. “We’ve all got, I think, a little bit of time travel fantasy in us. Don’t you think?”

The Doctor Who 2017 Christmas Special — “Twice Upon a Time” — airs December 25 at 9pm eastern time on BBC America.