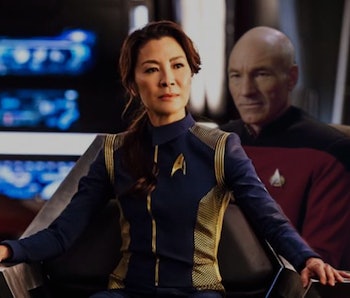 Even though Star Trek: Discovery will take place 55 years before Jean-Luc Picard was born, the series will nonetheless slip in a slick reference to the beloved captain. And it will happen in a way that will delight fans of The Next Generation, those who love the 2002 film Star Trek Nemesis, and wine snobs.

On Monday, TrekCore released a slew of information about Star Trek: Discovery gleaned primarily from various reports coming out of press tours on the set of the show in Toronto. And the coolest detail of all was easily the fact that “a Château Picard bottle of wine has a spot in Captain Georgiou’s ready room.” This references the fact that Jean-Luc’s family have been winemakers for several generations before the famous Starfleet captain was born. We saw Picard visit the winery in the TNG episode “Family,” and also in “All Good Things…”

Château Picard is also a real place and a real winemaker! It’s a fairly small estate in France, and it is very proud of its association with Starfleet in the future. A bottle of Château Picard was also enjoyed by the crew of the Enterprise in the final scenes of Star Trek Nemesis.

The presence of the bottle in Captain Georgiou’s ready room in Discovery primarily means one thing: The people making Star Trek: Discovery care about continuity and canon in Star Trek.

In addition to even more Easter eggs from the entire Trek canon popping up in Star Trek: Discovery, the presence of this bottle of wine could indicate that the show might possibly play around with introducing an ancestor of Jean-Luc’s at some point in the season. Then again, maybe not. But, if Captain Georgiou or Captain Lorca say “engage!” they’re not ripping off Jean-Luc Picard. Both Captain Pike and Captain Kirk said “engage” on the old Star Trek a bunch.