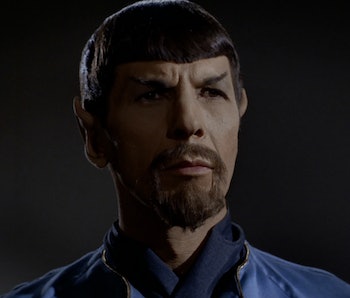 Star Trek: Discovery will likely include a visit to the mirror universe, an alternate timeline that’s played out across several Star Trek series and has been major favorite among fans.

The news was confirmed by Number One himself, Jonathan Frakes, during a panel event in Chicago as part of the Continuing Voyage convention, which is celebrating the 30th anniversary of Star Trek: The Next Generation.

It makes sense that Frakes might have the inside scoop; he’s been enlisted to direct an episode of the first season. Frakes is already well acquainted with the other side of camera especially when it comes to Star Trek. He’s directed episodes of TNG, Voyager and Deep Space Nine, as well as the Star Trek films First Contact and Insurrection. However, according to Comicbook, Frakes’ latest episode won’t be the mirror universe one. Instead, it will apparently focus heavily on Klingons.

Although the title of the first episode of Discovery has been revealed, we still don’t know a lot about the plots that will propel the narrative of Star Trek: Discovery, as the show has been pretty tight-lipped. But mirror universe episodes have always been a hit with fans, popping up in the original series, Deep Space Nine and Enterprise. The concept first appeared in the original series in an episode titled “Mirror, Mirror.” In it, Kirk, Uhura, Scotty and McCoy travel to an alternate timeline and meet mirror versions of themselves — and an infamously goateed mirror Spock.

In that episode it’s revealed that in the mirror universe, the Federation of Planets never formed. We know that Discovery’s timeline is set a few years before the original Star Trek takes place, and based on the mirror episode in Enterprise (set in the time before Discovery) we know that the universe Discovery will encounter is a pretty dark place.

Despite being confirmed by Frakes, we still have to take this news as pure rumor for now, since it hasn’t been officially confirmed by the show itself. Still, it’s fun to imagine which Discovery character might get a goatee.

Star Trek: Discovery will debut on September 24 at 8 p.m. Eastern on CBS.