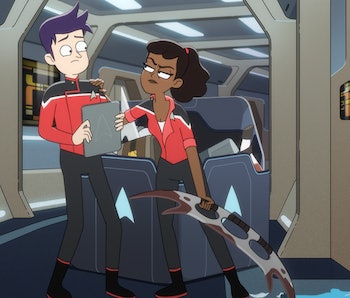 As part of the San Diego Comic-Con 2020's "Star Trek: Universe" panel, the very first scene of the new animated series Lower Decks was revealed. It contains an homage to one of Star Trek's best inside jokes of all time: The consequences of too much illegal space alcohol. Here's the new scene, and why it's a great way to kick-off the new series.

Explaining a joke rarely makes the joke funnier, but that's not always the case with Lower Decks. In the opening scene, we learn the USS Cerritos is assigned to "Second Contact," which means they go back to alien planets already contacted by the Federation.

The moment reveals two of our main characters — Ensign Mariner (Tawny Newsome) and Ensign Boimler (Jack Quaid). Mariner is 100 percent more fun. As they've been docked at a Starbase, Mariner says she's scored a bunch of "Shore Leave contraband," meaning, random stuff Starfleet officers weren't supposed to have while they were taking a vacation. It's at this point that Boimler points out she's drunk.

Boimler: Are you drunk!?

Mariner: "Yeah dude! You should be, too! This station is amazing! They have Romulan Whiskey! I bet you thought it was going to be green, but it's actually blue...it's this very beautiful color."

Boimler: Romulan whiskey is against regulations!

Mariner: Yeah, cause it's awesome.

This exchange references Trek's long-running joke about funny-colored space booze, and how often said space booze is supposedly made illegal, only to have Starfleet officers get wasted on it anyway. In The Original Series episode "By Any Other Name," Scotty drank aliens under the table, famously imbibing something he couldn't identify and simply saying "It's green." This joke was repeated in the TNG episode "Relics," where Data serves Scotty a random green bottle of booze, which also leads to some serious drunkenness.

More famously though, "Romulan Whiskey" is an allusion to Romulan Ale, first mentioned in Star Trek II: The Wrath of Khan. Early in that film, Bones stops by Kirk's apartment in San Francisco to give him a birthday present: a bottle of Romulan Ale. Here's the scene:

Bones: I only use it for medicinal purposes.

Later, Romulan Ale was mentioned several times in the franchise, notably in Star Trek VI: The Undiscovered Country in which Kirk has a straight-up hangover from drinking too much of it and mentions in his Captain's Log: "Romulan Ale no longer to be served at diplomatic functions." By the time of Star Trek: Nemesis, which takes place just one year before Lower Decks, Romulan Ale was still illegal. At the wedding of Riker and Troi, Worf has too much of it and notes that it should be illegal and Geordi replies, "It is." Even in Star Trek: Picard, Soji, and Narek shared a bottle.

Now, we've never heard of Romulan Whiskey before now — just the ale — but apparently, it's just as potent and just as against-the-rules. It's funny too because the Romulans are so buttoned-up and cold, you wouldn't think they'd make the rowdiest space booze in all of Star Trek. Then again, Star Trek itself has a reputation for being a little buttoned-up too. But, as the first scene of Lower Decks proves, Star Trek has always known how to cut loose.

Lower Decks comes to CBS All Access on August 6.