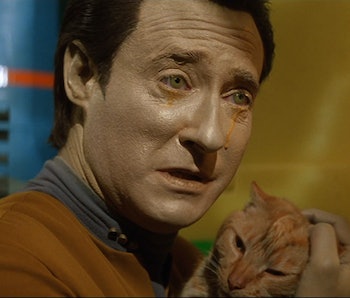 If you were worried Picard was a slow-ish Star Trek series, the fourth episode — "Absolute Candor" — kicks things into literal and figurative warp speed. Centering on Picard's quest to recruit a badass Romulan warrior, the episode also re-introduces several familiar hallmarks from The Next Generation, including holodeck tech, Picard's management style, and a few very familiar sound effects.

The episode also had some sly Easter eggs about Data's pet cat, a very retro spaceship, and a surprise visit from a familiar Voyager star. Here are all the deep cuts from the Romulan sword in Picard episode 4, "Absolute Candor." Spoilers ahead.

Throughout the episode, Jean-Luc and several other Romulans say "Jolan tru" to each other in the Romulan language. The subtitles tell us this means "hello." It can also mean "peace be with you," or "may your day be filled with peace." The phrase originates in the TNG episode "Unification," in which Data and Picard go undercover on Romulus and chill with Spock.

15. The Three Musketeers and fencing lessons

Picard gives Elnor Alexandre Dumas's classic novel The Three Musketeers. The book and fencing in general have several Trek precedents. In the TOS episode "The Naked Time," Spock sarcastically calls Sulu "D'Artagnan," after he goes wild with a sword. In the TNG episode "Hollow Pursuits," a hologram version of Picard looks and acts just like one of the Three Musketeers. Picard also fences and sword-fights a decent amount in TNG, specifically in the episodes "We'll Always Have Paris," "I, Borg," and "Q-Pid."

In the new episode, we're told Jean-Luc "dislikes displays of emotions and is not overly fond of children." This references the very beginning of TNG, the episode "Encounter at Farpoint," in which Picard yells at Wesley, and generally questions why a starship even has children on it. He repeats this bias in the episodes "The Bonding" and "Disaster."

13. Communicator under the skin

When Raffi calls Jean-Luc during the opening flashback, he touches his ear to answer the call, meaning he has a subcutaneous communicator. The biggest Star Trek precedent for having a communication device under the skin comes from the TOS episode "Patterns of Force," where Spock and Kirk have transponders injected into their arms. Picard’s subcutaneous communicator has both the doorbell sound effect from TNG and the classic combadge cricket sound effect.

12. Number One is back behind the camera: Deal with it

The director of "Absolute Candor" is Jonathan Frakes who played William T. Riker in TNG, four feature films, one episode each of Voyager, Enterprise, and (kinda) Deep Space Nine. Frakes is also equally famous as a Trek director, having directed the films First Contact, Insurrection and a handful of episodes in the first two seasons of Discovery, including the rowdy episode where that crew entered the Mirror Universe.

"Absolute Candor" is the first time Frakes has directed Patrick Stewart since 1998's Insurrection. We know Frakes will appear as Riker in front of the camera, later in the season, but not in this episode.

When Jurati complains about how empty space is, she mentions “three billion stars in our galaxy alone." Her monologue her slightly echoes a similar speech from Dr. "Bones" McCoy in the classic TOS episode “Balance of Terror.” Funnily enough, "Balance of Terror" is referenced visually in a huge way later, as we'll see.

In terms of holographic recreation, all Rios has on the ship is "Klingon opera." He says this is a long story. Klingon opera is referenced throughout The Next Generation, Enterprise, Voyager and Deep Space Nine, and though we've heard Worf and another sing a little bit of Klingon opera, we've never actually seen anyone attend a Klingon opera.

Rios says that the book The Tragic Sense of Life is about “the existential pain of living with the conciseness of death, and how it defines us as human beings." In the TNG episode "Time's Arrow," Data discovers that at some future point in time he will die, which he finds comforting. He tells Geordi the knowledge of his own death actually makes him feel more human.

Picard gets a holographic version of his study onboard the Le Sirena. This is the first time we've seen a working holodeck onboard of Star Trek starship since the film First Contact and the series Voyager. It also seems like this holodeck (called "holomatrix" here) is a little better and more accurate than the versions we've seen in the past.

When Jean-Luc is in his holographic study and people ring the doorbell, he responds "Come!" in the exact same way he did when people wanted to talk to him in his Ready Room in TNG.

Famously, on TNG, Picard was the Star Trek captain who often got all the angles from his crew before making big decisions. Back on the Enterprise, this would usually happen in the observation lounge, and Picard would ask the TNG crew the same question he asks in this episode: "Suggestions?”

For some reason the Borg cube has a bar, so we get to see Soji and Narek drinking some blue Romulan booze. This is clearly Romulan ale — famous Trek booze first mentioned in Wrath of Khan. Bones gave Kirk a bottle of Romulan Ale for his birthday, and that style of bottle is sitting on the table between Soji and Narek.

Elnor mentions that in Picard's stories that Data had "an orange cat named Spot." In TNG, Spot appeared in multiple episodes starting with "Data's Day," which was framed as a diary entry to Bruce Maddox. At first, Spot was a long-haired Somali cat, then an Abyssinian cat, and later, a common tabby cat. Spot also changed genders randomly toward the end of TNG, survived the crash of the Enterprise-D in Generations and, outlived Data in Nemesis.

Narek mentions that Soji supposedly commuted to the Artifact on a spaceship called the Ellison. (He also mentions she wasn't on that passenger manifest, which is fishy.) But the Ellison is possibly a reference to the writer Harlan Ellison, a famously cantankerous science fiction writer who wrote the mega-famous TOS Trek episode, "The City on the Edge of Forever." Ellison also collaborated with Picard showrunner Michael Chabon in 2003 for the short story anthology, McSweeney's Mammoth Treasury of Thrilling Tales.

Despite being a super-famous Trek starship design, the classic 1966 Romulan Bird-of-Prey that appears in "Absolute Candor" has only appeared onscreen in two Star Treks prior to this, and one of those was a retcon.

If you don't count the 2008 "Remastered" versions of TOS, this would technically only be the second time we've seen the OG Romulan Bird-of-Prey on screen; the first time being the classic episode "Balance of Terror." If you were to watch the 1969 episode "The Enterprise Incident" on Netflix right now, you'd also see this ship, but that was digitally added back in 2008.

The appearance of the old-school Bird-of-Prey is significant in another way: Right now, it is the only starship design from the original series that hasn't been redesigned in some way for an appearance in 21st Century Star Trek. (Even the '60s Enterprise was subtly redesigned for Discovery.) In fact, the only thing different about this Bird-of-Prey and the one from "Balance of Terror," is a slightly darker paint job.

"Absolute Candor" ends with Seven of Nine getting beamed aboard the Le Sirena. In case you missed the '90s, Seven of Nine (Jeri Ryan) was an ex-Borg who joined the crew of Voyager. We've never seen Picard meet any Voyager crewmembers except Captain Janeway (Kate Mulgrew), who appeared as an admiral in Nemesis. Janeway was Seven's Captain, so it's possible they met that way.

Like Picard himself, Seven of Nine is also a former Borg Drone, which is probably the most relevant connection between them. In Voyager she was also a pretty good pilot, a fact which is repeated here before her new tiny spaceship is destroyed.