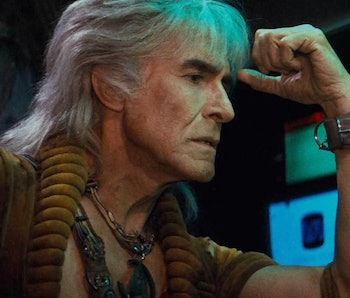 Genetically engineered villain Khan is rumored to be returning to avenge himself upon the final frontier. According to some unverified sources, the classic Star Trek baddie will be the focus of a new miniseries helmed by the man who made Khan famous, writer-director, Nicholas Meyer.

When contacted via e-mail on Monday, Meyer told Inverse “I Khannot possibly comment.”

The source of the rumor began on Sunday, when Geek Exchange claimed two sources confirmed that Meyer’s secret Star Trek project is in fact a miniseries about Khan. Presumably, this would chronicle what Khan was doing in his exile on Ceti Alpha V before Chekov accidentally showed-up and got bugs crammed in his ear in The Wrath of Khan.

A prequel all about Khan is nothing new. After his first appearance in the 1966 classic Trek episode “Space Seed” — written Gene L. Coon and Carey Wibler — Khan returned in the 1982 feature film The Wrath of Khan, written and directed by Meyer. Since then, Khan’s backstory has been explored in three novels written by Greg Cox, collectively titled The Rise and Fall of Khan Noonien Singh. IDW comics also explored Khan’s years of exile in the 2011 miniseries Ruling in Hell. And of course, some fans might count Benedict Cumberbatch’s portrayal of Khan in 2013’s Star Trek Into Darkness as a prequel of sorts, too.

While Meyer’s cheeky non-response could be read as sly confirmation, for now, Trekkies should probably assume the Khan series isn’t happening until CBS or Paramount makes some kind of official statement.

Meyer is part of the Star Trek: Discovery writing staff, which debuts on September 24 on CBS All-Access.

More like this
Entertainment
Jan. 30, 2023
The Last of Us Episode 3 Features One Subtle Video Game Easter Egg
By Alex Welch
Culture
Jan. 25, 2023
30 years later, Star Trek is about to pay off a massive villain comeback
By Ryan Britt
Culture
Jan. 18, 2023
Your science fiction education begins with Babylon 5
By Ryan Britt
LEARN SOMETHING NEW EVERY DAY.
Share: