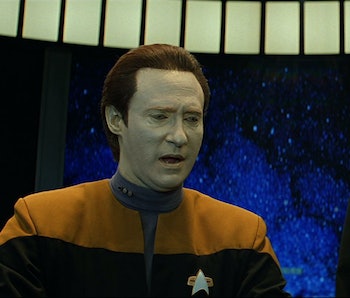 When Star Trek: Lower Decks launches in August 2020, it will do something a Trek series has never attempted: deliberately explore the lighter side of the final frontier. At the same time, Lower Decks will also establish some brand-new Trek canon. It may be a comedy, but it's not a spoof. It takes place in 2380, right after Nemesis, which has made a lot of fans wonder about what seems to be yet another new uniform style. If Lower Decks takes place between Nemesis and Picard, what's up with these inconsistent uniforms?

The answer is this: The uniforms aren't inconsistent, but rather a direct reference to Next Generation-era uniforms that almost became the standard back in 1994. Let's dig in.

Mild spoilers ahead for Star Trek Generations, Picard, and Discovery.

The uniforms in Star Trek change a lot. Imagine the Navy radically changing uniform styles every 10 years or so. Granted, that happens to some degree, but in Starfleet, bright colors are involved. The franchise encompasses the 22nd century to some point in the 29th century, so some degree of fashion evolution is to be expected. What's more, even if the uniforms change radically, there tends to be an off-screen explanation for it.

When Star Trek: Discovery debuted in 2017, some fans were confused (or upset) by a new style of 2250s uniform that seemed to overwrite the established style from the TOS episode "The Cage." This "mistake" was explained in the tie-in Discovery novel Desperate Hours, and outright addressed in the Season 2 debut of Discovery in which Captain Pike wore a uniform similar to the old-style TOS clothes, and in several scenes, the two types of uniform styles were seen existing side-by-side. So, what's up with the Lower Decks uniforms?

So, Lower Decks takes place in 2380, one year after Nemesis and about five years before the first flashbacks in Star Trek: Picard. In the 2370s, Starfleet uniforms were mostly the grey-shouldered variety worn in the TNG movies after First Contact and the later seasons of Deep Space Nine. In theory, uniforms in 2380 should correspond to that era, which means some fans think the Lower Decks crew should look like this:

But, as we know, the uniforms in Lower Decks actually look like this:

Rght now, it seems like Starfleet changed its standard uniforms right after 2379, but then changed them again in 2385. Let's see how that adds up.

Most of the regular characters in Picard don't wear Starfleet uniforms week-to-week, but the series ntroduced two new types of Starfleet uniforms and featured four unique styles overall. In various dreams and flashbacks, we see Picard and Data in the TNG season 3 style uniforms (2366) and the previously mentioned grey-shouldered TNG movie-era uniforms (2373).

The two new types of uniforms in Picard were the flashback uniforms circa the evacuation of Romulus (2385) and the "present-day" Starfleet uniforms, worn by Captain Riker, Commodore Oh, and others (2399).

This doesn't mean there's a canon error in Lower Decks. But the 2385 Picard uniforms (which are different from the Lower Decks uniforms) does raise the possibility that there were three different uniform styles overlapping between 2379 and the early 2380s.

Back in August 2019, Lower Decks creator Mike McMahan commented on the possible uniform contradictions between Lower Decks and Picard. As reported by TrekMovie:

"There is a lot of stuff going on with Picard. Picard is doing a lot. What I’ll say is, if you are on a California-class ship in the year 2380, you better be wearing that uniform."

Other than stories that feature multiple flashbacks (like Picard Season 1) there are other precedents for various Starfleet uniform types coexisting at the same time, and sometimes in the same scene.

Starting with The Wrath of Khan, the classic Star Trek films established a very different uniform style worn by cadets and the "regular" uniform worn by officers. This distinction continued throughout TNG, and even in one flash-forward in Discovery Season 2. Similarly, in The Original Series, each individual starship had its own "assignment patch," which means the famous Starfleet "badges" were different and sometimes very funky depending on one's ship.

Finally, the most famous example of mixed uniforms comes from the film Star Trek Generations (2371) in which the iconic TNG-style uniforms were worn side-by-side with the Deep Space Nine, mostly all-black uniforms which existed at the same time. Prior to Generations, most fans inferred the DS9 uniforms were only worn on space stations, while the TNG uniforms were worn on starships. But, Generations proved this wasn't true. Picard, Riker, Data, Worf, and Geordi all wear both kinds of uniforms throughout the film at different times.

On top of all the various precedents that explain the "new" uniform styles in Lower Decks, the truth is, this specific design is actually very old. If you bought Star Trek action figures in 1994, the year Generations was in theaters, you might remember a very strange aberration. In that year, the uniforms worn by the action figures of the Enterprise crew did not match those of the film. In fact, those uniforms didn't match anything we'd seen on screen, ever. That is, until now.

In 1994, TNG costume designer Robert Blackman was asked to redesign the TNG uniforms for Generations, merging the classic TOS movie-era look with that of TNG. At the last minute, just before shooting, the filmmakers chose to abandon these uniforms in favor of using the existing uniforms from TNG and DS9. Nobody bothered to tell toy-maker Playmates, so a bunch of action figures were made with anachronistic uniforms. Check out the vintage toy commercial below:

The similarity between the Lower Decks uniforms and the unused Generations uniforms isn't a fluke. It is a calculated Easter egg, that was specifically chosen by McMahan. As TrekMovie reported in 2019, the showrunner directly acknowledged this influence.

"There were designs that weren’t used for Generations and there were kind of like designs that were used across all the series and we wanted to do something that felt like if you saw somebody cosplaying it, you would immediately be like “that’s TNG and that has to be the animated show,” but it doesn’t not look Starfleet. I also just love that flap."

That's that. The Lower Decks Starfleet uniforms don't violate canon. They are a not-so-secret Easter egg that references a slick, unused uniform style from 1994. On top of that, because of where Lower Decks happens in the timeline, and the fact that it will likely make more than a few jokes about Star Trek canon, there's every reason to believe that some kind of comment on the uniforms themselves will be made in the show. If Discovery can crack a joke about the "colorful" new uniforms, then it seems only logical that Lower Decks might have a field day on the same topic.