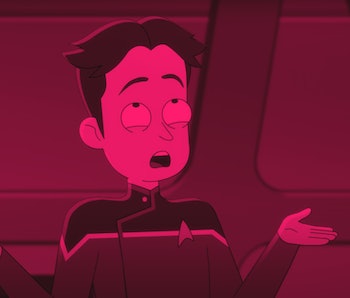 Star Trek: Lower Decks may bring back a familiar, if somewhat obscure face for fans of The Next Generation. Remember Lt. Sam Lavelle from the episode "Lower Decks?" Well, it looks like he's been reborn as Ensign Brad Boimler in the newest series, Star Trek: Lower Decks. Confused? Surprised? Here's what's going on.

In the vast Star Trek canon, most stories focus on huge decisions affecting entire planets, galaxies, or even parallel dimensions. Every once in a while, Trek delivers small-stakes stories or focuses on people we might consider to be part of "B-Squad." The entire premise of Star Trek: Lower Decks is the latter — what happens in the day-to-day lives of self-described "scrappy underdogs." The first full trailer for this animated Trek series finds four hapless ensigns making mistakes with phasers, goofing-off with a "blast shield" on a shuttlecraft, and doing the non-glamorous work of cleaning up the holodeck. And in all of that, there's one character with a direct link to The Next Generation episode from which Lower Decks get its name.

In the trailer, we meet an eager-to-please young man named Ensign Brad Boimler (Jack Quaid). He gets caught pretending to do a "Captain's Log" and is mercilessly mocked by another ensign, Beckett Mariner (Tawny Newsome). Later, we get the sense that Boimler desperately wants to get a promotion, and is even considering a different hairstyle to make it happen. All of this is hilarious stuff, but what's really fun is that Brad's behavior is taken directly from the TNG episode "Lower Decks," specifically the character of Lt. Sam Lavelle. Sam is also super desperate to get a promotion and is even crossing his fingers and closing his eyes while wishing for it out loud.

If you watch the TNG episode alongside the Lower Decks trailer, it's impossible not to see that the uneasy desperation of Sam has been transferred to Brad. In the episode "Lower Decks," Sam comes across as a Commander Riker wannabe, in the series Lower Decks Brad comes across as a wannabe Captain Kirk. This stuff is funny, but it's also interesting because it might suggest that the new show isn't only going to be a comedy. Sam's journey in the episode "Lower Decks," is mostly tragic. He's an unlikeable guy who eventually gets the promotion he wants, but we're made to think that's only because another (super-likable) character, Ensign Sito, is killed in action. Basically, "Lower Decks" the episode isn't a comedy, even if the concept starts off as a light-hearted romp about junior officers worrying about getting promoted onboard the Enterprise.

As a series, Lower Decks has taken that basic concept as a jumping-off point. We already know the show (probably) won't have the same level of earnestness as the original episode, and in some ways, the fact that Brad is a direct analog for Sam is the proof. Of all the characters in the original episode, Sam's goals and concerns were the pettiest. He's only really concerned with climbing the ladder, and less concerned with his friends and the crew as a whole. Will Brad be as selfish in Lower Decks as Sam?

Other than the overall concept of Lower Decks, the biggest character question in the trailer seems to be about Brad. Basically, can slightly pathetic, careerist egomaniac be a likable character? And, in the context of Star Trek, how does that character grow or change to become a slightly better person? When it comes to underdogs, the Trek franchise tends to go against stereotypes as much as possible. In The Next Generation, another "loveable loser," Lt. Barclay (Dwight Schultz) was the butt of plenty of jokes, but, ended-up saving the ship on more that one occasion, and also, at least in one episode ("The Nth Degree") briefly took over the Enterprise. In Discovery, Cadet Slyvia Tilly (Mary Wiseman) was presented as a nervous wreck with an over-achieving streak that made it seem like she'd end up making a bunch of mistakes. But, in Season 1, we learned that in the Mirror Universe all of that nervous energy translated into Tilly being the captain of the ship, and in Season 2, Tilly was instrumental to saving the Discovery at the beginning of the season, and the end.

It's unclear which of these molds Brad will fall into. On the one hand, he does seem like a lamer version of Sam Lavelle from "Lower Decks" in TNG. But, it's possible his character could change and grow kind of like Tilly or Barcarly did. Star Trek is all about attacking stereotypes after all, even if those stereotypes are focused on unlikable dudes who are desperate for attention. Lower Decks will certainly show Brad getting what he deserves in a way that "Lower Decks' the episode failed to do with Sam. That said, there might be more to this character than meets the eye. Either way, right out of the gate, Star Trek: Lower Decks is already way more layered and referential to the rest of Trek than we even could have imagined.