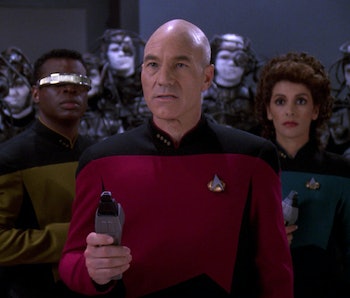 In the debut episode of Season 3, Burnham tried to sell her 23rd-century tricorder as a valuable antique. In Episode 6, "Scavengers," another Starfleet antique briefly surfaces, linking the year 3188 to the 2300s of The Next Generation. This Easter egg seems to gesture toward much larger plot development. Right now, we assume that Saru, Tilly, Georgiou, and the rest of the DISCO gang are still fairly new to the 32nd Century, but what if someone else — who isn't Burnham — has a bunch of information about the 24th and 25th century?

This Easter egg involving a TNG-era phaser could point to secret hiding in plain sight.

Spoilers ahead for Star Trek: Discovery Season 3 through Episode 6, "Scavengers."

"Scavengers" is mostly about Burnham and Georgiou trying to rescue Book from a forced-labor planet run by the mysterious, unseen villain known as "Osiria." To that end, Georgiou pretends like she's a customer looking to purchase various starship parts. As part of this act, Georgiou tells the Orion lackey that she's looking for merchandise that is "pre-2400s," meaning the TNG, Voyager, Deep Space Nine, and Picard eras. At one point, the Orion shows her a TNG Starfleet phaser, indicating that he has some merchandise from the "pre-2400s."

"Please. Half of those parts didn't even exist in that era."

WHO'S YOUR FAVORITE NEW TV CHARACTER IN 2020? TAKE THE INVERSE FAN-FAVORITES SURVEY!

She's half-right. A TNG-era Starfleet phaser is pre-2400s, but only barely. If this guy was trying to show her something from the 23rd Century, he failed. We first saw that style of phaser, and its variants in TNG Season 3, which is 2366. By 2373, a similar phaser style with a more curved handle was introduced in Star Trek: First Contact. By the Picard era, it appears that specific style of phaser wasn't being used anymore.

But here's the thing: How did Georgiou recognize the phaser being held by the Orion in the first place? How was she able to roughly date it just by looking at it? In either the Mirror Universe or the Prime Universe, Georgiou's knowledge of technology is based in 23rd Century tech. So, if she recognized a 24th Century phaser, what does that mean? There are really only two answers.

1. Georgiou was bluffing — Since Georgiou was acting like she knew what was going on — but actually didn't — it's reasonable to say she didn't recognize the phaser. In theory, this means she was wrong. The phaser is pre-2400s, but not by much. So she was lucky to be able to fool the Orion. This explanation works, but it's also not as fun as the second explanation.

2. Georgiou has time-traveled to the 24th Century— If Georgiou wasn't bluffing, and she did recognize 24th Century tech, that suggests she's had some kind of experience with time travel prior to this episode. We don't know exactly how much time passed between Episode 5 and Episode 6 — Saru mentions the Discovery's refit has taken three weeks — but it's possible that Georgiou got mixed-up with some kind of timey-wimey scheme involving David Cronenberg's mysterious character. In this episode, Georgiou exhibits some trauma that seems to provide clues to something that happened to her in the Mirror Universe prior to Season 1.

So what if there's more to her backstory than we know? In Season 2, Georgiou had been working for Section 31 for long enough to infiltrate the Klingon Homeworld. Section 31 certainly had access to time travel technology, in fact, the entire premise of Season 2 centered around trying to get some of that time travel tech back.

But that's the tricky thing with time travel. If Georgiou has traveled through time prior to going through the wormhole that took the crew to the 32nd Century, then really she could have done it at any point between the end of Season 1 and the end of Season 2. Right now, we could be looking at a version of Georgiou who has hopped dimensions far more than we think. We were told that 3188 is her "second universe" and "third timeline," but what seems possible now is that the number of timelines and universes she's experienced could be much, much higher.