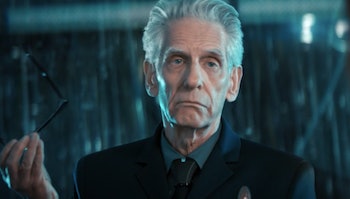 Spoilers for Star Trek: Discovery Season 3 through episode 5 ahead.

Cronenberg doesn't get much screen time, but the dialogue he has with Georgiou (Michelle Yeoh) speaks volumes about several plot elements that could be set in motion for Discovery Season 3, and potentially the in-development Section 31 series, too. Here are the big takeaways.

Who is David Cronenberg?

Cronenberg is a filmmaker most famous to sci-fi and fantasy fans for his films The Fly and Scanners. In The Fly, Jeff Goldblum was transformed into a Gregor Samsa-style monster. Cronenberg is also noted for directing Crash, A History of Violence, and several other films. It's hard to sum-up his oeuvre quickly, but one way might be to say this: Cronenberg tends to make movies that are both artful and make people feel uncomfortable, too.

Okay, what does that have to do with Discovery?

We don't know yet. But, considering Cronenberg's films, it makes a certain amount of twisted sense that he's paired with Georgiou, and they specifically talk about Star Trek's wicked dark side, the infamous Mirror Universe. First introduced in the classic episode "Mirror, Mirror," Discovery most recently entered the Mirror Universe in Season 1, in which the Terran Emperor, Philippa Georgiou, reigned supreme. Since Season 2, Georgiou has been confined to "our" universe, but as this new scene with Cronenberg indicates, she still seems to care about what happens in her original dimension.

Is Cronenberg from Section 31?

In the scenes with Georgiou, this mysterious man indicates he knows a lot about Terran History, that is, the alternate history of the "good" Federaiton Universe we're used to. He mentions that "April 5 is my birthday." In the Prime Universe, this refers to "First Contact Day" when humans first met Vulcans. But, in the prequel series Star Trek: Enterprise, we learned that on April 5, 2063, in the Mirror Universe, humans killed the first Vulcans who landed on Earth. Georgiou and Cronenberg's characters talk about these past events as though they are talking about the weather.

The larger question though is, how does this guy know about the Mirror Universe and Terrans unless he's from Section 31? Within Starfleet, Section 31 is the clandestine black ops group that essentially knows about everything "regular" Starfleet members don't. This, naturally, includes the Mirror Universe, which was classified during Discovery's day, though, after The Original Series, and Deep Space Nine, more widely known.

If Cronenberg's character is part of Section 31, and his debrief of Georgiou was designed to rattle her, all of this could be a complex set-up for Michelle Yeoh's departure from Discovery. We know the Section 31 spin-off is happening IRL, but we don't know how or where it takes place. Could Georgiou be leaving the status quo of Discovery? At the end of Episode 5, Georgiou seems to be staring off into space, totally unaware Michael Burnham is even there. Prior to this Cronenberg was grilling Georgiou about the fact that the Terran Empire had died out "centuries ago" while the Federation "endures." He also points out that there hasn't been a "crossing in 500 years."

Basically, the message this new character delivers to Georgiou is clear: Going back to the Mirror Universe might not be possible anymore. The question now is, will she try to do it anyway?