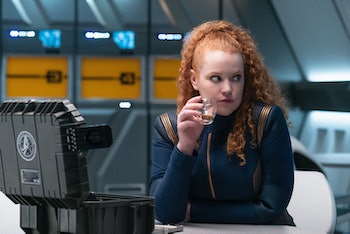 Since its 2017 debut, Star Trek: Discovery has had one secret weapon. No, it's not the Spore Drive or the ability to travel in time, but the quirky honesty of Ensign Sylvia Tilly, the most relatable person in Starfleet. Since Season 1, Mary Wiseman has played Tilly like the audience's best friend, first by declaring herself Michael Burnham's (Sonequa Martin-Green) friend, even when Burnham was an outcast.

But things have changed quite a bit since Season 1. Tilly has impersonated her own evil doppelgänger in the Mirror Universe, wrangled asteroids, and banished a trans-dimensional alien ghost. Season 3 of Discovery finds Tilly trying to figure who she is in the new Final Frontier, nearly a thousand years from home. In the second episode of the season — "Far From Home" — Commander Saru takes her with him on a dangerous away mission, assuring her she is "an excellent first impression" of what Starfleet is all about.

Ahead of the episode's debut on CBS All Access, Wiseman talked to Inverse about Tilly's evolution, what she thinks of internet trolls, and how Tilly could still become a captain.

It's tempting to assume the wisecracking, fast-talking Tilly and Mary Wiseman are one and the same. But when you listen to Wiseman, it's clear that wasn't exactly true in the past, but it might be getting nearer to the truth now.

"This season feels a little closer to me," Wiseman says of Tilly's growth. "It’s a place I’ve been anxious for Tilly to go. In Season 1 she was so green and so inexperienced. I don’t think she had a very strong sense of self. The writers and showrunners have really kept me on my toes in terms of where she is going. She gains a kind of wisdom and self-assurance that I have been very eager to develop. Now, she’s really coming into her own."

Part of what makes Tilly such a unique character for the Trek franchise is that although she's an intelligent youngster, she's not a precocious know-it-all in the mold of Wesley Crusher. Tilly might make a fool of herself by blurting out the wrong thing — or in the latest episode, telling aggressive dudes with phasers that "my name lacks authority." But she's not the butt of a joke.

"There’s not a lot of characters in the history of Trek who are as innocent or vulnerable as her. She’s not cool and she’s not slick," Wiseman explains."She is goofy, but she’s not the fall guy. She’s well-respected by her peers and well-loved. There’s not been a female character [in Trek] who is so uncool and quirky. That feels contemporary to me— to have female characters who are not perfect."

The season premiere established the concept that space travel is rowdier in the 32nd century, and Tilly will be pushed into more physical situations this time around. In the latest episode, Saru and Tilly are held at phaser-point by aggressive couriers intent on exploiting the crashed USS Discovery for resources. So how can Tilly and Saru hold to their Starfleet ideals when everyone around them acts like outer space gunslingers?

Wiseman says this episode really made reconsider how body positivity works in the supposedly enlightened future of Star Trek:

"It’s complicated for me, the action part of the series. I know there is a contingent of trolls out there on Reddit and Twitter who question whether or not Tilly could be a member of Starfleet because how could someone in my body pass the physical requirements of Starfleet Academy? I’m not the most athletic specimen, but I’m not super interested in that. I have value regardless of that.

"Maybe Tilly’s great gift is that she has some out-of-the-box thinking and she knows exactly the right moment to break this bottle over this guy’s head, because he’s not focused on her. There are other skills people can bring to the table when they’re in conflict. Nobody is questioning Scotty’s ability to be on a ship regardless of his size!"

Tilly doesn't kick anyone in the face in this episode like Michelle Yeoh's Georgiou, but she does break a bottle over somebody because people assume she's a nice, sweet person. And while she might not be the most aggressive crewmember of the USS Discovery, she is the most ambitious. In their first meeting, she told Burnham she wanted to be a captain someday. Later, in the Mirror Universe, an alternate ruthless version of Tilly — nicknamed "Killy" — was the Captain of the ISS Discovery. Does Tilly harbor some of the darkness of her counterpart from that alternate dimension?

"Not all people who are ambitious are dastardly!" Wiseman says with a laugh. "But the biggest thing that Killy and Tilly have in common is sheer ambition. Tilly is very clear about that from the outset; she wants to be a Captain. Tilly is able to pursue that dream while still taking care of everyone around her. But she does have a short temper, and you might see more of that this year."

Although Season 3 of Star Trek: Discovery has just started for fans, Wiseman is on a slightly different timeline. Along with the rest of the cast, she's getting ready to film Season 4 in Toronto in just a few weeks.

"My quarantine just ended. It’s happening," she says, but vows not to give up any spoilers. Will Tilly ever become a Starfleet captain? Wiseman isn't telling. But she does think her character is still headed that way.

More like this
Culture
Feb. 2, 2023
Buck Rogers in the 25th Century’s Most Baffling Change Also Gave Us Its Best Character
By Ryan Britt
Entertainment
Jan. 30, 2023
'The Last of Us' Episode 3 Director Reveals the Secret Meaning Behind the Last Shot
By Dais Johnston
Entertainment
Jan. 23, 2023
Last of Us star Anna Torv unpacks Tess’ tragic moment: “Life had a different plan”
By Dais Johnston
LEARN SOMETHING NEW EVERY DAY.
Related Tags
Share: