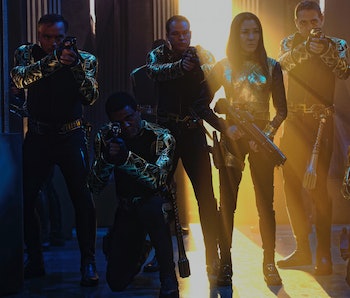 In the Mirror Universe of Star Trek, humans aren’t called humans. They’re called “Terrans.” The word “Terran” comes from the root Latin word “terra,” meaning “dry earth,” which is where we get the phrase “terra firma.” But the word “Terran” has been prevalent in science fiction long before it cropped up again on Star Trek: Discovery in 2018. As it turns out “Terran” has a long history of being a dirty word for “human.”

No Spoilers for Star Trek: Discovery ahead.

On Wednesday, Inverse contacted author and dictionary expert Kory Stamper to discuss the connations of the word “Terran.” Stamper is an associate editor at Merriam-Webster and has previously helped us understand what the heck was going on with the plural and singular uses of the word “Jedi”. And as she explains, “Terran” is often used pejoratively towards human beings in science fiction narratives. But in terms of usage, Discovery’s evil Terran Empire hasn’t changed the definition of “Terran” to now mean “Evil Human.”

“I don’t see much change in general use of ‘Terran’ to specifically mean ‘evil human,’ but it’s early yet. It takes a while for pop culture to seep deeper into the language,” Stamper said. “That said, when ‘Terran’ is used in sci-fi, it is used to “other” humans, and so it does tend to show up in contexts that are either neutral or negative to some degree.”

To elucidate her point, Stamper cites a passage from a short story called “Sand and Iron” by Michael F. Flynn published in Analog Science Fiction & Fact in 2008.

“If them ain’t diamonds, what are they?” O’Toole rolled his eyes. As if a Terran would know!

This single short story isn’t the only example of “Terran” in science fiction. From Robert A. Heinlein’s Starship Troopers, to StarCraft and beyond, the word “Terran” often represents a way to think of humans as, well, aliens from another point of view. Stamper thinks this makes sense. “One of the primary themes in sci-fi, from even the very earliest stories, is to show the hubris of humanity,” she says. “Humans in these stories think they are the apex of life, reasoning, technology, and so on.”

So, from an etymological perspective, the Terrans in the Terran Empire are perfectly named; a collection of humans who have lost touch with what it means to be human.

Star Trek: Discovery continues to explore the ins-and-outs of the Terran Empire in its 13th episode, “What’s Past is Prologue,” airing this Sunday, January 28 at 8:30 eastern time on CBS All-Access. After the episode, come back to Inverse on Sunday night for all our coverage, including an interview with Jason Isaacs. Here’s a clip from the episode to get you fired up.

More like this
Entertainment
8.10.2022 11:00 AM
The one reason Dune: Part 2 will be so radically different than Dune: Part 1
By Ryan Britt
Entertainment
8.4.2022 12:00 PM
How sci-fi writer Blake Crouch turned gene-editing tech into a Spielbergian epic
By Jeff Spry
Entertainment
8.9.2022 1:00 PM
Has your favorite HBO Max show been canceled? The fate of 9 sci-fi series revealed
By Robin Bea
Related Tags
Share: