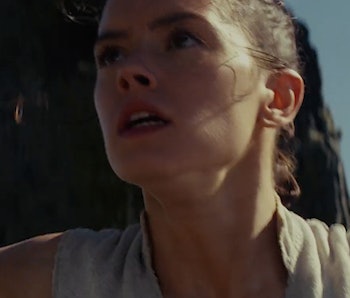 In exactly two months, Star Wars: Episode VIII, The Last Jedi will hopefully answer fans’ burning questions about Rey’s parents, Kylo Ren’s loyalties, Luke Skywalker’s grumpiness, and Poe and Finn’s bromance. But the biggest question of all is hiding in plain sight. What the heck does the title mean, just who is the last Jedi? Or are there more than one?

On Wednesday, Inverse got in touch with Kory Stamper, an editor at Merriam-Webster and author of the book Word By Word: The Secret Life of Dictionaries. We asked her a little bit more about the plural/singular nature of the word “Jedi,” particularly when it gets translated into other languages.

For example, the French translation of The Last Jedi is “Les Derniers Jedi,” which Stamper looks at and says “Yup, that’s plural.” Because “Jedi” is technically an English word, we can consider it to be a zero plural, which means it exists as both a plural and singular word at the same time. But, across the board, Stamper says that most non-English translators seem to have opted for the plural version of the word “Jedi.”

“Those titles would have been translated when the film’s release was announced,” Stamper explains. “So…someone made it clear they should all be plural.”

Stamper is also quick to point out that several languages — such as French — assign grammatical genders to words. “And the fact that ‘Les Derniers Jedi’ is grammatically masculine doesn’t mean anything here,” she says. “It’s just that French has to assign a grammatical gender to nouns, and they ended up making “Jedi” masculine.” Meaning, if you know anyone who has a wacked-out theory that Rey can’t be the last Jedi because the French translation has made “Jedi” masculine, you can now correct them with impunity.

Based on Stamper’s assessment, both Rey and Luke could, in fact, be the titular “last Jedi.” But, based on comments from director Rian Johnson, “last” in Last Jedi means “final,” which seems to suggest Luke Skywalker. After all, as fans are delighted to point out, the text crawl for The Force Awakens called Luke Skywalker, “the last Jedi.” Plus, in September, Johnson also just straight-up said, “Luke Skywalker, right now, is the last Jedi,” but added that there is “always wiggle room in these movies.”

So, if the vast majority of translators have decided to make Jedi plural, then that “wiggle room,” might be decided by semantics, rather than lightsaber duels.

The Last Jedi — however many of them exist — will hit theaters on December 15.

If you liked this article, check out this video about the two huge twists revealed in The Last Jedi trailer.