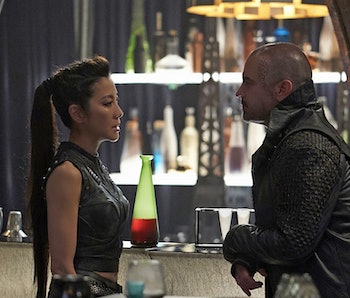 By the end of 2020, Trekkies will have gotten three distinct Star Trek series: Picard, Lower Decks, and Discovery Season 3. It's unclear if the Covid-19 pandemic will allow any new Trek shows to be completed for a 2021 release, but if Strange New Worlds films in early 2021, it's feasible it could come out next year. Plus, we know most of Picard Season 2 is already written.

But the one Trek spin-off that hasn't been mentioned in a while is the Michelle Yeoh spin-off, Section 31, which presumably focuses on Georgiou working for Section 31 after the events of Discovery Season 3. Recently, Star Trek producer Alex Kurtzman dropped a few hints about the setting of Section 31, and it sounds like this Trek series won't actually be what anyone expected. Here's what Kurtzman hinted at and what it might mean.

As reported by TrekMovie, during a Variety Streaming Room Q&A, Alex Kurtzman dropped a huge hint about the Section 31 show. Here's what he said:

"I’m really excited about where it’s going. And I can’t wait to see Michelle in that part. And I think people are going to be very surprised about the world that it occupies. We’ve seen stuff online where people have guessed certain things, but some they are nowhere even near guessing. So that’s that’s pretty fun."

Obviously, the big scoop here is that Kurtzman is saying the setting of Section 31 will make Trekkies "surprised." So, what could that mean? For one thing, this almost certainly means that Georgiou (Yeoh) will not be staying in the 32nd Century by the end of Discovery Season 3. Either that or something in the Section 31 series will pull her into a different setting. But what could that mean? Here are some theories.

3. Section 31 could be a time travel show

Within Trek canon, Starfleet has something called The Department of Temporal Investigations. These are the people who show up after you go on a zany time travel mission and ask you a bunch of hard questions. In the Deep Space Nine episode "Trials and Tribble-alations," we met two people who worked for this department, and although they didn't say they had an affiliation with Section 31, they certainly acted like they had absolute authority. In the prequel series Enterprise, we met Daniels, a temporal agent from the 31st century who seemed to aligned with Starfleet and the Federation. Daniels also didn't say he was part of Section 31, but the idea of a temporal cold war — a war fought via time travel incursions — was something that Section 31 was worried about in Discovery, too. In fact, the entire plot of Discovery Season 2 revolves around the idea that Burnham's parents worked for Section 31 to develop time travel technology before the Klingons could.

Before he was possessed by the AI known as "Control," Captain Leland of Section 31 asserted the idea that technological leaps forward throughout history might have been the result of time paradoxes. And who was Leland working with the most during all of this? That's right, Georgiou. So, the last time Georgiou was working for Section 31 actively, she was working on time travel stuff. This means when she gets her own show, it might have multiple settings because Georgiou could be time-traveling every week.

2. Section 31 could be set on a contemporary version of Earth

What if Section 31 turns out to be the first version of Star Trek that doesn't take place in outer space? Because Section 31 has access to time travel, what if there are agents who actively live on Earth in the past of Star Trek's complicated canon? If true, Georgiou could exist in a kind of Star Trek version of Torchwood or The X-Files, where she fights for Federation interests, but covertly and in the distant past. This might sound strange, but there is a precedent for this kind of thing in the canon of The Original Series. In the episode "Assignment: Earth," Spock and Kirk meet a super-advanced human named Gary Seven, living in disguise on Earth in the 1960s. Gary Seven is aware that Kirk and Spock are from the future, and as such, tries to stop them from messing with the timeline. This episode sticks out in Trek canon because it's the earliest example of that supports the idea that the Trek timeline is being tinkered with all the time by various entities who possess advanced tech, and knowledge of future events.

Gary Seven did not work for Section 31. Well, at least as far as we know!

Perhaps the most obvious, and yet, compelling route this show could take is if Georgiou returned to the Mirror Universe in an attempt to regain the power she once had as Emperor of the Terran Empire. That said, by the 2260s in the Mirror Universe, the Terran Empire began reforms to become less tyrannical, and more peaceful. This is all because of the episode "Mirror, Mirror," where Kirk (Prime) encouraged Spock (Mirror) to try and look for peaceful solutions. In Deep Space Nine, about a hundred years later, we know that the peace movement within the Terran Empire eventually leads to Earth being overrun by other super-powers, including the Klingons and the Cardassians. But. What if Georgiou somehow finds herself in the middle of all of this?

In theory, because she'll travel to the 32nd Century in Discovery Season 2, Georgiou will have all kinds of advanced knowledge of the future of both the Prime Universe and the Mirror Universe. And if she returns to the Mirror Universe, perhaps she'll want to form her own version of Section 31. Then again, it's also possible that Section 31 exists in the Mirror Universe, too. And, they might not be too happy about the idea that humans won't rule the galaxy in the 24th century.

If Section 31 set an entire series in the Mirror Universe, it would allow for all kinds of interesting cameos. Perhaps most importantly, it might mean could see Ethan Peck with a beard again, but this time, with that evil Spock goatee.

Section 31 does not have a release date and has not started actual production. The next adventure for Georgiou (Michelle Yeoh) will be in Discovery Season 3, which debuts on October 15, 2020.