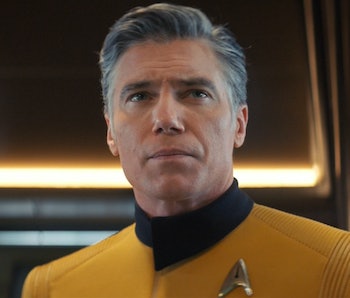 We're still a long way off from spin-off series Star Trek: Strange New Worlds. Even so, the 2020 San Diego 2020 Comic-Con panel indicates the series is a bit further along than we thought. Producer Alex Kurtzman revealed exactly what's happening with Strange New Worlds, giving us a pretty solid hint about when it could actually come out.

More importantly, Kurtzman revealed that "10 stories" for Strange New Worlds Season 1 have already been "broken." This means that at least 10 basic episodes have been mapped out, which hopefully means that when filming starts, things will move fairly quickly. Assuming Strange New Worlds will start filming fairly early on in 2021, it feels like we could reasonably expect Strange New Worlds by 2022.

Between now and then, there's still Discovery Season 3, Picard Season 2, and the debut of the Section 31 series to look forward to.

On top of that, at the end of the Star Trek: Discovery portion of the panel, Anson Mount, Ethan Peck, and Rebecca Romijn dropped a few hints about where their characters might end up in Strange New Worlds.

On Spock in Strange New Worlds: Peck said that Spock's relationship with his sister, Michael Burnham "gives him permission to be human," and that Burnham's love for the character "will dictate a lot of behavior for Spock." It seems Michael will be on his mind, even if the two aren't likely to cross paths again anytime soon.

On Captain Pike in Strange New Worlds: Anson Mount implied that Pike will be fighting off a few demons linked to the fact that he has knowledge of his own future. In Season 2, Pike's tragic fate in The Original Series was revealed to him via time-crystal, meaning, that Pike in Strange New Worlds will be living with the knowledge that's he's doomed. Mount said Pike is "maybe not thinking about things as a team," and that "there's a reason we can only see our past." Mount also said that Pike will "wrestle with how he can best utilize the rest of his life for the good of the world...the universe."

Rebecca Romijn also added that the series would be "a lot about surrendering to the unknown... together."

You can watch the entire Star Trek Universe SDCC 2020 panel below: