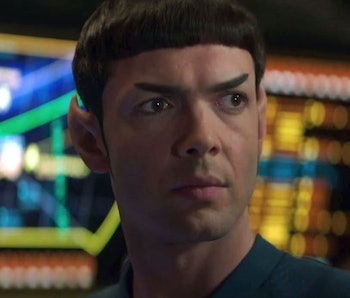 Boldly go! Of all the new Star Trek projects, Strange New Worlds probably has fans the most excited, if only because it seems poised to be the one series that feels the most like “regular Star Trek.” Just a few short years ago, it would be hard to imagine yet another Star Trek prequel whipping the fandom into a lather. And yet, Strange New Worlds is poised to really, truly, take the Trek franchise back to boldly going basics. Here’s everything we know so far.

As Discovery and Picard continue to chart a course into Trek’s future, one part of the Trek franchise is keeping a nostalgic boot firmly planted in its colorful past. Star Trek: Strange New Worlds is the next new series in this expanding universe, and it's swimming in nostalgia even though not a single legacy actor is involved with the project. Unlike Star Wars, Star Trek continues to boldly recast legacy characters. Here’s what that looks like for Strange New Worlds.

When is the Strange New Worlds release date?

Strange New Worlds Season 1 will hit Paramount+ May 5, 2022. Season 2 is already in production. It looks like each season will be 10 episodes long.

Is there a Strange New Worlds trailer?

There are several videos that are basically different kinds of Strange New Worlds trailers. The first proper video was released in 2021 and was called “Meet the Characters.” More recently, there’s been a teaser trailer that focused on Captain Pike riding a horse, and boundless outer space optimism, in a decidedly pointed pivot away from darker, grittier, Star Trek.

What is the plot of Star Trek: Strange New Worlds?

Star Trek: Strange New Worlds is a new ongoing TV series set in the 23rd century probably about 5 years before the classic show. It was announced on May 15, 2020, in a video message from Ethan Peck, Anson Mount, and Rebecca Romijn. The cast repeatedly suggested this project came into being because fans wanted it. The show will take place in established Star Trek continuity (Prime Timeline), but during a period that has not been extensively depicted.

Why is it called Strange New Worlds?

Space: the final frontier. These are the voyages of the starship Enterprise. Its five-year mission: to explore strange new worlds. To seek out new life and new civilizations. To boldly go where no man has gone before!

In subsequent versions of Star Trek, this narration was changed: in TNG the "five-year mission" became "continuing mission" and "where no man" became "where no one." It's a good bet that if there's an opening narration from Captain Pike in Strange New Worlds, that he will say "five-year-mission" and "where no one has gone before." In canon, this speech is considered to be the motto of Starfleet, and in the J.J. Abrams movie Star Trek Into Darkness (which featured a different Captain Pike) it was called "the captain's oath."

Where is Strange New Worlds in the Star Trek timeline?

Strange New Worlds is a sequel to Discovery Season 2, a sequel to Star Trek: Enterprise, and a prequel to The Original Series. Presumably, the show will chronicle a five-year mission commanded by Captain Pike from roughly 2258-ish to 2263-ish. For context, this is how it shakes out.

Trek canon has established that Pike commanded two consecutive five-year missions on the USS Enterprise NCC-1701 prior to Kirk taking command in 2265. (Though in some old canon this was 2264.) The events of "The Cage" on Talos IV happen before Discovery and Strange New Worlds, and the Short Treks episode "Q&A" happens before all of that. Pike’s temporary command of the USS Discovery in Discovery Season 2 was seemingly a blip in between back-to-back five-year missions on the Enterprise.

In theory, Strange New Worlds might have taken place between 2254 and 2257, which would then make it a prequel to Discovery and a weird midquel to "The Cage." However, Akiva Goldsman said the showrunners are not "hitting the reset button," on the characters, which confirms the series will take place after Discovery Season 2. So, 2258 or 2259 is a good bet. Goldsman also told the Hollywood Reporter in April 2021, that various aspects of the Strange New Worlds' aesthetic will be made to look like it matches up closer to The Original Series. This means that yes, the uniforms and the design of the Enterprise have changed again, slightly.

“It's a fine line because obviously we want to keep continuity with the storytelling and the style, but we also want Strange New Worlds to be a different show. It's not Discovery. There are a few more reach-backs (to The Original Series) and the uniforms have been adjusted slightly, the sets are slightly different. Remember the Enterprise existed as a little piece of [the show Discovery] but now its its own object. When you close your eyes and think of the key sets and situations that you think of The Original Series, that's what we're looking to do.”

Because Strange New Worlds is literally taking place so close to The Original Series, it will be an interesting dance to see how exactly Pike, Spock, and everybody else is dressed. Will Spock switch back to a gold shirt at some point? (He wears gold in “Where No Man Has Gone Before,” the second TOS pilot episode.)

Who is in the cast of Strange New Worlds?

Here’s the full regular cast of Strange New Worlds, all crew members of on the USS Enterprise NCC-1701:

As of March 2022, Paramount+ started rolling out 30-second videos that highlight different members of the crew. These videos have included insights into Uhura, La’an, Erica Ortegas, M’Benga, Chapel, and Hemmer. Each video (embedded above) feels like a miniature trailer!

Season 2 of Strange New Worlds will also feature Paul Wesley as James T. Kirk. (But we don’t know if he’s a Captain, yet.)

How does Strange New Worlds connect to Discovery and Short Treks?

The 2018 Season 1 finale of Discovery ended with the arrival of the USS Enterprise, though we didn't see anyone inside. 2019’s Season 2 re-introduced Pike, Spock, and Number One. Captain Pike was in every single episode of Discovery Season 2, the adult Spock started appearing from episode 7 onward, and Number One appeared in three episodes.

After that, Pike appeared in three Short Treks, "Q&A," "The Trouble With Edward," and "Ask Not." Number One and Spock only appeared in "Q&A" and at the very end of "Ask Not."

These versions of Pike, Spock, and Number One are the in-canon versions of the characters previously portrayed by Jeffrey Hunter (Pike), Leonard Nimoy (Spock), and Majel Barrett (Number One) in the TOS episodes "The Cage" and "The Menagerie." However, from a contemporary point of view, you could view Strange New Worlds as a direct spin-off of Discovery Season 2.

Who are the showrunners of Strange New Worlds?

We don't know all the directors of Strange New Worlds episodes, but Will Riker himself, Jonathan Frakes, has already said he can't wait to work with the cast:

"I’ve had great experiences with all three of them. Anson and I worked through finding Captain Pike. And Ethan and I worked through finding who Spock was. And the mantle of Spock, in particular, was so complicated and so emotionally taxing and was such huge shoes to fill, and Ethan felt it. Rebecca and I have a long relationship from back on The Librarians, and we have a fabulous working shorthand, so it will be great getting back to the floor with three old friends."

In addition to directing two Trek films in the '90s (First Contact and Insurrection) Frakes directed episodes of The Next Generation, Deep Space Nine, Voyager, Discovery, and Picard. He has also directed at least two episodes of Discovery Season 3.

How many episodes will be in Strange New Worlds Season 1?

How is Strange New Worlds different from other new Star Trek shows?

One of the biggest departures for Strange New Worlds will actually be a return of sorts. Since 2017, the various new Trek series have focused on heavily serialized seasons in which each episode must be watched in order to avoid being totally confused. Strange New Worlds is poised to return to stand-alone, episodic stories, a type of sci-fi storytelling that defined The Original Series and The Next Generation.

"We're going to try to harken back to some classical Trek values, to be optimistic, and to be more episodic," Akiva Goldsman told Variety in May 2020. "Our plots will be more closed-ended than you’ve seen in either Discovery or Picard. I imagine it to be closer to the original series than even DS9. We can really tell closed-ended stories. We can find ourselves in episodes that are tonally of a piece."

Something Goldsman pointed out while on the official Star Trek aftershow, The Ready Room, was that the subgenres of Discovery and Picard were somewhat fixed, while TOS and TNG could hop genres week-to-week. Goldsman labeled Discovery as "science fiction/action-adventure" and Picard as "science fiction/drama." Some episodes of TOS and TNG are outright comedies("Trouble With Tribbles," or "Q-Pid"), while others are murder mysteries with barely any science fiction elements at all ("The Conscience of the King," or "Suspicions").

This is all to say that modern Trek seasons scan more like 10-15 hour long single episodes, whereas Strange New Worlds will focus more on self-contained episodes.

In April 2021, Goldsman doubled down on the episodic, stand-alone aspect of Strange New Worlds telling the Hollywood Reporter: “It's unlike the other [new] shows in that it's really episodic...Strange New Worlds is very much adventure-of-the-week but with serialized character arcs.”

Where can I watch Strange New Worlds?

Strange New Worlds will stream on Parmount+ in the United States, on Crave in Canada, with a global rollout to be announced.