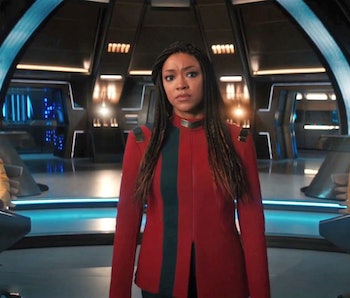 After an epic and upbeat Season 3, Star Trek: Discovery has lightly tapped the reset button again. Only this time, there's not a galaxy-wide mystery, the nostalgic appearance of a famous starship, or even a brand-new setting. After the Season 3 finale — "That Hope Is You Part 2," Season 4 of Discovery is poised to settle into the 32nd Century, and seemingly, get back to doing what Star Trek is famous for; a show about the crew of a space ship, having exciting adventures week after week.

Now that the crew of the USS Discovery has a new captain and a new (loosely defined) mission, what should DISCO fans expect for Season 4? The short answer is a lot.

The finale of Discovery Season 3 has opened up the series in a way that has never happened since it debuted in 2017. From the release date to the cast, to the directors and the writers, here's what to expect from Star Trek: Discovery Season 4. Let's fly!

When is the Star Trek: Discovery Season 4 release date?

Back on November 2, 2020, it was revealed that the cast and crew started filming Season 4 of Star Trek: Discovery. This means that despite the COVID-19 pandemic, Discovery Season 4 began filming roughly nine months after Season 3 wrapped in February 2020. As of April 5, 2021, it was been confirmed that Discovery Season 4 will debut sometime in 2021, though it’s not clear exactly when. Right now because Lower Decks Season 2 is set to hit in August 2021, Fall 2021 seems right for Discovery Season 4.

Is there a trailer for Star Trek: Discovery Season 4?

Yes! As of April 5, 2021, Paramount+ revealed a short teaser trailer for Discovery Season 4. It features new uniforms, a new mission for the USS Discovery, which seems centered on a large lightyear-spanning gravitational anomaly. Watch it above!

Who is writing Discovery Season 4?

Unlike previous seasons of Discovery, there appears to be little to no turnover within the creative team. As with Season 3, Michelle Paradise will be the showrunner for Season 4, with Alex Kurtzman serving as the executive producer. Much of the writing staff is thought to be the same, which will probably include Kirsten Beyer, Bo Yeon Kim, Erika Lippoldt, and Kalinda Vazquez, among other fan favorites.

Who is directing Discovery Season 4?

As with all previous seasons of Discovery, both Johnathan Frakes and Olatunde Osunsanmi are expected to return to direct episodes. Sadly, Picard and long-time Discovery director Hanelle Culpepper revealed in 2020 that she wouldn't be able to direct episodes of Discovery Season 4 due to scheduling conflicts, adding that she will "miss my Star Trek family." In addition to directing the first two episodes of Picard, Culpepper also directed the pivotal Discovery Season 3 episode, "Forget Me Not."

Who is in the Discovery Season 4 cast?

The vast majority of the Discovery Season 3 cast is expected to return for Season 4 including:

The biggest cast member not returning is Michelle Yeoh as Philippa Georgiou. The character is getting her own Trek spinoff called Section 31. Georgiou left Discovery via the Guardian of Forever in "Terra Firma Part 2," marking the second time Yeoh has "left" Discovery. Prime Universe Philippa Georgiou was killed by Klingons in the second episode of Discovery ever, "The Battle at the Binary Stars."

Also (probably) not returning is Noah Averbach-Katz, who played Ryn, since he got vaporized. (Then again, he could play a new character!) Finally, although she had top billing in the first half of the season, Rachael Ancheril's Commander Nhan departed the USS Discovery in "Die Trying." Nhan could technically return since she's still working for the Federation but in an interview in 2020, Ancheril made it seem like Nhan probably was on that seed ship for good.

The Season 4 teaser trailer also revealed a new Cardaissan-esque character (unnamed), as well as the return of Vulcan/Ni’Var President T’Rina played by Tara Rosling. Also, it looks like Sonja Sohn will once again return as Gabrielle Burnham, Michael Burnham’s mother.

What is the plot of Discovery Season 4?

Unlike Season 2, Discovery Season 3 didn't end on a huge cliffhanger. For the first time, the plot and tone of a new Discovery season is pretty open-ended. The ship has a new (yet familiar) captain, the crew has spiffy new uniforms, the Federation is on the rebound, and Starfleet is back to helping people out whenever possible. When Burnham asks Tilly "What's the latest?" the implication is basically that the next Season 4 could go back to a planet-of-the-week format, similar to TOS, TNG, Voyager, or Enterprise. In fact, showrunner Michelle Paradise said that because Season 3 was loosely more episodic than Season 4, fans should expect the trend to continue into Season 4.

In terms of character arcs, we'll certainly need to get a sense of what Saru is doing on Kaminar, and if he'll ever return to the Federation. Further, the idea that Gray can finally be seen through holographic tech is something Paradise has said will "pay off" in Season 4.

A few fairly big plot points still need to be resolved in Season 4, the most intriguing of which are the connections between Discovery and the 2018 Short Treks episode "Calypso" — in which a totally vacant USS Discovery is being maintained by a fully sentient computer in an even more distant future.

""Calypso' has now become part of our canon. And it takes place far beyond our time now even, in Season 3. And yeah, eventually we'll have to find our way there. So that short, in the grand scheme of things, fits together as a piece. In certainly in Season 3, we were beginning that process with Zora — who isn't quite the Zora we saw in 'Calypso' — but we were getting that process started a little bit of her sparking to life in episode 4, and then coming in and having a bit more of a presence in 12 and 13. So, we're starting our way there."

The first teaser trailer revealed that some of Season 4 will be focused on the crew figuring out a large “gravitational anomaly,” which will require the Federation to unite with non-Federation worlds. This will include at least one trip to Ni’Var (Vulcan) and it appears that both Tilly and Burnham will get those awesome Romulan swords, first introduced by the Qowat Milat in Picard Season 1. Does this mean Tilly will practice the way of “absolute candor” and constantly tell the truth no matter what? Basically, she kind of already does, right?