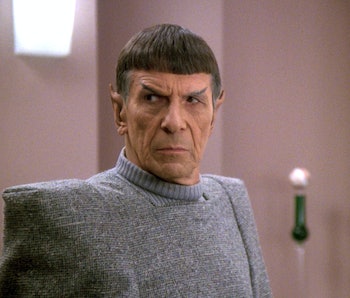 The Romulans and Vulcans are sharing a planet. In Star Trek: Discovery Season 3, Episode 7, "Unification III," the Trek franchise has created a direct-sequel to a beloved two-part episode of The Next Generation in which Ambassador Spock (Leonard Nimoy) was confronted by Jean-Luc Picard.

Back in 1991 (2368 in Trek years), Picard wanted to know what the hell Spock was doing living with the Romulans. And Spock's answer was: I'm trying to get them to reunite with the Vulcans. At the end of "Unification II," Data and Picard left Spock to his secret peace-mission work. Now, several Trek spinoffs later — and in the timeframe of the 32nd Century — we finally get to see what happened

But how and why did the Romulans and Vulcans get to this point? And why was this the moment to pick up the threads left over from a Next Generation episode that aired in 1991? The writer of this Discovery episode is Kirsten Beyer, who, in addition to being a co-producer on Discovery since 2017, is also one of the co-creators of Star Trek: Picard. Here's what she tells Inverse about writing "Unification III," the connections between the warrior nuns from Picard, why we love Vulcan culture, and that very nostalgic flashback to '90s Spock. Spoilers ahead!

When Michael Burnham and the USS Discovery arrive at what used to be called the planet Vulcan, they learn that it now goes by the new name Ni'Var. For scholars of the long and fascinating history of Star Trek fanfic, the word "Ni'Var" won't come as a shock. That's because it's literally as old as Trek fandom itself.

In the 1968 Trek fanzine Spockanalia, fan writer Dorothy Jones invented the word "Ni'Var" to mean "two forms." From that point on, other fanfic picked-up on the concept and used the "two form" concept of Ni'Var in all kinds of Spock and Vulcan-related writing. In 2002, in the Enterprise episode "Shadows of P'Jem," the word Ni'Var was finally made canon with the appearance of a Vulcan ship called the Ni'Var. But the use of Ni'Var to describe the new Vulcan-Romulan homeworld is a much bigger deal.

Beyer, of course, was hyper-aware of the history of the word in fandom when she picked it as the new name of the planet Vulcan for Discovery.

"I just thought it was beautiful, and captured perfectly what would be happening on Vulcan should they truly attempt reunification with the Romulans," she says. "When something that specific and powerful already exists, it feels wrong not to build upon it."

Building upon powerful themes that already exist is kind of what "Unification III" is all about. In 2258, when Micahel Burnham last saw Spock (Ethan Peck), he had his entire life ahead of him, a life that fans of Star Trek are very familiar with. By Picard's time in The Next Generation, Spock was a rogue Federation ambassador engaged in "cowboy diplomacy" in an attempt to reunite the pointed-eared brethren of the Vulcans and the Romulans. Now that Burnham has jumped well-beyond Spock's lifetime (including his sideways time travel into the J.J. Abrams movies) Beyer felt this was the moment for Burnham to discover her adoptive brother's legacy.

"It seemed important to answer the question: Had Burnham taken the time yet to find out what became of her brother?" she says. "It made sense that she had not yet done so, and was going to be a powerful moment when she finally did. It was just a wonderful thing that the images existed and could be used to put them in a scene 'together' one last time."

The images Beyer refers to comes to us as a holographic recording of Spock viewed by Burnham. In our world, this footage comes directly from two different scenes in the TNG episode "Unification II," in which Spock relates to Jean-Luc Picard exactly why he believes the "Union of the Vulcan and Romulan people, will not be achieved by politics or diplomacy, but it will be achieved." In the context of TNG at that time, Captain Picard was initially skeptical of Spock's belief that Vulcans and Romulans could live together. But Picard came around, and by the time of Star Trek: Picard, Jean-Luc was actively trying to save the Romulan people from the supernova that would eventually destroy their planet.

In his travels, Picard met the Romulan warrior nuns, known as Qowat Milat. Now, in Discovery, the Qowat Milat return, and Michael's own mother is a member of their order. This crossover from Picard seems like it could have only happened with Beyer's involvement. So because Picard aired earlier in 2020, when was it decided this crossover would happen?

"I had just finished shooting my episode of Picard, where we first met the Qowat Milat, so they were very fresh in my mind when we began work on this story," Beyer says. "When I returned to the Discovery [writers'] room and we started to think about Vulcan’s distant future, it made sense that at some point in the past, some of the Romulan refugees created by the supernova might have decided to attempt to return home. Spock had certainly planted the seeds and it was lovely to think that they might have truly taken root. But, because we had the Qowat Milat now as part of Romulan history, it seemed possible to us that an order like that could have been instrumental in bridging the gap between the Vulcans and the Romulans, where trust would have been so very difficult. To have a group of women who were renowned as candid truth-tellers just seemed incredibly helpful."

Although we never get to see the surface of Ni'Var in "Unification III," several familiar aesthetics from the classic Trek are strewn throughout the episode. When Burnham engages in a huge scientific debate with the representatives from Ni'Var, it's almost like a political version of Kirk and Spock's Vulcan grudge match in "Amok Time." There's a gong. There are flames. Things get real.

"For me, the joy of 'Amok Time' is the deep dive into Vulcan culture," Beyer says."It’s simply fantastic. So any time you enter that arena, you have to build from there and remain true to who they are. But of course, the fun is in imagining who they might also become depending upon the circumstances."

In this case, the circumstances are a human trying to plead her case in the name of her famous Vulcan brother. It doesn't go over easily, and the Vulcans treat Burnham differently than viewers might expect. Just because she's Spock's sister, doesn't mean they are just going to bow to her, a point which Beyer though was essential to making the story work. "This became an opportunity for Burnham to face the central question she had been asking herself since she returned to the ship after waiting a year to find them: Where do I truly belong?" Beyer says. And the most important part of that is that you can't fool the new Vulcans about what you want, even when you try to invoke nostalgia for Spock.

After all, as Beyer points out, "Vulcans, as a people, take everything so incredibly seriously."

More like this
Entertainment
8.1.2022 1:00 PM
Rick and Morty: Vindicators creator reveals the origin story we “need” next
By Jake Kleinman
Entertainment
21 hours ago
For All Mankind’s game-changing Season 3 twist had been planned since 2018
By Ryan Britt
Entertainment
7.30.2022 12:00 PM
How the most iconic Ms. Marvel scene confirmed the show’s “enormity”
By Mónica Marie Zorrilla
Related Tags
Share: