“It's really empowering to know how much safer the world is becoming for us.” 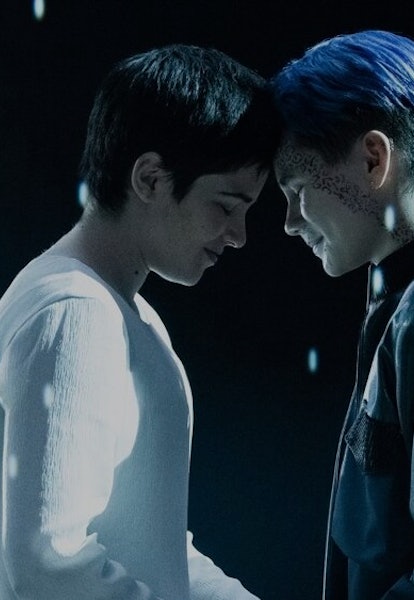 Calling Gray Tal from Star Trek: Discovery an old soul is a bit of an understatement.

Ian Alexander's character, new to the third season of CBS All Access' flagship series, hails from a remarkably long-lived humanoid species known as the Trill, some of whom can inhabit multiple host bodies across numerous lifetimes. Since the species first appeared in '90s Trek shows like The Next Generation and Deep Space Nine, they've been embraced by queer and trans fans as representing a more fluid and multifaceted way of thinking about gender. In 2020, Star Trek turned subtext into a major plotline.

Before making his debut as the first trans actor in Star Trek history, Alexander drew acclaim for his performance as Lev in The Last of Us Part II, the dramatic post-apocalyptic video game which claimed numerous awards at the 2020 Game Awards. While the temperament of these two characters couldn't be more different — Gray exudes effervescent confidence, while Lev is cautious and methodical — neither is defined by their trans identity. It's simply one component of who they are.

"It's such a privilege to be pioneering this representation for my community," Alexander tells Inverse. "Trans people have been erased from history for so long, but we've always been here. Now we finally get to be visible and have our voices heard."

Inverse spoke with Alexander about the fan response to Gray, the character's evolution heading into Discovery Season 4, and the importance of authentic trans representation in media. The interview below has been lightly edited for clarity and brevity.

What has the fan response to Gray been like so far?

I've seen so much love for Gray, so many messages thanking the writers and thanking me for bringing a happy trans character to the screen. There isn't really that much mention of the fact that Gray is trans, but that is something that doesn't go it's not unnoticed. People know that Gray and Adira are trans and non-binary.

A lot of fans have told me it helped their families understand they/them pronouns more. Others pointed to my character as an example of positive trans representation. With Elliott Page coming out as trans and everything, there really is such a shift in the industry going on, toward more trans stories that are told by us and for us.

What does it mean to you to be the first trans actor on Star Trek?

It's such a privilege to be pioneering this representation for my community, the transgender community, and to be part of such an accepting and supportive franchise like Star Trek.

It makes sense that it would be one of the first shows to normalize trans people. The Last of Us Part II also did that —introduced trans characters that got to simply exist. The fact that they were trans didn't go unnoticed, but it came up when it needed to in conversation, and that wasn't something that defined their identity.

I'm really grateful because this is opening the door for so many other people. Trans people have been erased from history for so long, but we've always been here. Now we finally get to be visible and have our voices heard. It's really empowering to know how much safer the world is becoming for us.

How did you bring a sense of otherworldliness to your character?

Gray is very ethereal, in an angelic sort of way. It's a bit ambiguous to the audience right now whether Gray is still an actual person or if he's, like, the echoes of Adira's memory. That will be answered later in the season.

I've been trying to bring a little bit of disconnect to Grey's character because he can't be seen or heard by anyone except for Adira. I definitely bring that feeling of derealization and disconnect from everyone around him into my performance. It's kind of surreal, standing right in front of my castmates, and they're all and interacting as if I'm not there. I can't wait to see how Grey develops in that limbo space he's stuck in right now.

Other than the Trill, which Trek characters or species most appeal to you?

Spock probably was my favorite character as a kid, because my parents are obsessed with Star Trek, and they loved him. I really liked Vulcans because they have emotions, they just choose a logical approach. There are moments where it's so delicious to witness the acting — how you can see them redirect something that's really upsetting into something logical. I've always been fascinated by that.

How has the internet affected your career trajectory?

The internet and my career go hand-in-hand — they're one and the same. So much of life has been online because I'm Gen Z — my interactions with people, my networking, connecting with people, and creating has happened online.

Finding that casting call [for The OA] and being able to make friends and connections through my social media presence has really changed my life. I'm just forever grateful to all of the amazing people that I've met, all the places I've been, and things that I have been able to do as a result.

What have Gray and Lev taught you in the last year?

From Lev, I learned how to really believe in myself, embrace fear, and ask for help. That's something I've learned from Star Trek as well. Lev doesn't quite realize how powerful he is yet, whereas Gray definitely has a lot more confidence. Both of them are extremely smart, yet embrace the fact that they don't know — can't know —everything. That's something I've carried with me.

How much did you get to shape the character of Gray?

Especially for Season 4 — which I won't talk about! — I've had a lot more hands-on involvement, like my suggestions about the future for Grey. They already have so much planned. Michelle [Paradise] and Alex [Kurtzman, Discovery's showrunners] have this whole vision that I'm very, very excited for everyone to be able to see.

The idea of trans authenticity — having a trans actor playing a trans character — has been something I bring to each project. It's really fun to explore those layers of gender and identity in this future that's so far ahead of where we are, where it doesn't really matter.

You and Blu del Barrio have become close with Anthony Rapp and Wilson Cruz. What does that relationship mean to you?

They really are mentor figures to us, both in and out of the show, which I think people can pick up on. I was bawling my eyes out the other day with Anthony's voice-log thing on Instagram, where he was in character as Paul Stamets, and makes this recording after Adira came out as non-binary to him.

He says, "I'm not Adira's father, but I hope that I can be someone they feel seen by." I just started crying, because it's paralleling what the four of us actually talk about in real life. Over the phone and over Zoom, they'll remind us we're not alone. It really is helpful having that kind of a queer family on-set and off-set.

Anthony Rapp, Wilson Cruz, Blu del Barrio, and Ian Alexander share a message of love and affirmation on Spirit Day, an October holiday of support and solidarity for the LGBTQ community.

Which supporting TV characters stood out to you this year?

I've been on a major animated show kick lately, and I'm obsessed with Kipo and the Age of Wonderbeasts on Netflix. Wolf and Benson are two of my favorite supporting characters in any show. I just love seeing complex, funny, complicated cartoon characters. It's so well done and so wholesome.