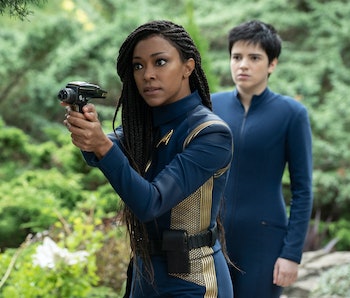 The wormy Trill symbionts are the sneakiest of Star Trek time-travelers. They don't even have to literally travel through time to know about the distant past — they just outlive everyone else. Because the Trill have multiple hosts and memories that span centuries, having a Trill crew member in Star Trek: Discovery Season 3 is a brilliant twist that allows the time-displaced crew, perhaps, suddenly gain some insight into everything that happened after 2257.

In theory, because Adira (Blu del Barrio) carries the Trill symbiont called "Tal," they could have memories that go all the way back to the TNG and DS9 era of Trek. But, the challenge for Discovery in Episode 4, "Forget Me Not," was to unlock those memories without killing Adira in the process. Along the way, Discovery cleverly added to and sidestepped some old Trekkie Trill canon from the '90s. Here's what was subtly changed and how it all shakes out. Spoilers ahead!

3. Non-Trill can now interact with — and "see" — former Trill hosts

One of the most popular people on Star Trek: Deep Space Nine was the "joined" character of Dax. Although most DS9 fans think of Jadzia Dax (Terry Farell), there were, several other Hosts of the Dax symbiont, including Ezri Dax (Nicole de Boer) in DS9 season 7, and several previous hosts who we met either by flashback or by proxy in episodes like "Facets." And although the Trill originated in The Next Generation episode "The Host" the canon rules for the Trill were overwhelmingly established in Deep Space Nine.

One of those concepts was the idea that the only way to "meet" former hosts was the zhian'tara ritual, in which the memories in the symbiont could be temporarily put into different non-Trill bodies. In the episode "Facets," this meant that various hosts of Dax got to inhabit the bodies of Odo, Quark, Leeta, and others. But, this didn't mean that we could "see" the face of Curzon Dax in the "present." Instead, Curzon Dax briefly was in Odo's body (and infamously, didn't want to leave.)

Discovery has changed this idea a tiny bit. Burnham and Adira don't do the zhian'tara ritual but with the help of the Guardians, Burnham is able to exist inside the mind of both the Tal symbiont and Adira at the same time. This allows Burnham to actually "meet" the previous hosts of Tal, even briefly. This is way more facetime — literally – than anyone got in DS9 with the previous hosts of Dax.

2. The Trill policy against "reassociation" gets a pretty big twist

In the DS9 episode "Rejoined," Jadzia Dax was reunited with Lenara Kahn. In their previous lives, with previous hosts, Dax and Kahn had been married when they were known as Torias Dax and Nilani Kahn, respectively. Jadzia and Lenara wanted to rekindle their romance in their new host bodies, however, Trill society considered such "reassociation" to be taboo. The reason why had to do with the idea that not all Trill were joined with symbionts, and had "reassociation' become common, the fear was that joined-Trill would become an exclusive club. Bottom line: Jadzia and Lenara did not get back together because the Trill society didn't want them to.

Discovery spins this idea in "Forget Me Not," because, in a sense, Adira and Grey (Ian Alexander) are "reassociated" in the same body after Grey is killed. Basically, the idea of Adira taking on the symbiont of their romantic partner, Grey, would be analogous to Worf (Jadiza's husband) taking on the Dax symbiont after Jadzia died. This didn't happen of course, but thinking about it is pretty interesting. In the DS9 episode "Facets," we did learn that one of Jadzia's former hosts — Curzon — was in love with her before she was joined with the symbiont. Grey and Adira both being hosts of Tal is a little bit similar.

1. Humans can become joined with Trill, without life-threatening consequences

Although the previous episode hinted at this idea, "Forget Me Not" doubles-down on the notion that there is not a "recorded" instance of a human and a Trill symbiont joining successfully. So, we have to assume Trill society probably repressed the records about Riker in TNG, or they were just never told. Meanwhile, Discovery's info is out of date because of where they're from in the timeline (pre-TNG). Culber mentions there's not a "precedent" for this kind of thing, which isn't true, but is true from his point-of-view because he doesn't have Dr. Crusher's files.

Previous canon stipulated that a human host will die if they keep a Trill symbiont in their body. Adira has now reversed that. Presumably, this has something to do with the fact that Adira and Grey Tal were in love before Aidra became...Adira Tal. Either way, unlike Riker with the Odan symbiont, Adira's body has figured out how to join with the Tal symbiont without dying.

Now Discovery has a resident crewmember who has retroactive memories going all the way back to the era of Star Trek: Picard. Basically, Adira is not only now the most interesting character on Discovery, but also, a person who is hiding untold Star Trek spoilers for the future.