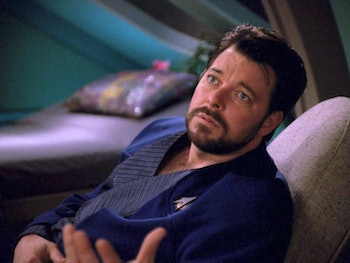 The newest crewmember of the USS Discovery has a secret. Unbeknownst to Saru and Burnham, this secret references something that happened to Commander William T. Riker in "The Host," a pivotal episode of The Next Generation from 1991. But why don't Saru and Burnham mention Riker or the Enterprise-D?

Well, there's a very good reason. What's more, this sly TNG reference might give us some indication of how the rest of this plotline might play out. Here's how the big twist in Discovery's "People of Earth" works in context with the rest of Trek canon, specifically, The Next Generation and Deep Space Nine.

Although initially posing as an "inspector" for United Earth, Adira (Blu del Barrio) is a human harboring a Trill symbiont that was previously in the body of a deceased Starfleet admiral named Senna Tal. Fans might remember that Adira was announced as the franchise's first gender non-binary character, though in this episode Adira uses "she" and "her" pronouns.

Despite what the Discovery crew says, Adira is not the first human to be joined with a Trill symbiont.

Why didn't Burnham and Saru know about Trill? — Although Discovery now takes place in 3188-ish, the ship just jumped from the year 2258. This means that in terms of Starfleet knowledge of galactic events, the crew of the USS Discovery's info predates The Original Series. (The Mirror Universe is the one exception here.) That means if the Discovery ever encounters Romulans, the crew will be shocked to learn that Romulans look like Vulcans, since that didn't become common knowledge until the TOS episode "Balance of Terror," which takes place in 2266. So, what does that have to do with the Trill?

Burnham's dialogue suggests she's aware of Trill, but didn't know about the symbiont thing. This checks with visual canon we've seen in Discovery so far: Leland posed as a Trill in a deleted scene from Discovery Season 1, and a Trill crewmember appeared in the DISCO-era Short Treks episode "The Trouble With Edward." So, Starfleet is aware of the Trill, they just were (mostly) unaware of the fact that the humanoid Trill were often joined with symbionts.

The first "discovery" of Trill symbionts didn't happen for Starfleet until 2367, during The Next Generation episode "The Host."

Trill origins are confusing — Canon gets dicey when you go back to the origins of the Trill. In "The Host," Picard, Riker, Crusher, and the rest of the crew seem to know nothing about the Trill symbionts. In Deep Space Nine, Sisko has a long relationship with Dax, which seems to indicate some people in Starfleet were confidentially aware of the Trill symbionts. We also tend to think of the Trill having spots on their necks, but in "The Host," the Trill Amdassord Odan has one of those classic Star Trek bumpy foreheads. The IRL explanation is simple: When Terry Farrell was cast as Jadzia Dax in Deep Space Nine, the producers tried out the "original" Trill makeup and decided it looked weird on her, so they retroactively decided to do the dots on the neck instead. This inconsistency was addressed in some non-canon Trek books and basically indicates that different Trill from different parts of the planet look different from each other. (Star Trek: Picard tried-out a similar approach with differing Romulan foreheads, too.)

Anyway. Discovery is kind of avoiding any 24th-century info gaps about the Trill simply because Saru mentions that his info is coming from "the Sphere Data." In Discovery Season 2, the ship encountered a sentient alien sphere full of all sorts of useful info. That said, the Sphere Data couldn't have read the future, meaning the details of what happened in the 24th century are sketchy for the Discovery crew.

Riker has done what Adira is doing now — Adira is a human harboring a Trill symbiont, which is biologically risky. In "The Host," Riker took on the Odan symbiont when the host body was killed. Now, unlike Adira, Riker was able to access Odan's memories, because that was actually the point of that story. But Riker was almost killed in the process. He was mentally able to handle the joining, but his body couldn't keep up with the extra strain.

With Adira, it's the opposite. Adira seems physically okay (so far) but she's not able to access the memories of the Tal symbiont. Burnham and Saru don't have access to Dr. Crusher or Dr. Bashir's logs about Trill, because they're still pretty new to the future, and haven't really gotten the full download on Starfleet history, yet. What this means for Adira's journey is unclear. "The Host" tells us that a human with a Trill symbiont might be in danger of losing their life. But, that may not be the case anymore. After all, the events of "The Host" are now about 830 years in the past. The Trill could have changed a lot since then!

In any case, we'll almost certainly learn more about Adira and their Trill connections in the next few episodes. But, it remains to be seen if anyone will mention Jadzia or that one time Will Riker became the first human to have a Trill symbiont, too.