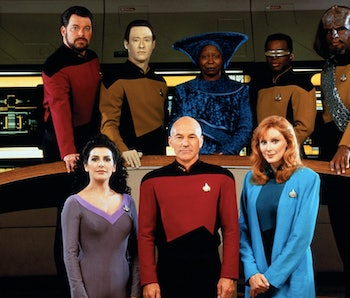 Throughout Season 1 of Star Trek: Lower Decks, fans of The Next Generation-era of '90s Trek were wondering if anyone from the Enterprise would actually make an appearance. Sure, we got Q, but what about any of Picard's old gang?

Well, RED ALERT, there's a spoiler incoming for the Season 1 finale. But the news is slightly bigger than the big reveal at the end of the episode. This very special guest appearance is going to last well into season 2. Ahead of the Lower Decks finale — "No Small Parts" — I jumped on the phone with showrunner Mike McMahan, and he confirmed outright that this is only just the beginning.

Just as the USS Cerritos is about to be destroyed by the Pakleds, another starship warps in – it's the USS Titan, with Captain William T. Riker (Jonathan Frakes) and Commander Deanna Troi (Marina Sirtis). Although this ship has been mentioned a lot in Lower Decks, we've never actually seen it, until now. In Star Trek Nemesis, Riker and Troi transferred to the Titan after Data died. That was the year 2379. Lower Decks takes place in the year 2380, so right now, Riker is only a year into being a full-blown Captain. And to be clear, this is 19 years before Riker and Troi are living in retirement on the planet Nepenthe as depicted in Star Trek: Picard.

Riker and Troi coming to the rescue is a thrilling moment for TNG fans. Yet the ending of the episode proves it's more than just an Easter egg. By the end, Boimler (Jack Quaid) gets promoted and transfers-off the Cerritos and to the Titan, leaving his best friends behind. So, this will all get explained away off-screen for Season 2, right? Boimler's not going to stay on the Titan, and the show isn't going to now feature Riker and Troi in regular roles, right? That would be too much? Trekkies of TNG aren't actually getting a bunch more Riker and Troi in Lower Decks Season 2, are they?

Yes, Trekkies. You are getting more of Riker and the Titan.

"You will be seeing Riker and the Titan, because Boimler is on the Titan." Lower Decks showrunner Mike McMahan tells Inverse. "That's where he serves now. I mean, it's Boimler's dream to serve there, and we play that out. We see how that works out for him."

McMahan also pointed out that the goal of the Lower Decks season finale: We wanted it to feel like a Star Trek finale. But also ending some stories we told this season, and leading into stories we’ll tell next season."

Now that Boimler has transferred away from his BFF Mariner, and lives and works on the Titan, it sounds like Lower Decks Season 2 will have a lot going on. Will Boimler actually stay on the Titan? Will everybody on that ship switch to the colorful Lower Decker uniforms? We'll have to wait and see.

During the NYCC 2020 Lower Decks panel, Mike McMahan confirmed Riker will appear in at least the first episode of Lower Decks Season 2.

Lower Decks Season 1 is streaming now on CBS All Access.