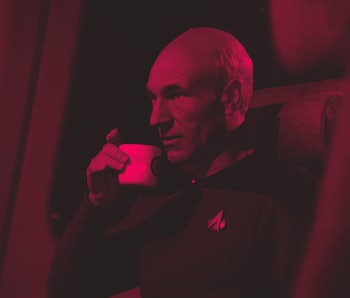 In Star Trek: Discovery Season 2, Captain Pike says, "Starfleet is a promise. I give my life for you; you give your life for me. And nobody gets left behind." Almost every iteration of Starfleet we've seen adheres to this idealistic rule. But what about Starfleet's impact on cultures and people who are not part of their organization? The United Federation of Planets, and its exploratory space fleet might have altruistic goals, but sometimes all of this future space utopia stuff is dysfunctional as hell.

The Season 1 finale of Lower Decks — "No Small Parts" — offers a thought-provoking critique of what Starfleet is supposed to be doing, one that would be tough to imagine in earlier entries of the franchise.

Spoilers ahead for the Lower Decks Season 1 finale.

Two incidents in "No Small Parts" drive home the same theme: Starfleet doesn't always know what's going on, and that the mission to boldly go where no one has gone before often means ignoring the places it's already been.

At the start of the episode, the Cerritos visits the planet Beta III, only to discover the inhabitants there have gone back to worshipping an evil computer defeated by Captain Kirk some 100 years prior. Meanwhile, the big conflict is all about a "silly" alien race from The Next Generation called the Pakleds. Although previously presented as a "joke" in the episode "Samaritan Snare," they are now super-deadly.

At the end of the episode, Ensign Mariner and her mom, Captain Freeman, have a frank discussion about how everything that happens in this episode is pretty much Starfleet's fault. Here's how it goes down.

Freeman: “Starfleet considers Beta III a known culture. They have no idea the Betans have regressed!”

Mariner: “That’s Starfleet; good at observing, bad at maintaining. We can’t just assume that people are going to keep doing the right thing a generation down the road!"

Early in the episode, Freeman points out that Starfleet has a policy of "some intervention," meaning, that when things really go off the rails, Starfleet will do something. But sometimes it takes too long for that positive intervention to happen.

Throughout Season 1, Lower Decks strongly asserts that although Starfleet is awesome and altruistic, its adherence to a lot of specific rules and regulations can make it more bureaucratic than heroic. The entire purpose of the USS Cerritos is "Second Contact," meaning they follow-up on alien cultures who have been discovered and make sure everyone is okay.

In an average episode of TOS or TNG, these kinds of discoveries are treated with awe and wonder. In Lower Decks, we're getting a glimpse of a kind of laid-back imperialism. Starfleet helps out these various alien planets, but really only when things get out of hand. And when that happens, it looks like the vast majority of Starfleet ships are on clean-up duty.

The interesting thing with this critique is that Lower Decks isn't a spoof. It is Star Trek canon. This is what Star Trek having a conversation about its optimistic ideals looks like.

Lower Decks is more like Picard than you realize

Although the tones and storylines could not be more different, the general attitude toward the Federation and Starfleet in both Lower Decks Season 1 and Picard Season 1 is basically the same.

In the Season 1 debut of Picard, Jean-Luc explains he quit his job as Admiral because the organization was "No longer Starfleet!" In other words, because Starfleet shut down his rescue of the Romulans from a big supernova, and outlawed Synths, he felt his superiors had abandoned the organization's principles. There's a precedent for this kind of thing in The Next Generation. Remember when that Admiral in Picard yelled at Jean-Luc and told him where to stick it? Well, a very similar conversation happens between Picard and a different Admiral in the TNG episode "Descent." Basically, when Starfleet finds out that Jean-Luc let a Borg drone go free (Hugh) the party line becomes: Forget all this seeking out new life stuff, we only care about fixing huge problems.

When things get difficult, Starfleet people who stick up for the "real" ideals of Starfleet are actually outliers. In the Season 1 finale of Discovery Burnham refuses to go through with a plan that would destroy the Klingon homeworld, even though it would help the Federation win the war. This kind of thing goes back to Captain Kirk refusing to kill the Gorn Captain in the episode "Arena," even though if he had, Starfleet would have been fine with it since the Gorn had already destroyed several Federation colonies.

Lower Decks is saying that as time goes on, and Starfleet gets more rules, it gets harder for the idealistic heroes to emerge.

The 21st century is a mixed bag

The biggest difference between past Star Trek TV shows and the ones in production now is that each version — from Discovery to Picard to Lower Decks — actively wrestles with the day-to-day practicalities of hopeful vision of the future actually works. The status quo of Earth is generally peaceful in these imagined futures. But, unlike TOS or TNG, the newer shows have gestured toward something that Lower Decks just came right out and said — maybe all of this stuff takes way more work than is possible. Riker was able to come to rescue the Cerritos at the last second, but what about everyone else? Starfleet's job is to explore the galaxy, not to save it. Yet, the galaxy very much needs saving.

This paradox — a pull between exploration and preservation — is kind of where Star Trek lives right now. Lower Decks did a helluva job of making that dichotomy clear. Yes, the world of Starfleet in 2380-ish is pretty ideal. But, for the people on Beta III or for the victims of the Pakleds, things are pretty damn grim. Ditto for all of Picard Season 1: Birds are chirping on Earth, but the territory of the galaxy that the Fenris Rangers patrols is full of warlords and criminals. Inside of Trek's Starfleet utopias, there are many dysfunctional dystopias.

Starfleet's heart is mostly in the right place, of course, but the clever takeaway of Lower Decks is simple. Having good intentions isn't always enough.

Lower Decks Season 1 is streaming now on CBS All Access.