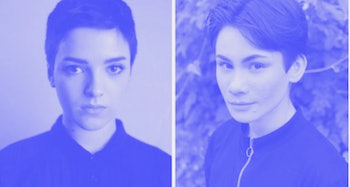 Diversity and inclusion has been a fundamental element of Star Trek since the debut of the original CBS series in 1966. Discovery Season 3 will further that vision by introducing the franchise's first transgender and non-binary characters, portrayed by actors Ian Alexander and Blu del Barrio.

Alexander is known for breakout performances as Buck Vu in The OA and as the rebellious Seraphite Lev in The Last of Us Part II, and also an advocate for transgender equality, racial justice and mental health awareness for LGBTQ+ youth.

Alexander will play Gray, described in a press release as "empathetic, warm and eager to fulfill his lifelong dream of being a Trill host, but he will have to adapt when his life takes an unexpected turn."

We may have already briefly glimpsed Alexander's character in the trailer for Season 3, which was released all the way back in October 2019. It's possible that's Gray we see floating in the Trill pools in one shot.

Del Barrio will play Trek's first non-binary character, Adira, "highly intelligent with a confidence and self-assurance well beyond their years." Adira finds a "new home" on Discovery, according to the press release, but it's not clear whether that means they are a member of the crew. Regardless of their affiliation, Adira will form an "unexpected bond" Stamets and Culber.

Del Barrio was in their final year of studies at the London Academy of Music and Dramatic Art when they auditioned for the role of Adira. Discovery Season 3 will mark their television acting debut. GLAAD recently sat down for a Q&A with del Barrio, which can be found here.

"Star Trek has always made a mission of giving visibility to underrepresented communities because it believes in showing people that a future without division on the basis of race, gender, gender identity or sexual orientation is entirely within our reach,” co-showrunner and executive producer Michelle Paradise said in a press release. “We take pride in working closely with Blu del Barrio, Ian Alexander and Nick Adams at GLAAD to create the extraordinary characters of Adira and Gray, and bring their stories to life with empathy, understanding, empowerment and joy.”

Season 3 will take the Discovery crew into unknown future, nearly 1000 years from home. Along with the help of some new friends, they'll have to work together to restore hope to the Federation.