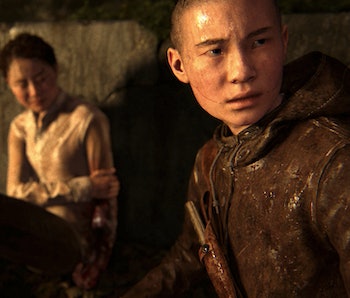 The Last of Us Part II is a controversial game, and much of that controversy has been fueled by bigotry toward developer Naughty Dog’s foregrounding of LGBTQ+ and gender non-conforming characters. However, the game’s decision to deadname a transgender character — Lev, played by trans actor Ian Alexander — has also prompted condemnation from members and allies of the LGBTQ+ community.

In a game already dealing with fabricated controversy from the far-right corners of the gaming community and relative silence on why the developers chose to portray these issues in this manner, The Last of Us Part II’s actually legitimate deadnaming controversy reveals that even progressive developers have a long way to go.

This article contains spoilers for The Last of Us Part II.

What is deadnaming? GLAAD Director of Transgender Representation Nick Adams has defined deadnaming as “To reveal a transgender person’s birth name without their explicit permission,” to The New York Times. This practice is harmful because it constitutes “an invasion of privacy that only serves to undermine the trans person’s true authentic identity, and can put them at risk for discrimination, even violence.”

How does deadnaming come up in TLOU 2? Lev is an adolescent who befriends Abby during her treacherous adventure in Seattle. Lev has been kicked out of his religious community known as the Seraphites for shaving his head and identifying as male. The game drops some pretty clear contextual hints about Lev’s identity, but during a confrontation with some Seraphites, they angrily refer to Lev by their deadname.

Lev asks if Abby heard what the Seraphites called him, and she confirms that she did. Abby doesn’t press the issue, only saying that he can tell her more if he feels like it. Lev declines.

How players have responded — “I'm not going to pay $60 for a game that mistreats, deadnames, and abuses trans characters,” translator and RPGSite and Silconera contributor Kazuma Hashimoto said on Twitter. “It doesn't matter how "dark"/"grim" a setting is, that's unnecessary. Developers need to understand what kind of player will feel good about that kind of violence directed at trans people.”

While The Last of Us Part II likely aims to shed light on the difficulties of being transgender, it does so clumsily. Hashimoto points out that some gamers might even get pleasure from seeing transgender characters beat up or deadnamed. Even if the game portrays actions like deadnaming in a negative fashion, should it really be portraying them at all?

The game clearly explains that the Seraphites expelled Lev for defying the group's traditional gender roles, so deadnaming the character comes across as an unnecessary “saying it louder for the people in the back” moment. It’s hard for the game to present itself as progressive while pandering to ignorance.

A blog post from Harsupis elaborates on this issue:

“It is, for example, extremely distressing for cisgender writers to have a trans character where we have to go through multiple levels in a meandering subplot where that character is repeatedly deadnamed and it is revealed that he was meant to 'become a wife to an elder.'...Fellow cis writers: do not deadname your trans characters. Just don’t do it. We don’t need to.”

Critics suggest cis white male writers like Neil Druckmann are out of their wheelhouse on this issue and disappointingly rely on queer identity as a mere setup for conflict and abuse. This widespread sentiment is apparent through just a simple Twitter search. Deadnaming characters and dramatizing their abuse isn’t “representation”, it’s bad writing.

It's important to note that much, if not all of the criticism here is directed at the writers: Alexander's portrayal of Lev has drawn warm praise online.

The Inverse Analysis -- The Last of Us Part II makes some significant strides in terms of LGBTQ+ representation in games, but its shortcomings also show that the industry has a long way to go. While the handling of Lev may have been well-intended by Naughty Dog’s writers, many players find it offensive, objectionable, and just plain unnecessary. Games don't need to resort to deadnaming in order to say they're representing the transgender experience.

More like this
Gaming
Sep. 26, 2022
Last of Us HBO trailer hints the show won't ignore a key romance
By Jen Glennon
Gaming
Sep. 28, 2022
Demon's Souls and 9 more great sci-fi and fantasy game deals on PlayStation
By Robin Bea
Entertainment
Sep. 26, 2022
Everything you need to know about HBO's The Last of Us TV series
By Corey Plante and Willa Rowe
Related Tags
Share: