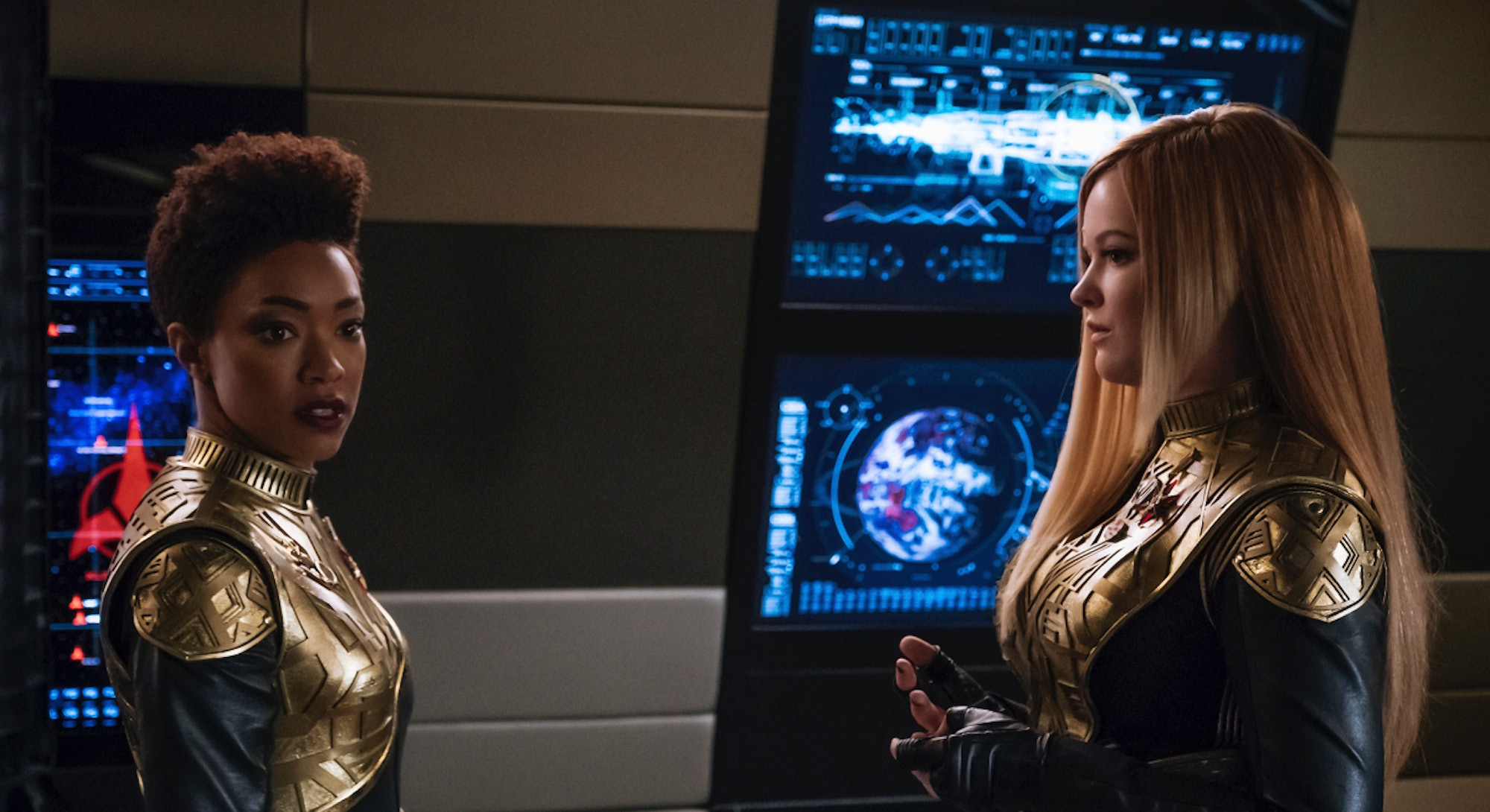 By now, fans of Star Trek: Discovery know that the Mirror Universe is back in Trek canon in a big way. In the mid-season premiere, “Despite Yourself,” the crew of the USS Discovery determines that they are no longer in the safe confines of a dimension where the friendly Federation exists. In fact, what they’re about to experience is far worse than anything the Klingons could have thrown at them. Now, instead of fighting a war with a merciless enemy, the altruistic Starfleet crew members will have to impersonate evil versions of themselves all while being confronted with people they’ve met before, who are completely different in this reality than they were in the “real” timeline. On the upside, everyone is also getting some crazy new clothes.

Since its introduction in the 1967 original Star Trek episode, “Mirror, Mirror,” the concept of the Mirror Universe presented an extreme answer to the questions of nature versus nurture. In Trek’s Mirror Universe, anyone can become a secret asshole, no matter how nice they seem in our universe. But, unlike “Mirror, Mirror,” this isn’t a one-off. Discovery is stuck in the Mirror Universe for a while. And the showrunners of the series — Gretchen J. Berg and Aaron Harberts — have revealed why this was the right direction for the show, and also why it almost happened way sooner.

In October of 2016, Star Trek: Discovery’s original showrunner — Bryan Fuller — stepped down. But, he threw his confidence behind Gretchen Berg and Aaron Harberts right away, saying on Twitter: “Riker spent 7 years of TNG unready for Captaincy, @GretchenJBerg @AaronHarberts are ready. Thrilled to see them in command of the Bridge.” Since then, in addtion to producer Alex Kurtzman, Harberts and Berg have been the primary creative voice behind Discovery, helping to steer the newest Trek series into places the franchise had never gone before. But, the concept of having a huge chunk of the series take place in the infamous Mirror Universe, did originate with Byran Fuller. It was just originally going to happen much earlier.

“It actually was something that was there from the very, very beginning with Alex and Bryan. I think even maybe before we came on board,” Gretchen J. Berg tells Inverse. “And it was something we wanted to do because one the main themes of the show this year is about is about self-discovery. And so it just felt like going to Mirror was somehow going to be helpful on that journey.”

“The original structure of the season was going to have them go to the Mirror Universe, let’s say at the end of episode four,” Aaron Harberts explains. “And the Mirror Universe was going to then be a construct that then carried through the entire rest of the run of the season. But we felt it was too early to go over then because you didn’t know who these people were yet. And so it was hard to introduce doppelgangers if you don’t know who the prime character is.”

By anchoring the rest of the new season in an alternate dimension, one in which characters can possibly be betrayed by another character at any moment, Harberts and Berg have managed to allow Star Trek: Discovery to become more similar to Game of Thrones, but with slightly more moral complexity. In impersonating her evil self, Burnham is forced to act ruthless and domineering. But, in our universe, we know Burnham was a rule breaker, one capable of mutiny. This same parallel works for Tilly, who we now know is the Captain of the ISS Discovery in the Mirror Universe. It seems impossible, and yet, we know Tilly is ambitious and has expressed a desire to become the youngest Captain in Starfleet since her very first episode. So, the question is, are you simply a collection of your actions? Or are their tendencies buried in a person that could cause them to slide on a scale closer to being a villain than a hero? Like several other classic Trek premises — from “The Enemy Within” to “Chain of Command,” this twist examines human nature on a greyer scale which is actually intrinsic to the franchise. But, that doesn’t mean the Mirror Universe is a cheap twist. This was planned.

“Sometimes you see in a lot of movies nowadays and TV shows, people are trying so much to twist it in a place that no one sees coming that it ends up feeling either impossible or illogical or ridiculous or just kind of like just bald-faced trying to top yourself,” Harberts says. “And I think sometimes when we look at twists, we say, okay. We’re going to do this reversal or this twist in the story, but we’re going to execute it or have the fallout be different from what you thought.”

“All of our stuff is built from scratch, but the elements of design to it and all the nods to the original series but also just updated it in a way. They’re fantastic. I mean, it’s like the original Trek meets Rhythm Nation. You know, it’s badass.” — Gretchen J. Berg

Still, for the casual viewer, the most interesting thing about heading into the Mirror Universe might just be the crazy aesthetics. Which is one more reason why the Discovery team wanted to hold back revealing the Mirror Universe. It’s very difficult to produce alternate versions of sets and costumes you’ve already created, meaning the Discovery team had to work overtime to essentially create props, costumes and sets for two types of TV series; one good and one evil.

“The heroes of our show are the production team,” Harberts says. “From costumes to props to production design, they just went for it. But they needed the time. They needed so much advance notice. I mean, you saw those Mirror Universe uniforms? Those just didn’t drop out of thin air.”

And now that the new Mirror Universe costumes have arrived, it looks like cosplay at future Star Trek conventions will never be the same. “They’re fantastic. All of our stuff is built from scratch, but the elements of design to it and all the nods to the original series but also just updated it in a way. I mean, it’s like the original Trek meets Rhythm Nation,” Berg says. “You know, it’s badass.”