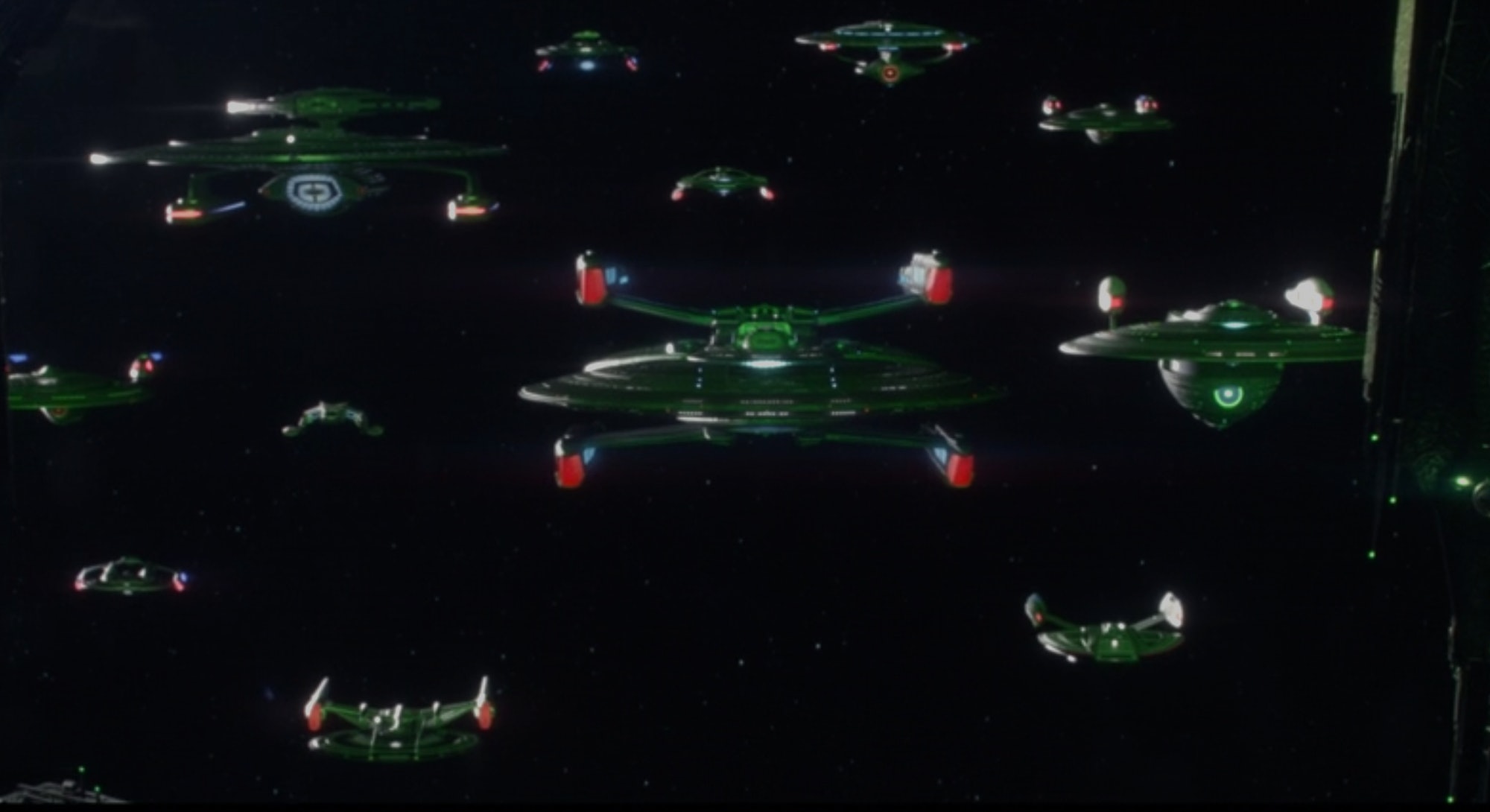 For the first time since Star Trek returned to TV in 2017, the visual vibe of Starfleet suddenly looks like it did in the Next Generation era. In the Season 2 premiere of Star Trek: Picard, “The Star Gazer,” a huge Federation fleet arrives to tango with a bizarre new Borg craft, and the ships in this fleet are instantly recognizable. But the last time we saw a fleet of starships from this era, in the Season 1 finale of Picard, the visual aesthetic was decidedly different. With the introduction of a new USS Stargazer and a plethora of familiar starships, Picard has gone all-in on canonical fan service. Spoilers ahead.

But how did this happen? Picard production designer Dave Blass listened to fans who didn’t like the “copy-and-paste” fleet from Season 1, and he enlisted the help of starship makers for the MMO Star Trek: Online. Inverse caught up with both Blass and Star Trek: Online starship guru Thomas Marrone to talk about the new Stargazer, the canonical appearance of several starships from Star Trek: Online, and why, as fans, it was important to get the ships right.

As the Season 1 finale of Star Trek: Picard aired in 2020, Dave Blass was already working on Picard Season 2.

“We got the script and found out we were going to do a new ship and that ship was going to be the Stargazer, and that there was going to be a whole fleet in this episode, too,” Blass explains. “And at the same time, the Season 1 finale drops, and fans had a reaction to the Zheng He fleet, and they’re not happy.”

Blass is referring to the moment in “Et in Arcadia Ego Part 2” when Riker arrives with a fleet of nearly identical Starfleet ships led by the USS Zheng He. While there was some slight variation, the fact that most of the ships pretty much looked the same irked some fans. Blass says he saw all this chatter and decided to make a change for the big Season 2 fleet scene.

“I know that there's a lot of practical reasons why things happen,” Blass says of the Season 1 fleet. “But I was like, okay, I wonder if there's a way to solve this problem. To turn the obstacle into an opportunity.”

The goal was to give fans a fleet that represented the ships they know and love from the TNG, Voyager, and Deep Space Nine eras. The new Stargazer was going to take center stage, but Blass wanted the ships that arrive for back-up to be ones we know. But the Picard team was short on resources and needed more digital animators to create individual ships, so instead of creating new digital models Blass looked for where they might already exist.

To round out the new fleet for Picard Season 2, Blass contacted Star Trek: Online designer Thomas Marrone with a big idea: To put early 25th century Starfleet ships from the game on screen for the first time.

“I found these ships from Star Trek Online and I was like damn, these are really good looking,” Blass explains. “I was like ‘why are we not doing something here?’ So I reached out to Thomas.”

Blass explains that he wanted the talent of Star Trek: Online’s animators because he needed “people who know how to design Star Trek ships and that [know] a Star Trek ship is not a Star Wars ship.”

“It was kind of old hat to us,” Marrone says. “We knew what the pitfalls were, what the hard things to do were, and how you take something that's familiar and expand upon it while still making it easily identifiable. We want fans to say, ‘that's a Starfleet ship.’ That's a new version of the Galaxy [class] or whatever. It was always something I’d fantasized about, but when Dave reached out it was certainly a dream come true for us.”

For fans of Star Trek: Online, this meant that several classes of ships are now canonical, including the Ross-class exploration cruiser and the Reliant-class light cruiser. But Marrone and Blass made it clear that the entire fleet in the Picard Season 2 debut isn’t only populated by ships from Star Trek: Online. You’re also seeing a lot of ships from the latter TNG era, including the Akira-class from First Contact and the famous Sovereign-class.

“Some of those are the models from the game,” Marrone says. “But we also helped with some existing canon ships. We had a great back catalog of canon ships, they took our models and textures and brought them into their pipeline.”

If you think the bridge of the new USS Stargazer looks really big, Dave Blass wants you to know that’s (kind of) an illusion. The Stargazer bridge isn’t as big as the Discovery bridge, and only a little bit bigger than the bridge of the Enterprise-E.

“It’s 10 feet wider than [the bridge of] the Enterprise-E,” Blass says. “And mainly that’s for tactical reasons. We’re shooting widescreen with multiple cameras. The cameras are likely to crossover and you have to get that camera out of the view of the other camera.”

Blass also clarifies that in terms of overall size, the new Stargazer is “smaller” than the USS Enterprise-D from The Next Generation.

First introduced in the Next Generation episode “The Battle,” Jean-Luc Picard’s first captaincy before the Enterprise was the USS Stargazer, registry NCC-2893. But the new Stargazer is NCC-82893. Unlike some other starships that share a name, the new Stargazer didn’t get a letter affixed to its number. Instead, it just got an extra digit. Why not make the Stargazer NCC-2893-A? Or B, or C?

Blass has a good answer.

“I dropped the hammer on this one,” he reveals. “The Stargazer is an important ship, but it does not hold the status in the Federation that the Enterprise had. I didn’t feel it was warranted. Because then every ship gets it and it becomes a thing. The Stargazer didn’t have that legacy.”

For fans who think this is some kind of blasphemous deviation from canon, Blass points out that there have been several USS Intrepids in Trek canon, but those aren’t connected by an identical registry number and a sequential letter.

And just in case fans are wondering, yes, there are three versions of the USS Stargazer in Trek canon now. As glimpsed in Rios’ conference room, we see models of Stargazers from the TOS-era, the famous one from the TNG-era, and now, the new one. Blass and model-maker Bill Krause have confirmed the classes for these three Stargazers, too. The oldest one is Radiant-class, Picard’s classic one is Constellation-class. The new Stargazer is Sagan-class, probably named for Carl Sagan. (Or perhaps Nick Sagan, Carl’s son, who wrote for both TNG and Voyager!)

Digging into the nitty-gritty of Trek starship canon circles around one interesting fact: Essentially all Starfleet ships descend from the basic design of the USS Enterprise, created by designer Matt Jefferies in 1964. Why is this design so iconic, and why has it inspired so many offshoots and remixes?

“That arrangement has survived over 50 years,” Marrone says. “We’re still riffing on that. Gene Roddenberry told [Jefferies] it has to look fast, but it can’t have smoke or flame coming out of the back. So it’s gonna woosh by the camera really fast, and he needed to come up with shapes you could instantly recognize. And that’s how he landed on the saucer, and the neck and the nacelles. That added a certain grace and character, I think.”

In Star Trek V: The Final Frontier, Captain Kirk quotes the poem “Sea-Fever” by John Masefield, with the line “All I ask is a tall ship and a star to steer her by.” And Marrone thinks that notion of a “tall ship” is exactly why we still love these designs five decades later.

“It’s not X wings and it's not WWII battleships,” Marrone says. “Its age-of-sail, Horatio Hornblower. We’re still in love with that ‘tall ship.’ And that’s because it’s like a character on the show.”